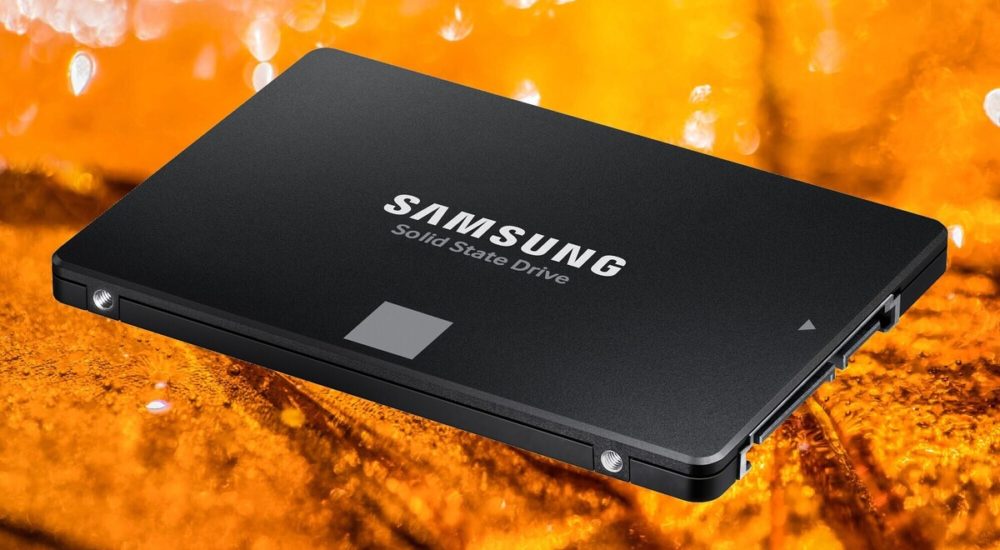 Samsung’s been at the top of the SSD storage food chain since the day the company entered the market, and the 870 EVO honors that tradition. It’s the fastest SATA SSD we’ve tested, it’s available in up to 4TB of capacity, and it’s exceedingly affordable given its speed.

The 870 EVO is a 2.5-inch, SATA 6Gbps SSD employing Samsung’s own TLC (Triple-Level Cell/3-bit) V-NAND. The company is typically coy as to on the actual controller technology or the number of layers, but it’s likely an in-house Samsung-designed controller with, judging from the capacities, 92 or 96 layers.

The drive will ship in 250GB/$50, 500GB/$80, 1TB/$140, 2TB/$270, and 4TB/$520 flavors. There’s 512MB of primary DRAM cache for every 250GB of capacity, and the drives are rated for 150TBW (TeraBytes that may be Written) or five years of service—whichever comes first. That is, the five-year warranty is invalid once you exceed the TBW rating. Most end users won’t come close to writing that much data, so consider it five years. 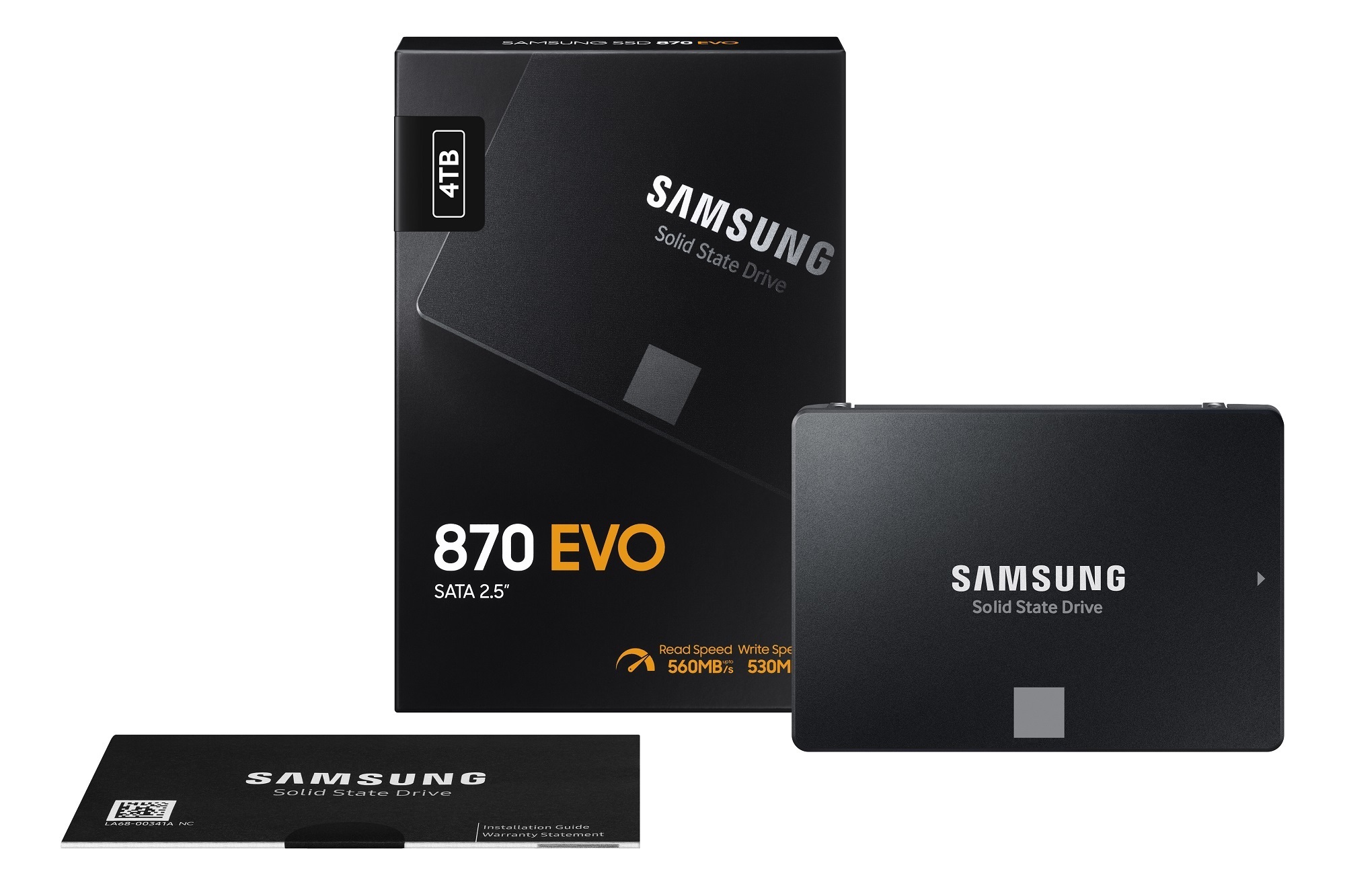 The 870 EVO uses Samsung’s TurboWrite variable secondary cache algorithm, in which the main NAND is treated as SLC by writing only a single bit per voltage level. That should allow top write performance until the drive nears full capacity. As a rule of thumb, you should stay below 75 percent of capacity when using SSDs or performance will suffer.

The 870 EVO proved the fastest overall SATA SSD we’ve tested so far, largely due to its superior performance with small files. We’re not talking the same kind of difference you’ll see with far faster NVMe technology—6Gbps SATA itself is the limiting technology. Numbers are very similar for all top-tier SATA drives. That said, the 870 EVO will cut a second or two off a lot of tasks and over the long run, that will add up.

Note that I included the 2019-era Seagate IronWolf 110 in the comparisons, as it’s one of the few drives that can keep up with the 870 EVO in all phases. However, it’s significantly more expensive and designed for SMB or the enterprise. 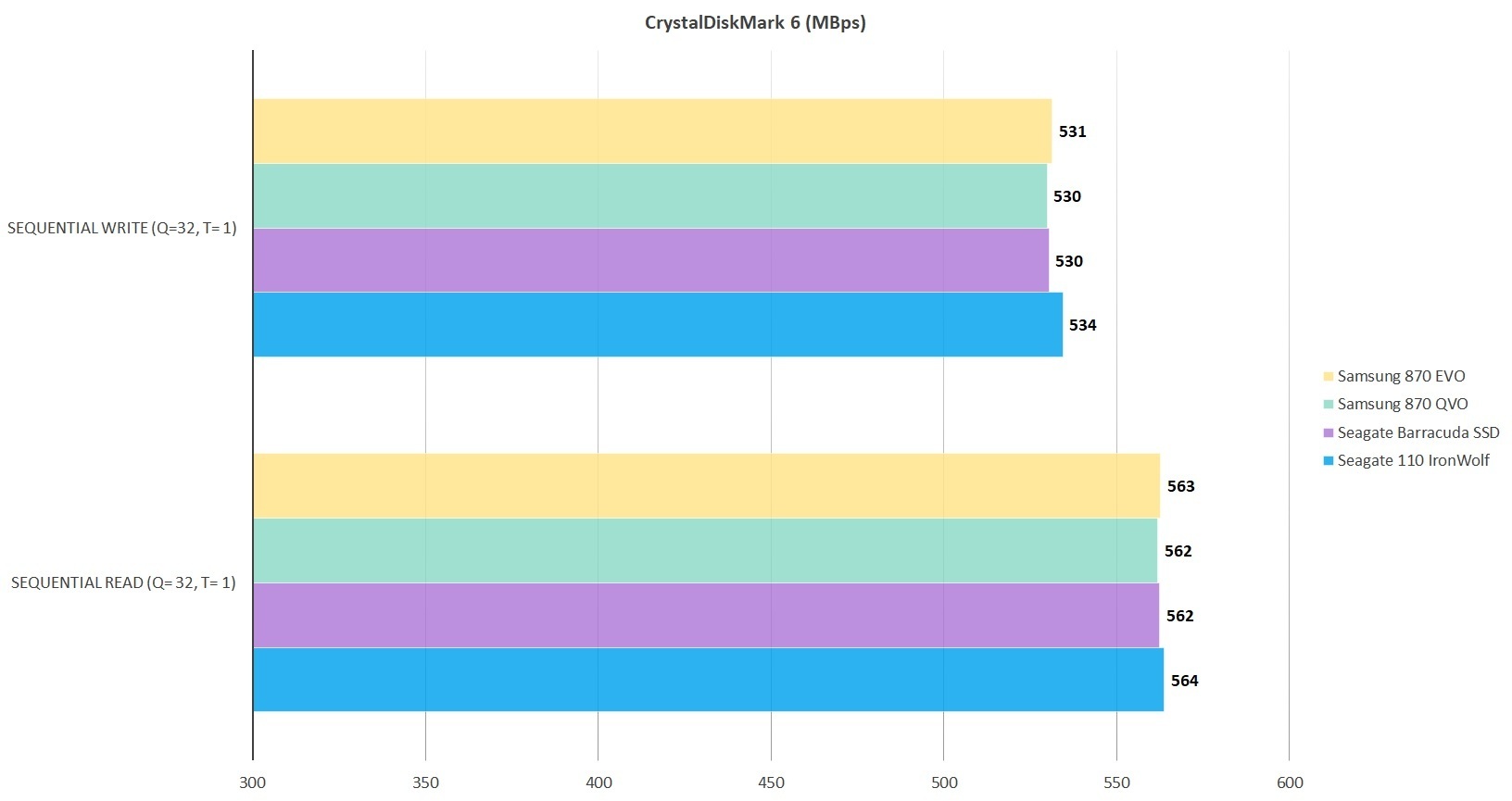 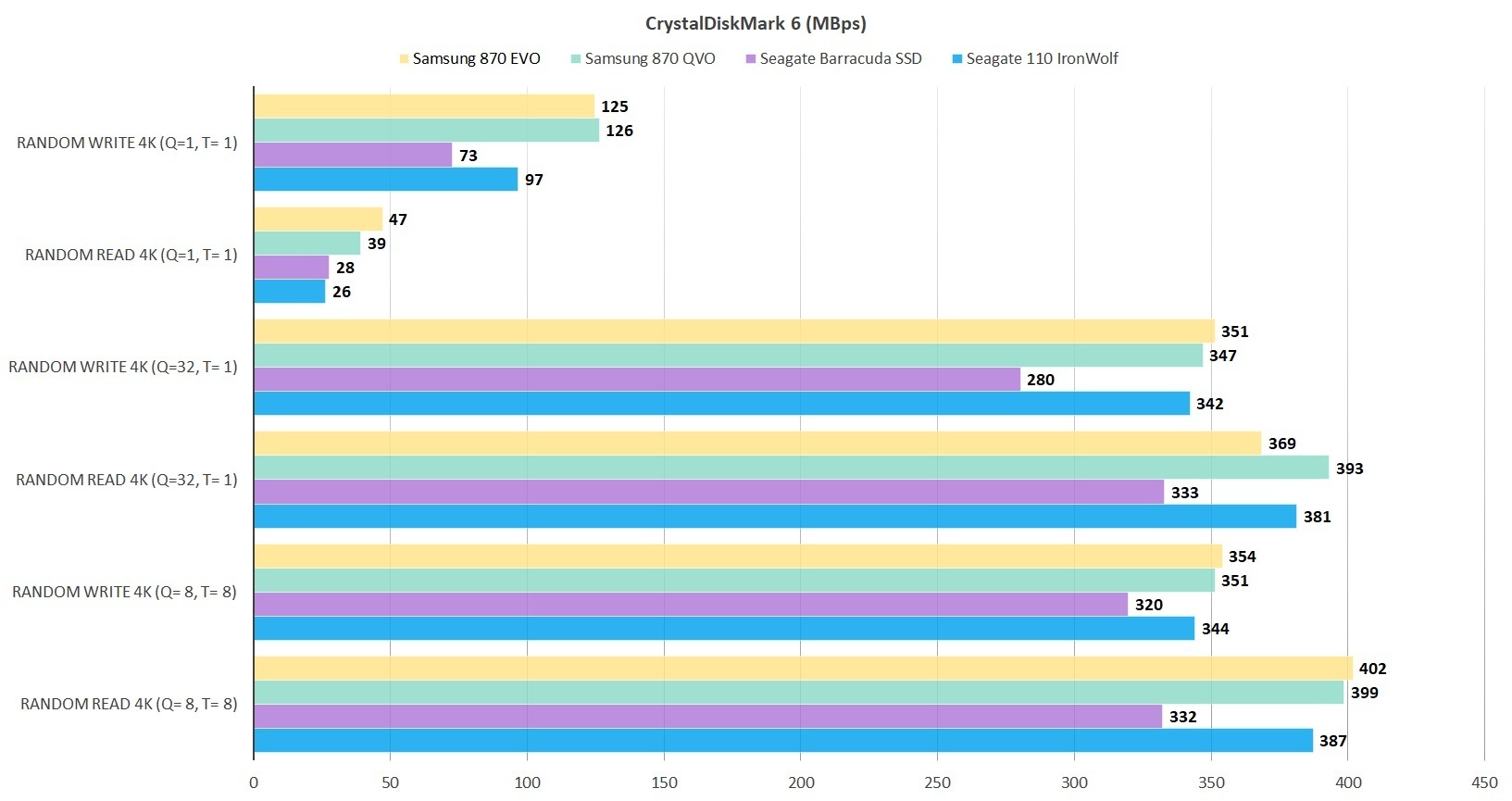 As in the CrystalDiskMark 6 sustained throughput test, the differences between the drives in our 48GB transfers were slight. The 870 EVO still took home the win by 12 seconds, or about 2 percent. 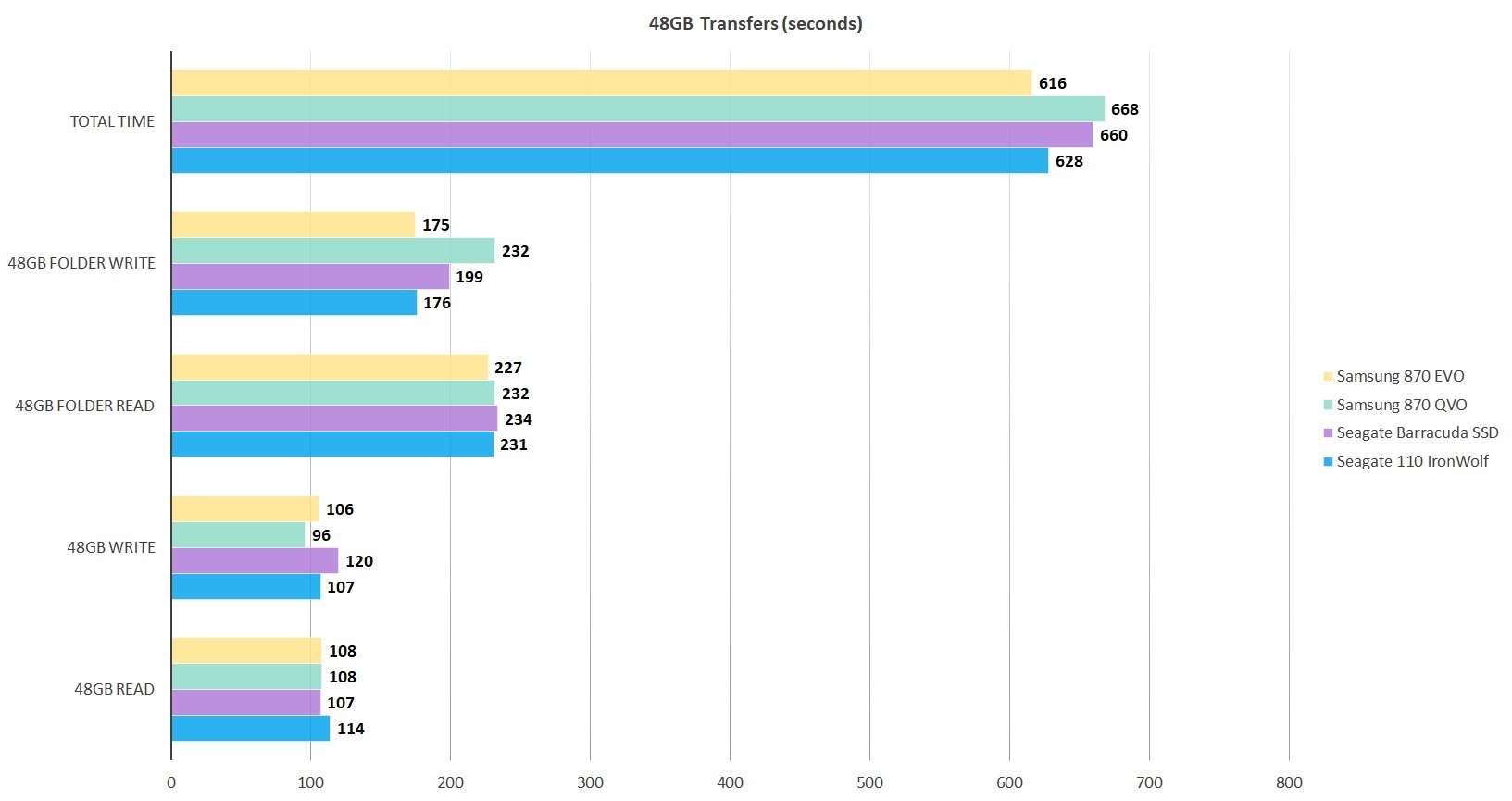 Below, you can see why the 870 EVO is a bit pricier than the 870 QVO: The latter slows down to a miserable 150MBps when it runs out of secondary NAND cache. The 870 QVO doesn’t allocate NAND as secondary cache dynamically, as does the 870 EVO. The 450GB write was performed on both the 1TB and 4TB models, resulting in a 5-second difference which is well within the expected variation. That means the TurboWrite is doing its job on the larger capacities. You might see a slowdown with the 500GB model, though it shouldn’t be as drastic with the TLC-based EVO as it is with the QLC in the 870 QVO.

Best in the price range

The Samsung 870 EVO is easily the best performer in its class, and a top performer in in any class across all usage scenarios. If you never write very large files, you could opt for the cheaper 870 QVO. Just make sure you go for a capacity well beyond what you think you’ll need. If you’re not strapped for cash, the 870 EVO is easily the better drive, the more future-proof of the two, and our recommendation.

The Samsung 870 EVO is a little pricier than the competition, but it’s also faster with small file operations. You get what you pay for, and in this case, you get a lot.