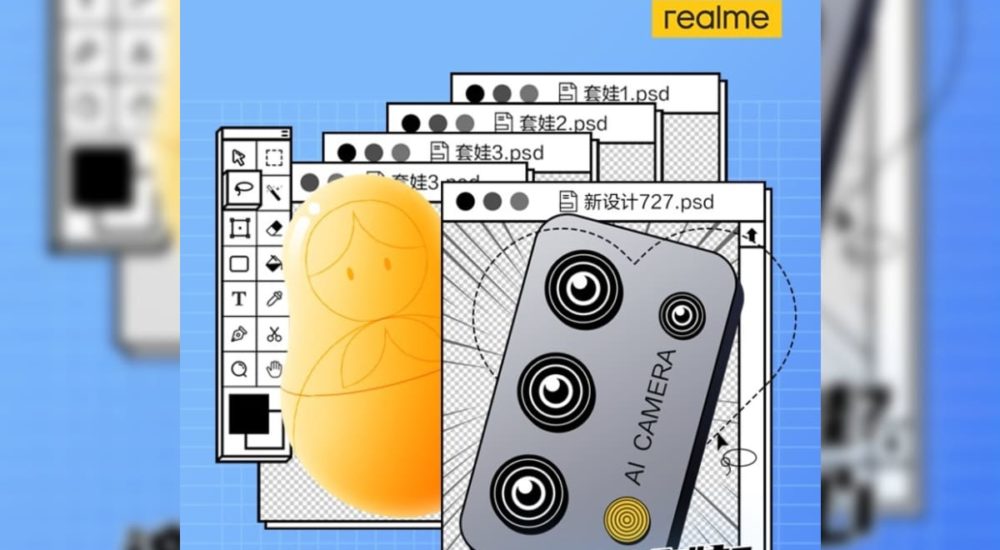 Realme has begun teasing the arrival of its new device in the Chinese market. While the first teaser indicated that the phone may have a hole-punch display, the latest teaser that was published on Weibo offers details about a possible quad rear camera setup, placed in an L-shaped manner. The quad camera setup on the back also appears to be housed inside a rectangular module. This device is rumoured to be the Realme RMX2121 phone that was spotted on TENAA recently.

The new Realme teaser that has been posted by the Chinese brand on Weibo, suggests that the upcoming phone may feature a quad camera setup at the back. The teaser hints that the cameras are expected to be placed in a rectangular housing, with three sensors placed in one line and a fourth sensor placed on the side – right next to the top sensor. The teaser also suggests that an LED flash might be placed inside the rectangular module. The text AI camera is also present in the teaser, suggesting the presence of aritifical intelligence tweaks in the camera software.

As mentioned, a previous teaser suggested that this Realme device may come with a hole-punch display. Realme CMO Xu Qi Chase has also shared a screenshot taken from the device hinting at 5G connectivity, and Oppo’s Breeno digital assistant is also expected to be present as well.

The Realme RMX2121 that surfaced in TENAA database last month is expected to be this new Realme device. The images shared on TENAA also show the L-shaped quad camera setup at the back and the hole-punch cutout placed on the top left corner of the screen. Up until now, this device is rumoured to be called the Realme X3 Pro but Realme could well introduce this device with a completely different name. Now that the teasers have started to pour in, Realme could reveal more details soon.