For cord-cutters, setting up an over-the-air DVR that delivers the best possible picture quality on multiple televisions has never been easy or cheap. That leaves a wide-open opportunity for Silicon Dust’s HDHomeRun Scribe DVR and its sibling, the HDHomeRun Servio.

SiliconDust’s HDHomeRun Scribe and Servio DVRs finally check the right cost and quality boxes, recording over-the-air channels at full quality and streaming the video to other devices (including Roku players, Fire TV Sticks, and more) connected to TVs throughout the home. The hardware is also reasonably priced, starting at $200 for everything but the antenna, as is the DVR service at $35 per year, with one year of service included. Setup is simple to boot. 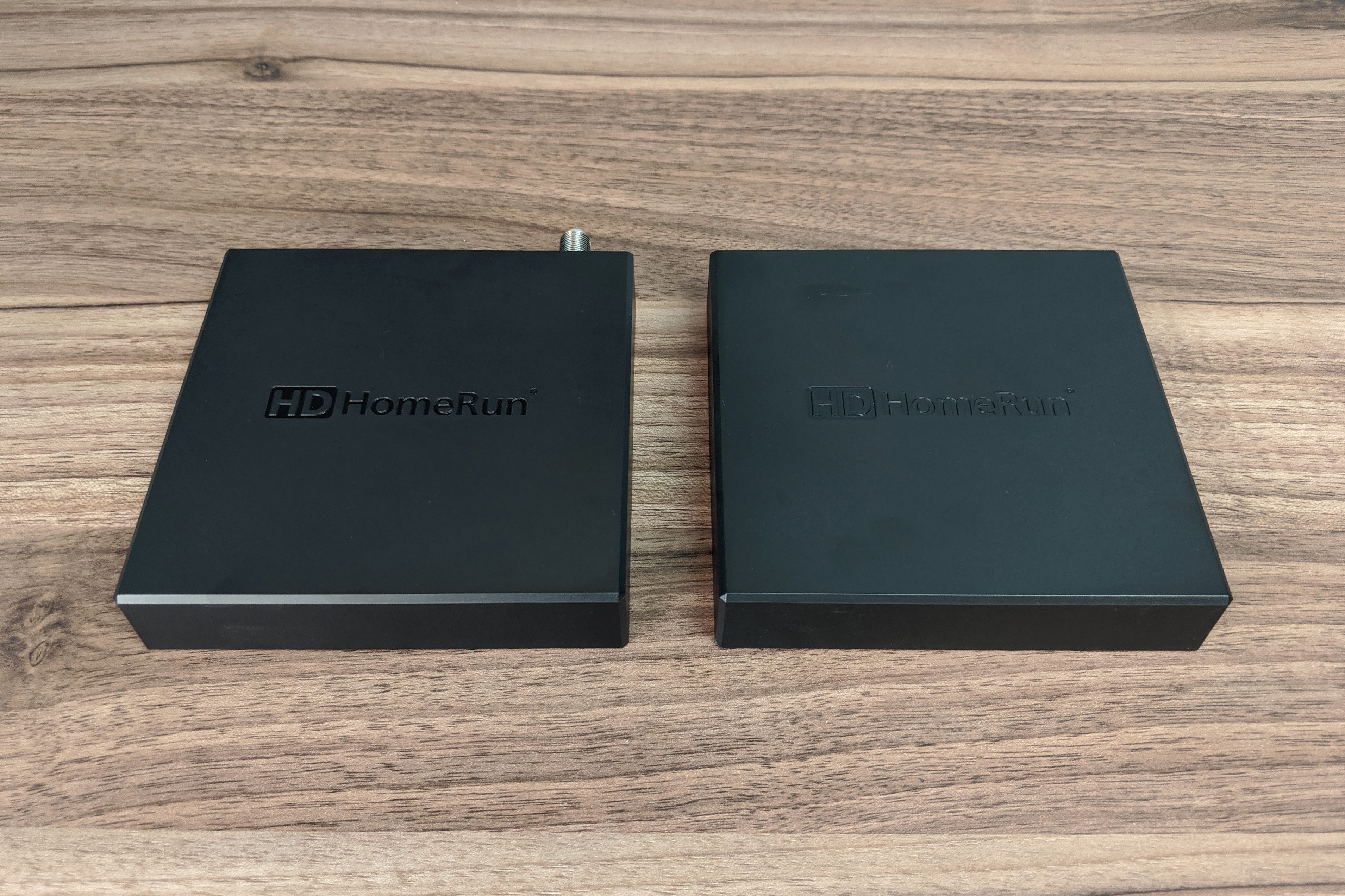 The drawback, as always, is HDHomeRun’s software, which has improved over the last 18 months, but is still harder to work with and has fewer features than other over-the-air DVRs. Whether the Scribe and Servio are right for you depend on how much of that clunkiness you’re willing to tolerate.

Unlike HDHomeRun’s Connect and Extend tuners, the HDHomeRun Scribe doesn’t require you to supply your own storage or server hardware. Instead, the recording engine, TV tuner, and 1TB of storage are all built into one box. You need only provide an over-the-air antenna, which can be an indoor or outdoor model.

Setup is practically plug-and-play as well. After screwing in an antenna, plugging in the power adapter, and connecting the box to your router with an ethernet cable, you can visit the my.hdhomerun website to finish the setup. SiliconDust sells two versions of the Scribe: The $200 Duo can play and/or record up to two channels at a time, and the $250 Quatro can play and/or record up to four channels simulltaneously. 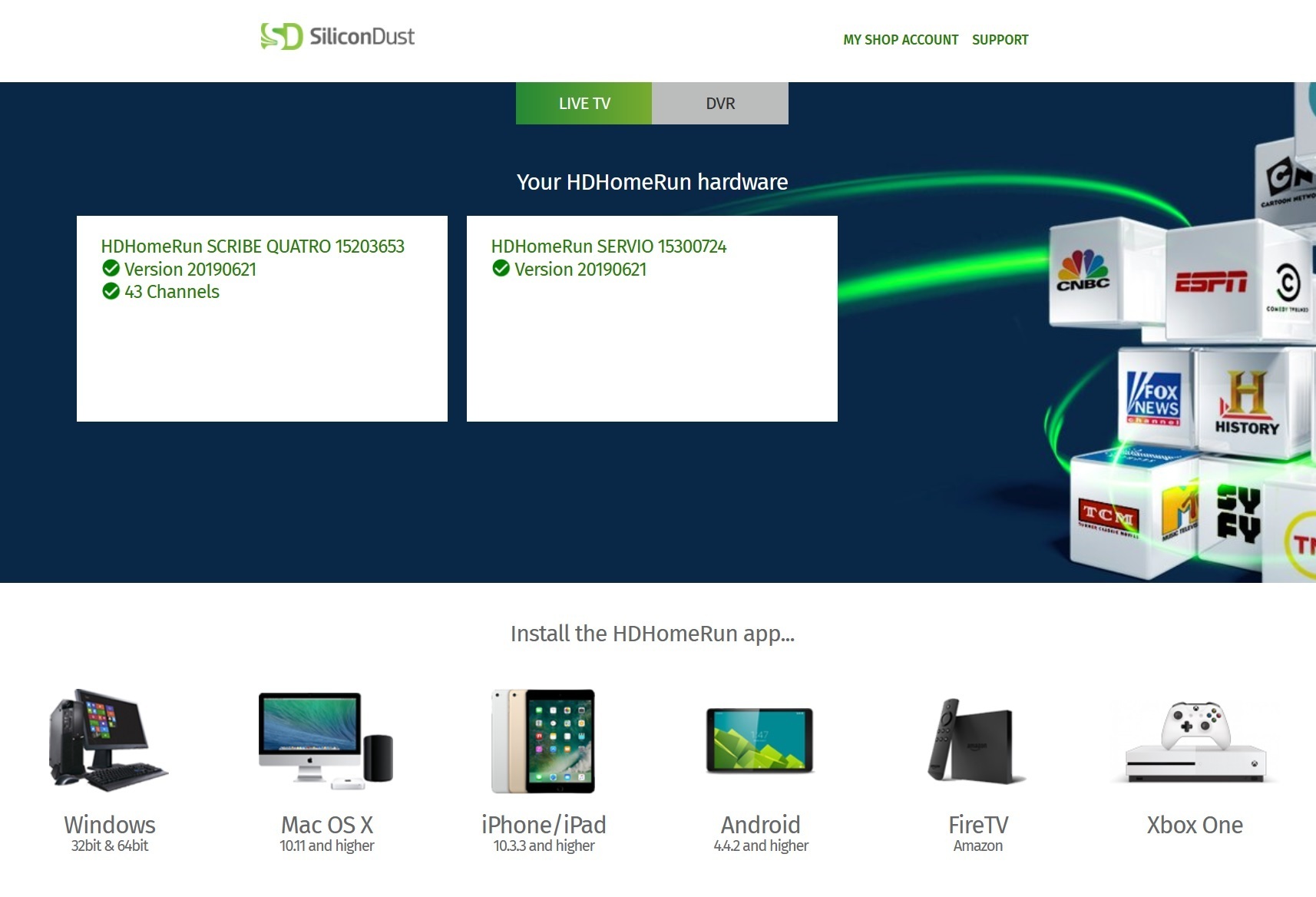 Compared to the Scribe, the $150 HDHomeRun Servio is more of an upgrade for folks who already own a separate HDHomeRun Connect or Extend tuner. As such, it includes the recording engine and 1TB of storage, but there’s no provision to plug in an antenna because it doesn’t host a tuner.

Unlike a TiVo or cable DVR, HDHomeRun does not output video directly to your television. Once you’ve set up the hardware, you must stream live and recorded TV to the HDHomeRun app, which is available for Amazon Fire TV devices, Android TV, Roku players and many smart TVs, Xbox One consoles, Windows, iOS, and Android mobile. The most notable omissions here are Apple TV, Chromecast, LG WebOS TVs, and Samsung smart TVs.

There are some caveats with this setup, though: While both the Scribe and the Servio can stream to other devices around the house over Wi-Fi, you must connect the DVR boxes themselves to your router over a wired ethernet connection. If your router is in a basement closet or other location where you can’t set up an antenna and get good reception, and you don’t have ethernet strung to that location (or you don’t want to), this solution will be a non-starter. (ethernet switches are cheap, but pulling ethernet cable through your walls is a relatively simple and inexpensive DIY project that doesn’t require an electrician, because it’s low voltage; but it’s not a project everyone is interested in taking on.) 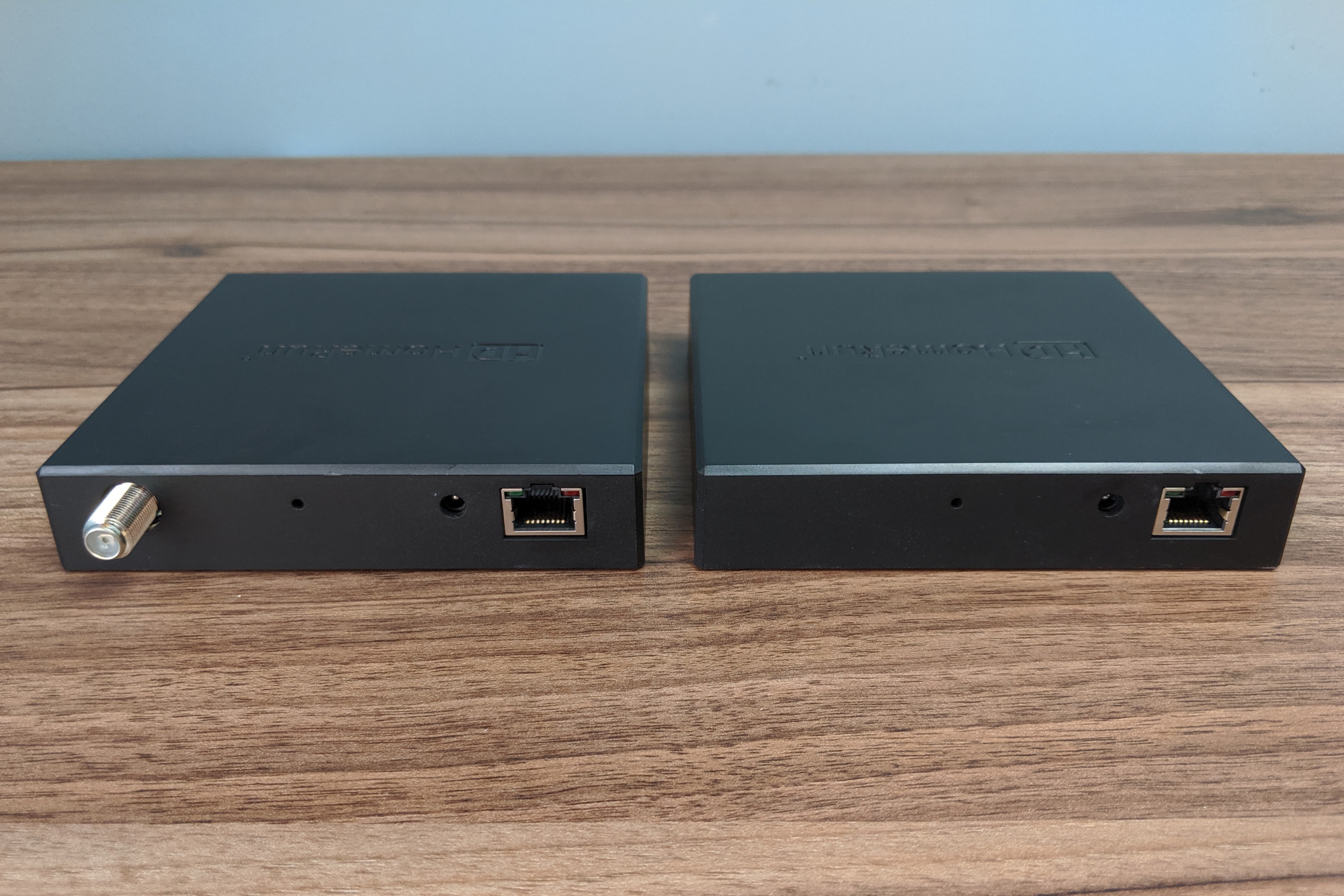 You’ll also need a strong Wi-Fi network to stream video. Because HDHomeRun serves uncompressed video in the MPEG-2 format, each stream can demand up to 20Mbps of your Wi-Fi network’s bandwidth. Using the HDHomeRun Servio with an Extend tuner can reduce the bandwidth requirements by transcoding the MPEG-2 video to a compressed H.264 stream, but that’ll cost you about $330 for both devices together—much more than the $200 Scribe Duo by itself.

Provided you have enough ethernet ports and bandwidth, however, HDHomeRun’s system is as solid as they come. I’ve run into no issues recording or watching live TV over the past couple weeks with the Scribe and Servio, the picture quality is on par with direct antenna input, and the system supports 5.1 surround sound as well.

The hardware is also expandable, so if you need more tuners or extra storage, you can just plug another HDHomeRun tuner (with its own antenna) or Servio into your router. Case in point: Partway through my evaluation, I unplugged my own HDHomeRun Extend tuner and connected the Scribe in its place, running it alongside the Servio I’d already been testing. HDHomeRun recognized the new hardware and added it to my DVR pool without missing a beat.

Software, by SiliconDust’s own admission, has historically been HDHomeRun’s weak point, which is why I’ve typically used the hardware in conjunction with third-party DVR software, including Plex and Channels DVR. Those aren’t options with the Scribe or Servio, which are only designed to run HDHomeRun’s own recording service.

So can HDHomeRun’s DVR software stand on its own? That depends on your feature expectations and tolerance for interface annoyances.

For live TV, HDHomeRun still uses a novel programming guide (which it calls “SliceView”) instead of a traditional grid. Programs appear in a strip along the right side of the page, and scrolling right pops out a description and future listings for whatever channel is currently highlighted. This does have the advantage of minimizing how much information blocks the screen while you channel surf, but it requires a lot more clicking to see what’s coming up next, and visually it’s a big adjustment coming from most other TV guides. 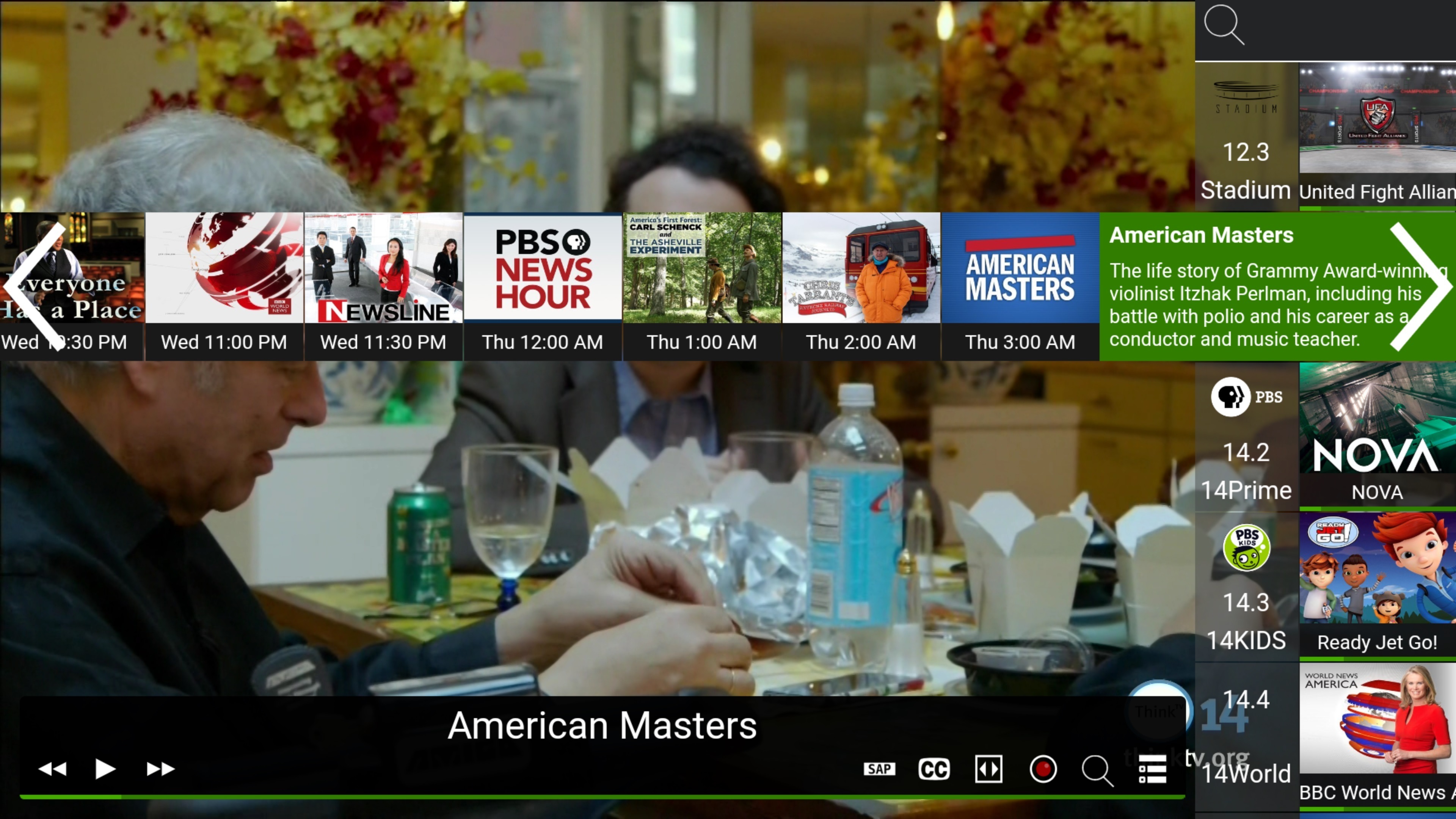 Elsewhere, the HDHomeRun interface can be cryptic or inconsistent. There’s no visual preview or even a readout of playback time when you fast forward or rewind through a program. That means it’s hard to know what you’re skipping through when a commercial break comes up. And if you watch a recording that’s still in progress, there’s no prompt to watch live instead of from the beginning, like most DVRs offer.

Getting to the DVR menu also isn’t obvious—you have hit a little bullet point button in the playback control menu—and creating team-based sports recordings is a confusing process. (HDHomeRun shows all events from a given league under one page, and to filter individual teams, you must counterintuitively hit an “All Teams” button. Doing so creates a team recording without further prompts or confirmation.)

On top of all that, HDHomeRun’s apps are just kind of ugly, with a lime green color scheme and a bubbly background pattern that would look at home on late 1990s desktop PC. Previously-announced plans to add animations, transition effects, and movie trailers haven’t come to fruition either, further reinforcing the apps’ outdated feel. 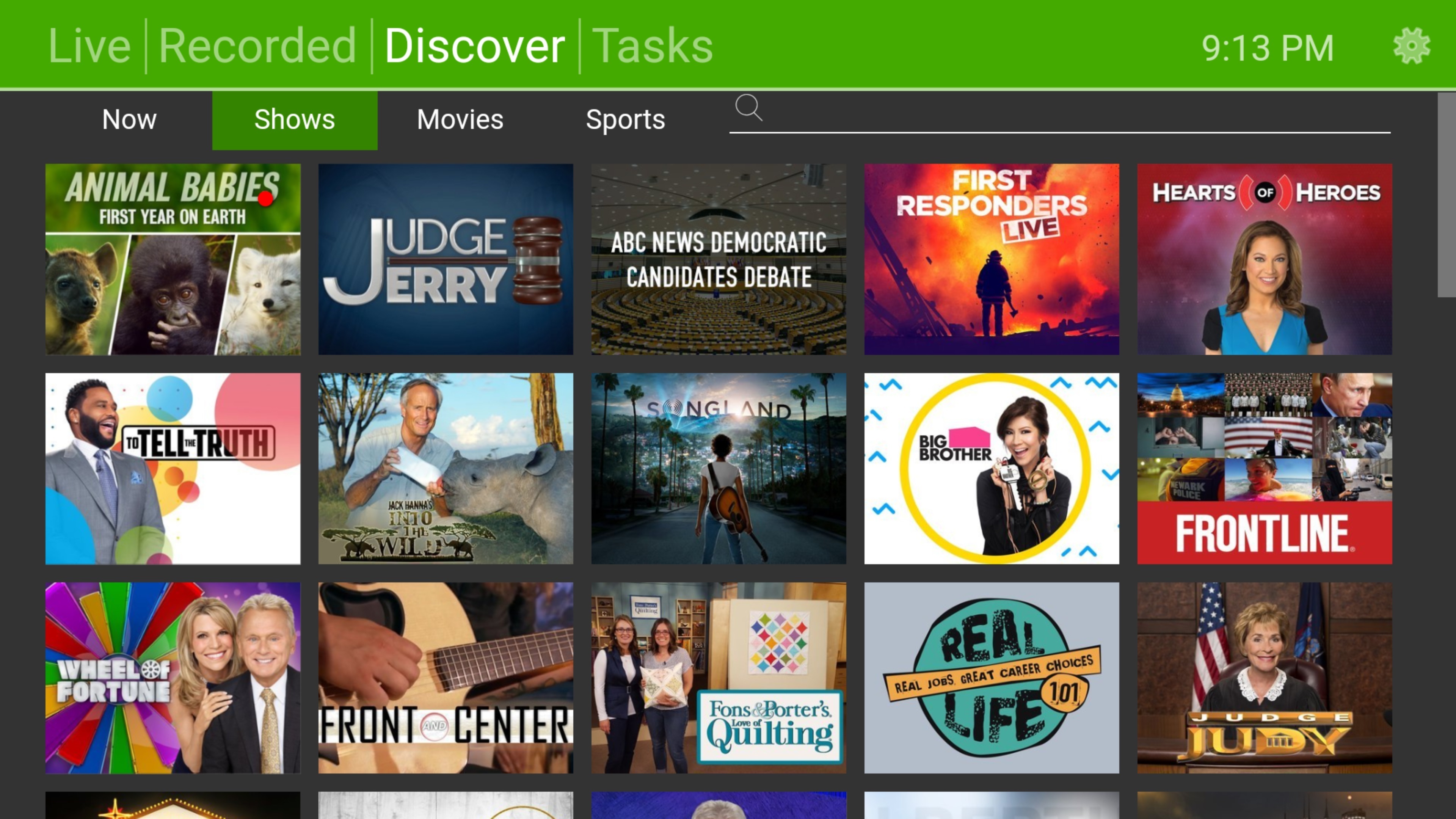 HDHomeRun’s interface isn’t all bad, though. The “Discover” tab is helpful for finding thing to record, letting you browse through cover art for upcoming movies, shows, or sports. The recording menu also segments programs into TV shows, movies, and sports, and you can sort each program’s recordings by title, episode number, or air date. Once you get the hang of it, it can start to feel somewhat efficient. 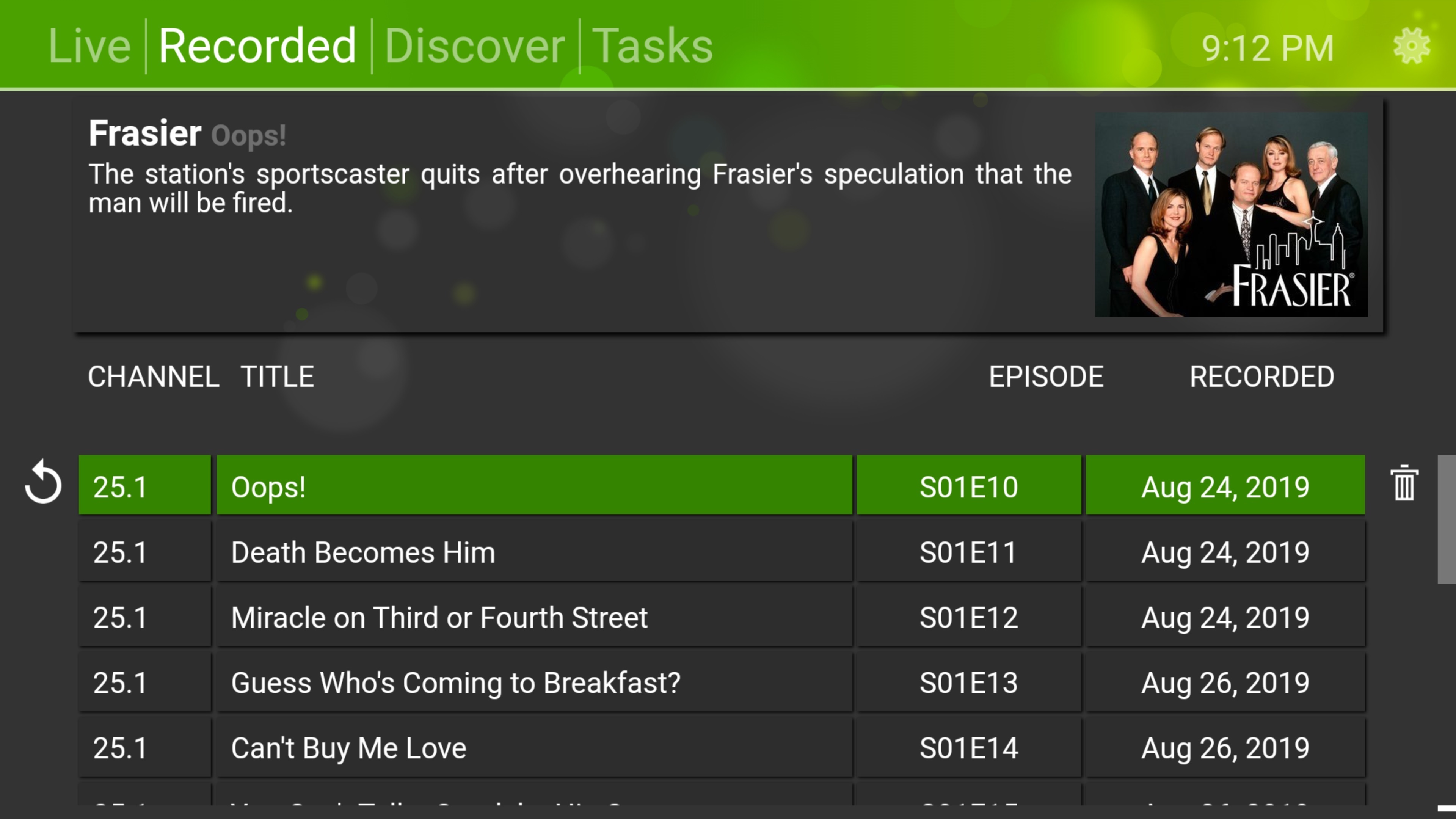 Perhaps the bigger issue is that while HDHomeRun still has to refine its basic interface, other over-the-air DVRs are leaping further ahead on features.

Automatic ad-skipping, for instance, is now available from TiVo, Tablo, Plex DVR, and Channels DVR. Those DVRs also offer out-of-home viewing on mobile devices (and in some cases, on streaming players), as does Amazon’s Fire TV Recast. HDHomeRun offers neither of those features.

Meanwhile, HDHomeRun’s Roku app is in beta, and it shows. To access recordings, you must first install beta firmware on the Scribe or Servio via a Windows or Mac app, and even then, you can’t use the Roku app to manage or create new recordings. The Roku app also has a different interface from other platforms, which can be jarring if you also use a Fire TV or other devices around the house. 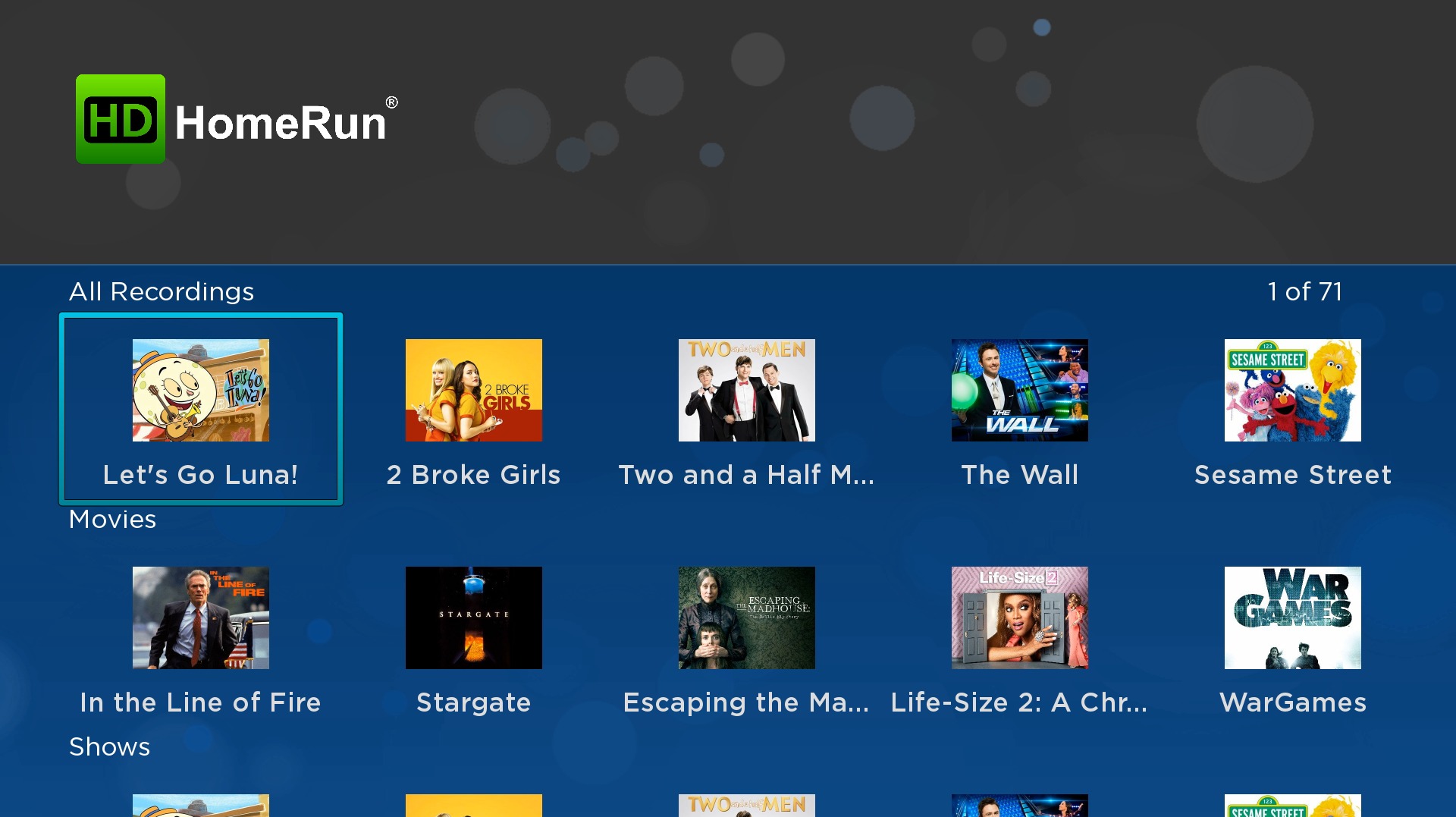 HDHomeRun’s recording options are on the sparse side as well. You can save individual episodes, avoid recording reruns, and set buffer times at the beginning and end of a recording, but that’s it. There’s no manual recording on a schedule, no way to auto-delete more than a certain number of older episodes, and no way to record only from specific channels.

HDHomeRun doesn’t even provide a proper recording schedule to weed out potential conflicts, nor does it give you a list of recordings to cancel when you create a conflict. The best you can do is reshuffle programs in the “Tasks” menu and hope for the best. Compared to other products, this just doesn’t feel like a complete over-the-air DVR solution. 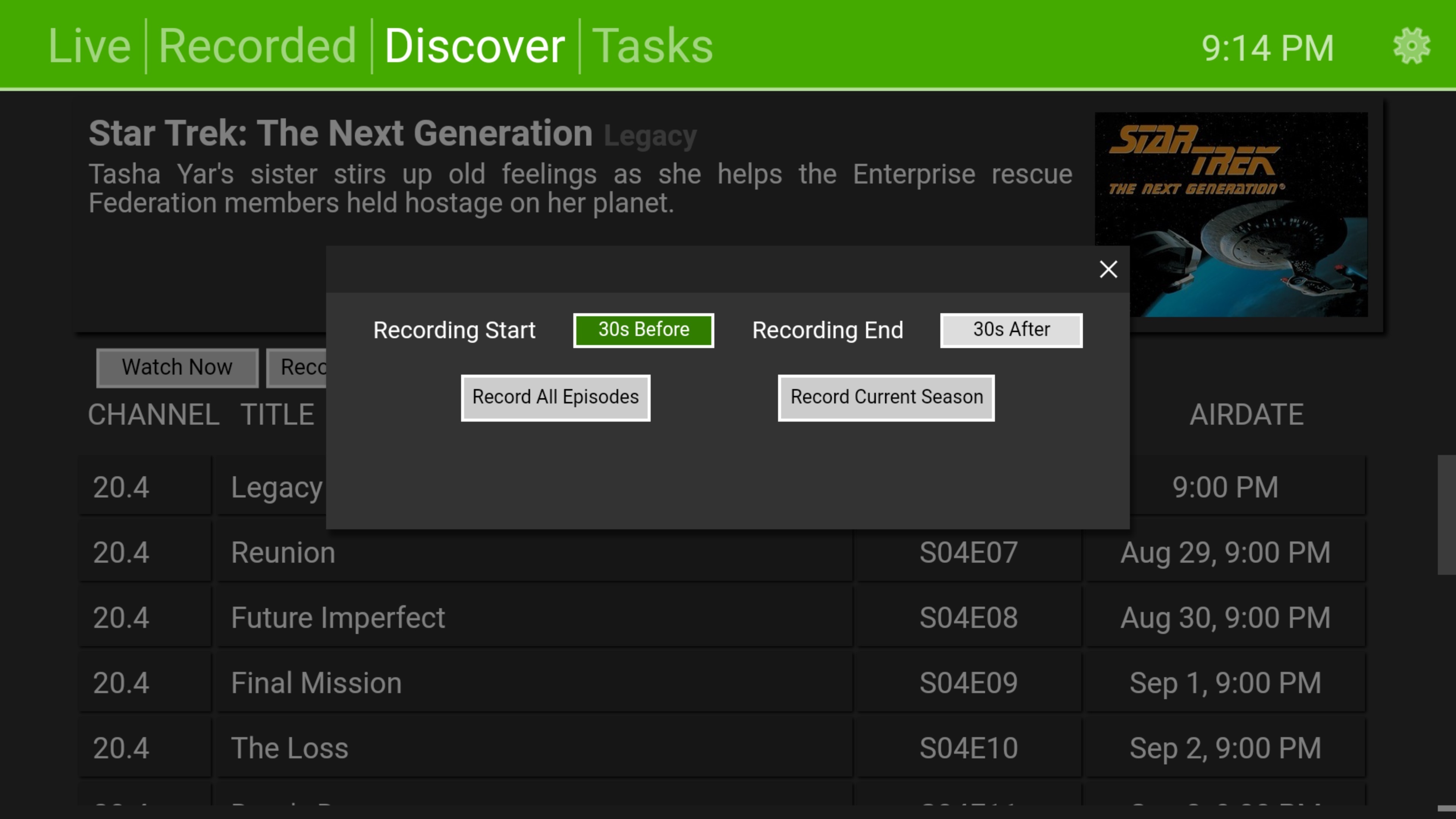 If it sounds like I’m being harsh, it’s only because SiliconDust has the bones of something great on its hands with the HDHomeRun Scribe and Servio. There’s a real need for a whole-home, over-the-air DVR that’s inexpensive, easy to setup, compatible with a wide range of streaming devices, and capable of preserving broadcasts at their original quality. Both products deliver on all of those counts. Because the hardware is so good, it’s all the more frustrating that the software isn’t.

Sticklers for video quality might find value in the Scribe and Servio anyway. But as before, there’s still a strong case for rolling your own DVR with an HDHomeRun Connect or Extend tuner, separate media server hardware, and third-party software—even if that introduces its own set of headaches.

HDHomeRun’s whole-home DVR hardware streams native quality broadcasts on the cheap, but the software is still too crude.