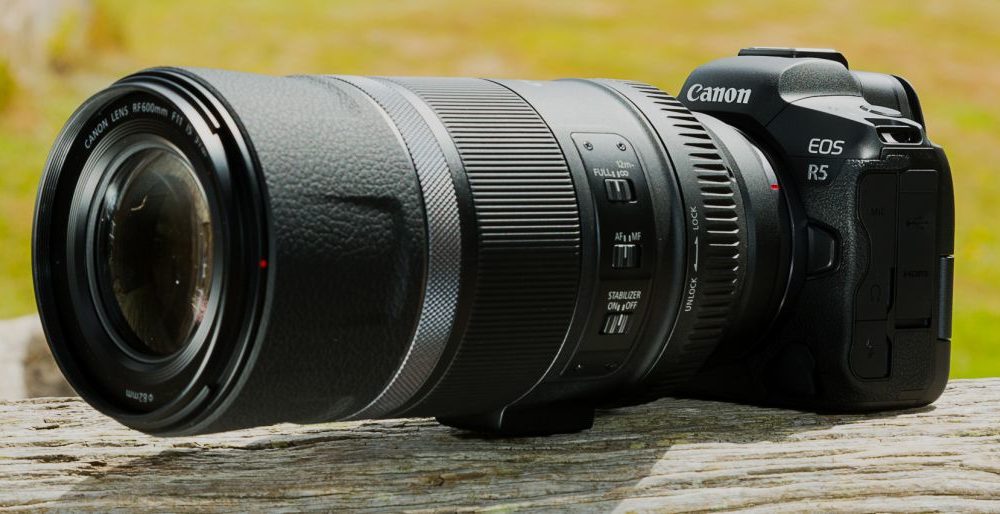 The Canon EOS R5 is shaping up to be the game-changing mirrorless camera we hoped it would be. A true hybrid that’s just as powerful for video as for stills, it will be a seriously tempting option for everyone from landscape shooters to pro videographers. If the image quality and IBIS performance matches its early promise, it’ll be a flagship camera with few compromises – apart from that price tag.

Update: Our Canon EOS R5 hands-on review has been updated to reflect the fact that the camera is now available to purchase. Here are our impressions of the Canon R5.

The Canon EOS R5 is a supercomputer buried in the body of a full-frame mirrorless camera that’s the size of last year’s Canon EOS R – you can pretty much close your eyes and stab your finger on the EOS R5’s spec sheet for its most impressive ability.

At 45 megapixels, it’s the highest-resolution camera on Canon’s books except for the EOS 5DS from 2015. It shoots full-resolution stills at up to 20fps using the electronic shutter, or 12fps using the mechanical shutter, for up to 350 JPEGs or 180 raw files. 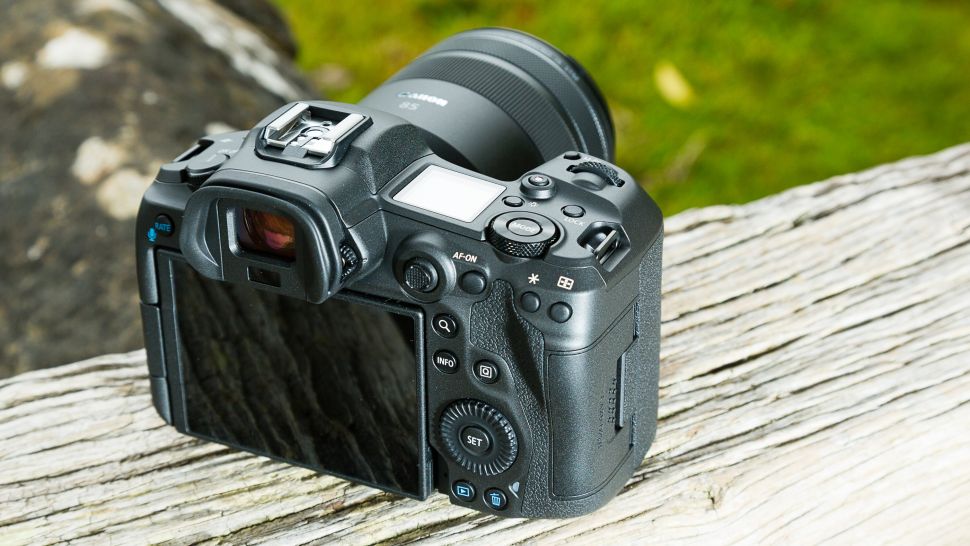 Along with its more affordable Canon EOS R6 sibling, it’s also the first Canon camera to offer in-body image stabilization, across all five axes. Use it with compatible, stabilized lenses – or even ones with no built-in IS, like the RF 28-70mm f/2 – and Canon claims you can get a frankly silly eight stops of stabilization. Couple that to its maximum ISO of 102,400, and it’s a camera that promises great things in virtually any lighting situation.

We could run through the landmark specs for hours, but what’s the Canon EOS R5 actually like to hold and use? We were treated to a quick play with a pre-production model to find out.

The camera is available in stores and online now from retailers like B&H Photo in the US, Wex or Park Cameras in the UK and, if you’re in Australia, you can get it for as low as AU$6,548 from Camera House.

That’s some serious cash, particularly during a global pandemic, but bear in mind that it’s only a shade more than the lower-resolution, 4K-only, older Sony A9 Mark II and the newly announced Sony A7S III in most regions. It’s also very much in the ballpark of the Canon EOS 5D Mark IV’s original pricing, which started at $3,499 / £3,599 / AU$5,060 when it launched in 2016. 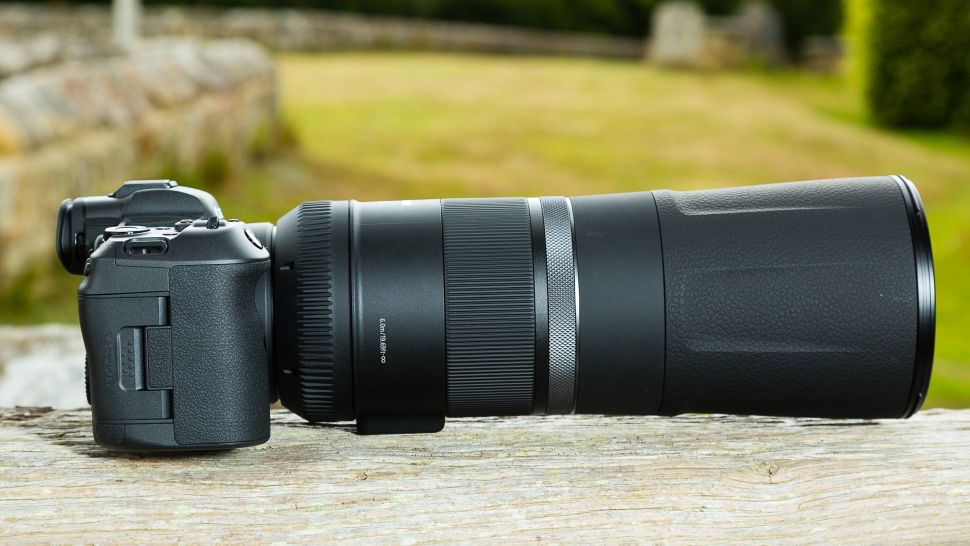 Design-wise, we’re not looking at a game-changer with the Canon EOS R5. But given the usability of the Canon EOS R, which it’s heavily based on, that’s no bad thing.

Significantly, the EOS R’s touch bar – the touch-sensitive strip on the top-right of the camera – is gone, perhaps testament to its lukewarm reception. In its place is a chunky, knurled joystick for navigating autofocus points and menus, along the lines of the control on Canon’s other high-end cameras. 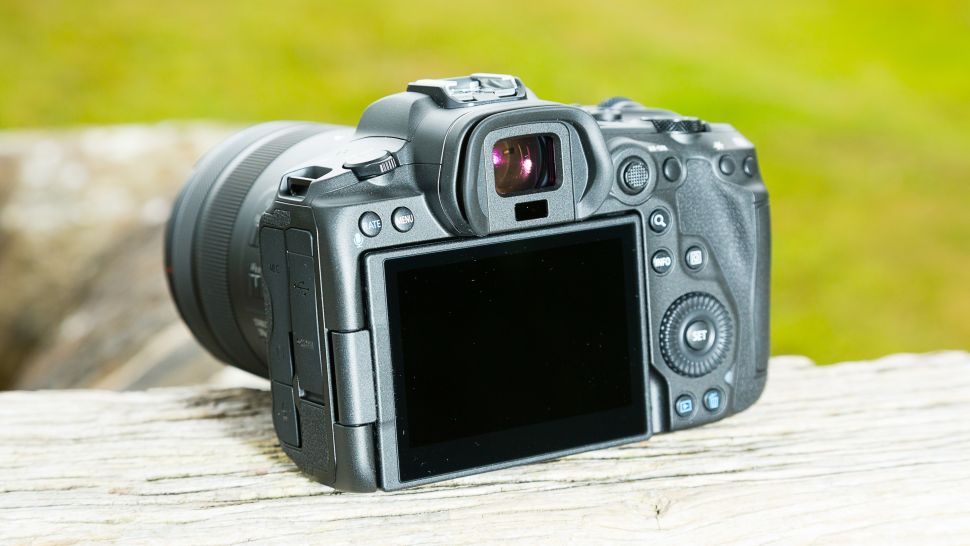 The superb, touch-sensitive autofocus point controller on the Canon EOS 1D X Mark III is, sadly, absent. But, as on the EOS R, you get a small, high-contrast square display on the top of the camera which shows current shooting information.

The monitor on the back of the EOS R5 shares its specifications with the unit on the EOS R – it’s a 3.15-inch, 2.1MP vari-angle touchscreen – but the electronic viewfinder gets a substantial upgrade.

It’s the same size, at 0.5 inches, and it’s still an OLED, but where the EOS R’s excellent viewfinder had a resolution of 1280 x 960, the EOS R5’s is much more refined, at 1600 x 1200, or 5.69MP. That makes it easier on the eye, and easier to judge whether you’ve caught focus or not without having to resort to the time-consuming practice of using either focus peaking or image magnification to double check. 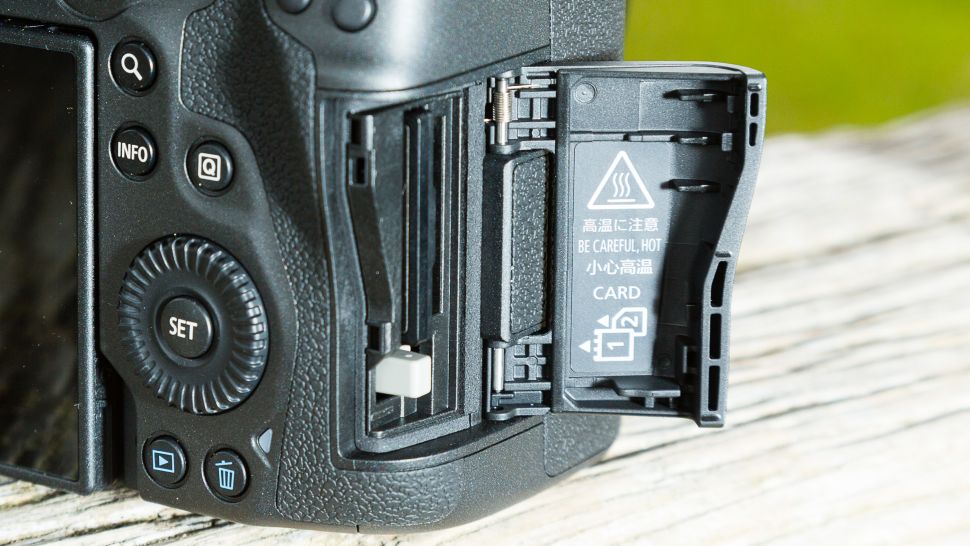 All this performance means the EOS R5 represents a tough task for Canon’s battery technicians, and to that end the R5 has an improved cell compared to the EOS R’s, the LP-E6NH.

The new unit offers 2,130mAh against the old one’s 1,865mAh, and claimed performance – per CIPA’s famously conservative testing – is up to 490 stills if you frame up using the large touchscreen monitor, or up to 320 shots using the EVF.

You can pretty much bank on more, although the mantra of all mirrorless photographers (“carry a spare battery, perhaps two”) is unlikely to become redundant anytime soon. Like all mirrorless cameras, the EOS R5 can’t hope to compete with the claimed battery lives of DSLRs such as the Canon EOS 5D Mark IV, with its up-to-900 frames from a charge.

On the plus side, you’ll be able to opt for the BG-R10 battery grip, which accommodates a pair of batteries and a set of vertical-orientation controls – and the truly monied can go for the WFT-R10B, which adds a pair of batteries as well as the ability to file images via SFTP, plus a full-size gigabit Ethernet port.

The Canon EOS R5’s headline specs are eye-popping: 45MP stills… burst shooting up to 20fps… 8K video. It’s the first R range camera (along with the R6) to include in-body stabilization; use it with the right stabilized lenses and it will offer up to eight stops of compensation.

As mentioned above, you’re also getting a new battery, and it’s an improvement over the power pack in Canon EOS R and Canon EOS RP, with the new model offering 17% more capacity than the battery that came with previous RF-mount cameras. 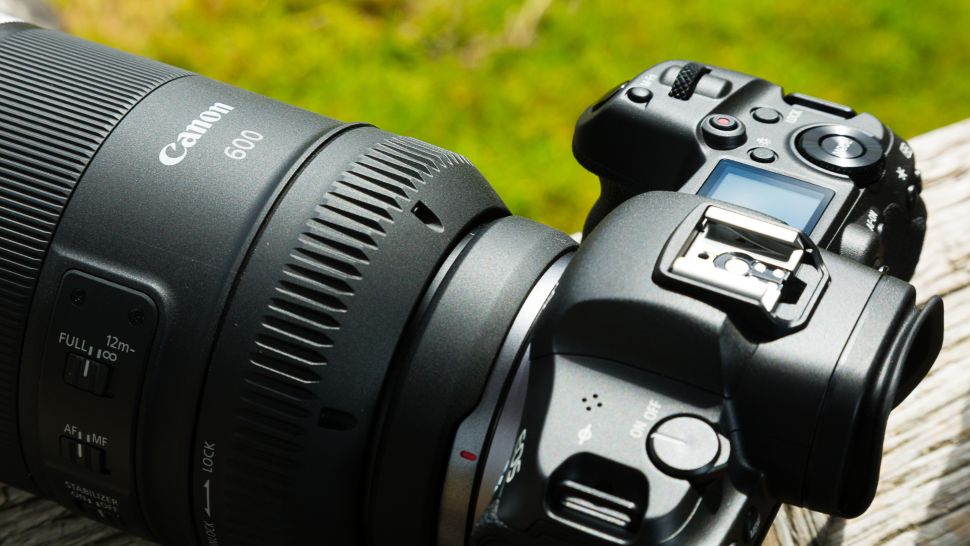 Flick the mode selector to video and you’re greeted with yet more out-of-this-world performance. 4K, naturally, but up to 120fps, and with the option of shooting raw.

Thanks to some clever internal design – keeping heat-generating components away from each other, for example – the expectation is that you’ll be able to film 8K in impressively long chunks, perhaps 20 minutes or more. Assuming that you’ve got the cards and storage to accommodate such gigantic files, 8K footage will be a potential godsend for those who master in 4K but want to crop, trim and rotate their footage without losing valuable pixels. 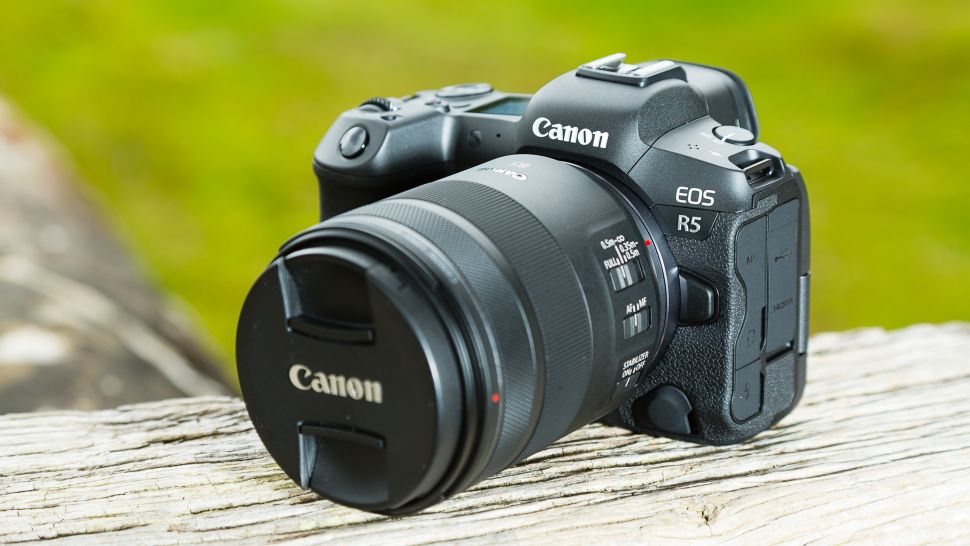 Speaking of autofocus, the R5 offers autofocus points across the full width and height of its full-frame sensor, if you shoot with automatic selection turned on. If you opt for single-point autofocus, you get your choice of 5,940 points in stills mode or 4,500 points in movie mode.

The EOS R5 uses an upgraded version of Canon’s tried, tested and terrific Dual Pixel autofocus system, and although we’re waiting for the chance to test the camera for a longer period, we’re expecting this to be a camera that will suit sports photographers as well as it does portrait artists. You also get face detection, as well as animal recognition for dogs, cats and birds – again, further testing is needed, but it would be surprising if the system was blind to other species. 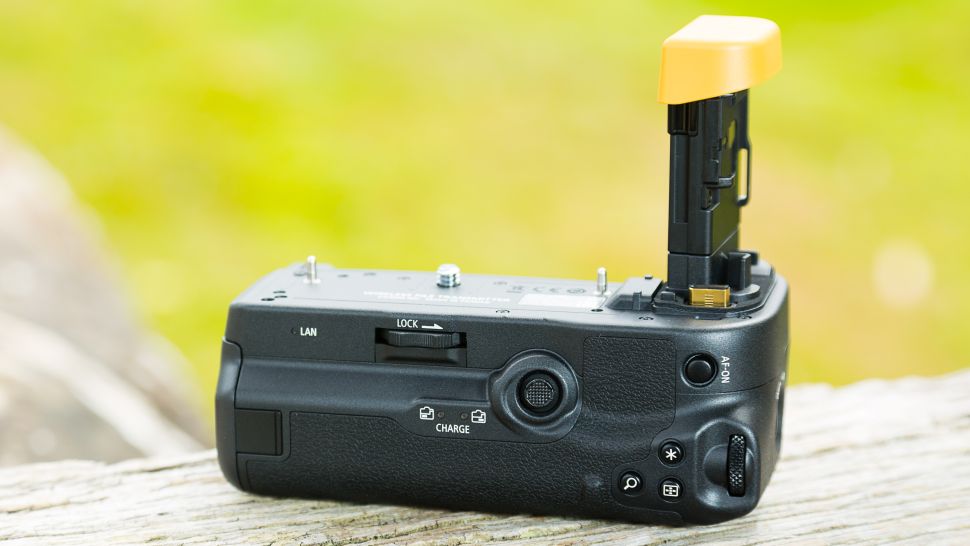 Flip open the memory card door and there’s another nod to pros: a pair of slots, one SD slot and one new-fangled CFexpress slot. Professionals who simply can’t abide the thought of shooting to a single card will need to brace themselves, though, because adding a CFexpress card to your stock of storage is currently very expensive, per gigabyte.

You also get internal 802.11a/b/g/n/AC wireless at Bluetooth 4.2, including the ability to upload to an FTP site via Wi-Fi – handy for news shooters. Those with truly demanding clients can opt for the WFT-R10 wireless transmitter, which includes a pair of battery slots as well as the ability to transmit via SFTP or via the gigabit Ethernet port. 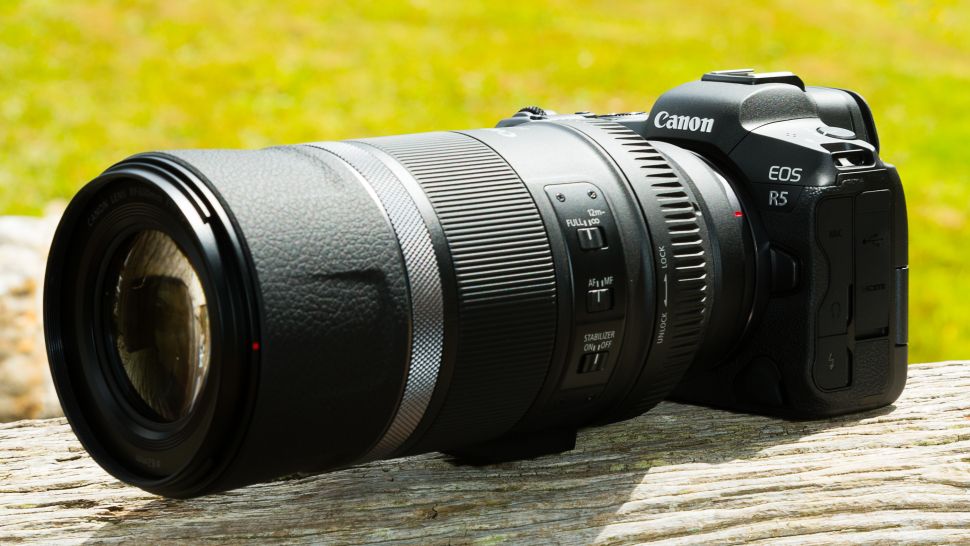 Color us very excited. In fact, color us excited in 8K, because the EOS R5 might be the most powerful, capable and exciting camera since the dawn of mirrorless.

Its pure power – whether in its Dual Pixel autofocus system, its straight-line speed of up to 20fps, or its best-in-class video resolution – all in a small, lightweight package, make it a dream for amateur photographers, albeit an extremely expensive one.

Perhaps a more likely scenario is seeing the EOS R5 adopted by professionals. Battery life is likely to remain a stumbling block, but the combination of performance and size will pose a significant conundrum to those who previously considered themselves Sony stalwarts.

All that performance in a body weighing just 738g with a battery and card installed. Image quality is yet to be seen – we’ve only handled was a pre-release sample that we weren’t allowed to shoot with – but it hardly feels like a huge risk to venture that Canon’s impressive legacy when it comes to full-frame, pro-grade DSLRs bodes pretty well.

After years of Sony dominance, the Canon EOS R5 has the potential to blow the market wide open.