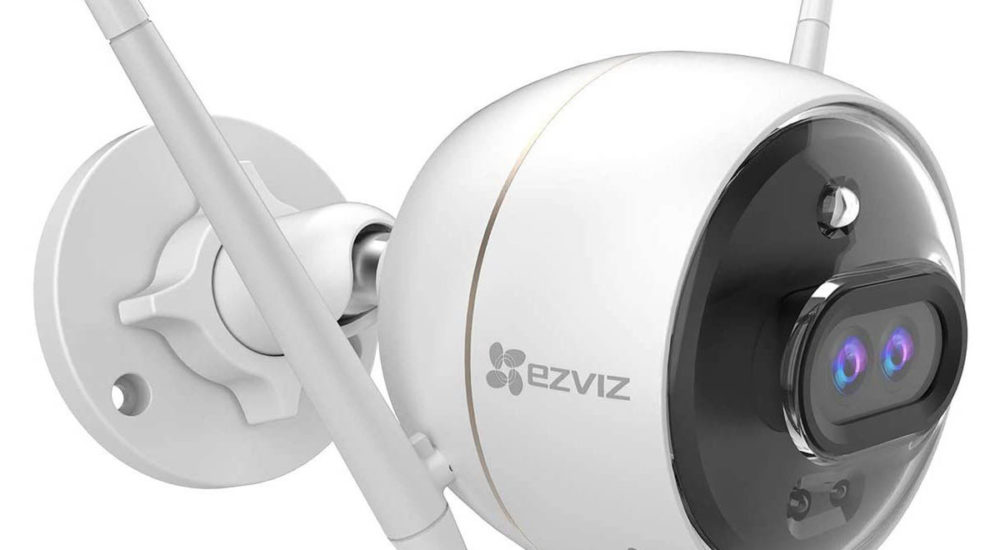 EZVIZ has consistently delivered home security cameras with tried-and-true features and seamless performance. Their latest, the C3X outdoor camera, is notable for a couple of reasons: It includes color night vision, still a relative novelty for consumer cameras, and it’s the first EZVIZ camera that I’ve experienced a fairly significant issue during testing—a complete inability to access motion-triggered video stored in the cloud via the company’s subscription storage plan. That’s a disappointing flaw in this otherwise great camera.

The C3X looks similar to the model C3WN we reviewed previously, a tennis-ball sized unit with dual antennas. It can be angled on its supporting arm, which is attached to a metal mounting plate. A 15-inch tail is hardwired to the back of the mount and splits into a power jack and an ethernet connector in case you’d prefer to use a wired connection to your router rather than Wi-Fi (but there is no support for power over ethernet). The camera has a strong IP67 weatherproof rating, meaning it’s dustproof and able to withstand immersion in up to one meter of water for 30 minutes. (You can read more about IP ratings in this story.)

The camera achieves color night vision with a dual-lens setup that uses one lens to record the scene’s ambient brightness and the other to capture color information. The two images are then merged using EZVIZ’s proprietary algorithm to create a detailed image with rich, realistic color. The camera captures 1080p video and has a 106-degree field of view. In addition to viewing video on your phone, you can stream it to Amazon Alexa or Google Assistant smart displays such as the Echo Show or Google Nest Hub. 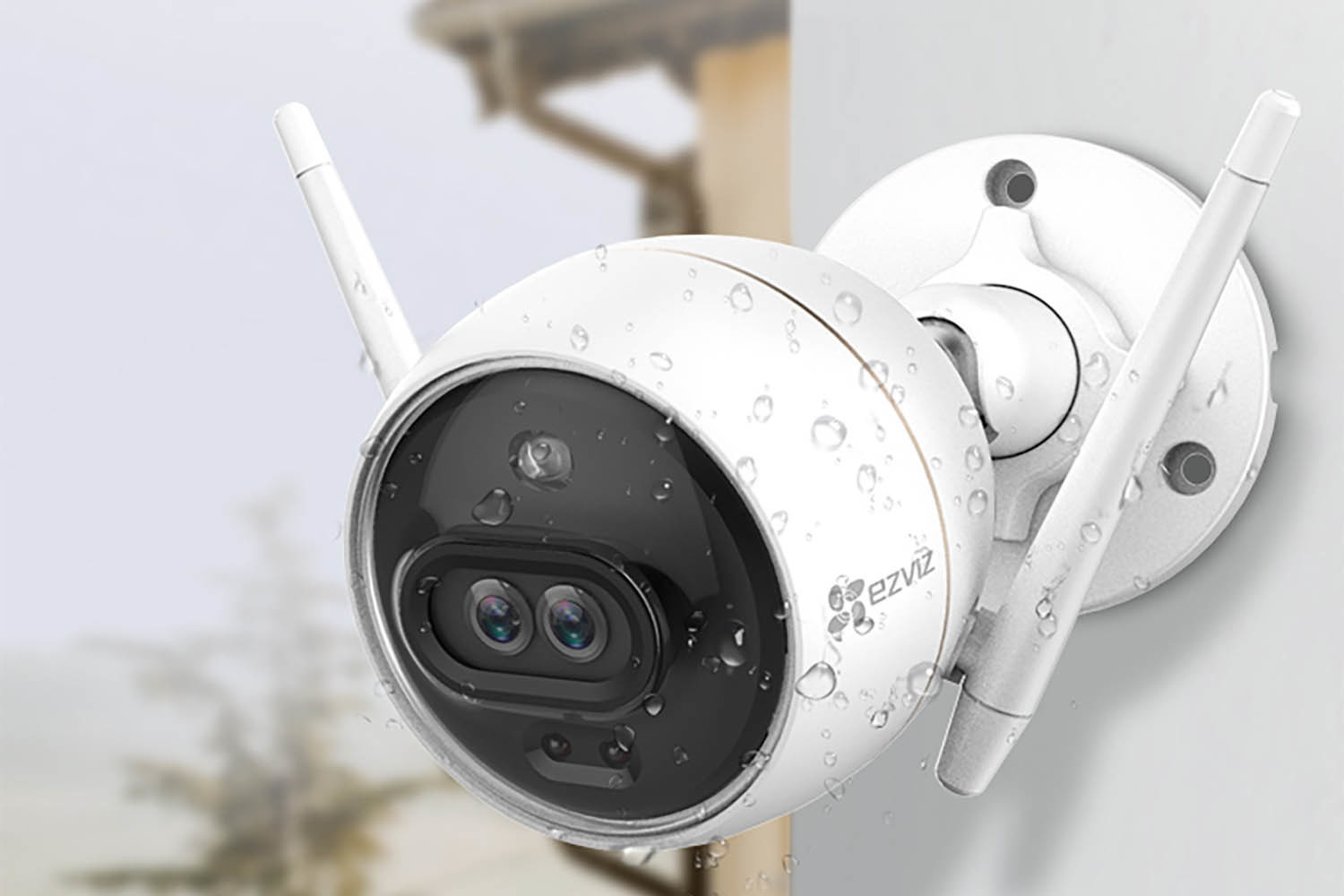 You can communicate with delivery people, guests, and anyone else within vicinity of the camera using its onboard microphone and speaker. You can also scare off more malicious visitors with the 100dB siren.

The C3X can detect motion and will record video and push an alert to your phone when it does. You can opt to have it issue an audio warning, as well. With the Intensive setting enabled, a prerecorded voice warns “secure area, please leave as soon as possible.” A Soft setting issues a gentle beep, and Custom setting allows you to record a message in your own voice.

EZVIZ offers both local and cloud storage. You’ll need to supply your own media for the first in the form of a microSD card (up to 256GB) or the EZVIZ NVR (network video recorder). For the second, you’ll need an EZVIZ CloudPlay subscription. The Standard offering costs $6 per month or $60 annually for a 7-day video history for one camera, or $11 per month or $110 annually for a 30-day history. There is also a pair of home plans for users with up to four EZVIZ cameras. The 7-day play is $9 per month/$90 per year and the $30-day plan is $16 a month/$160 per year. 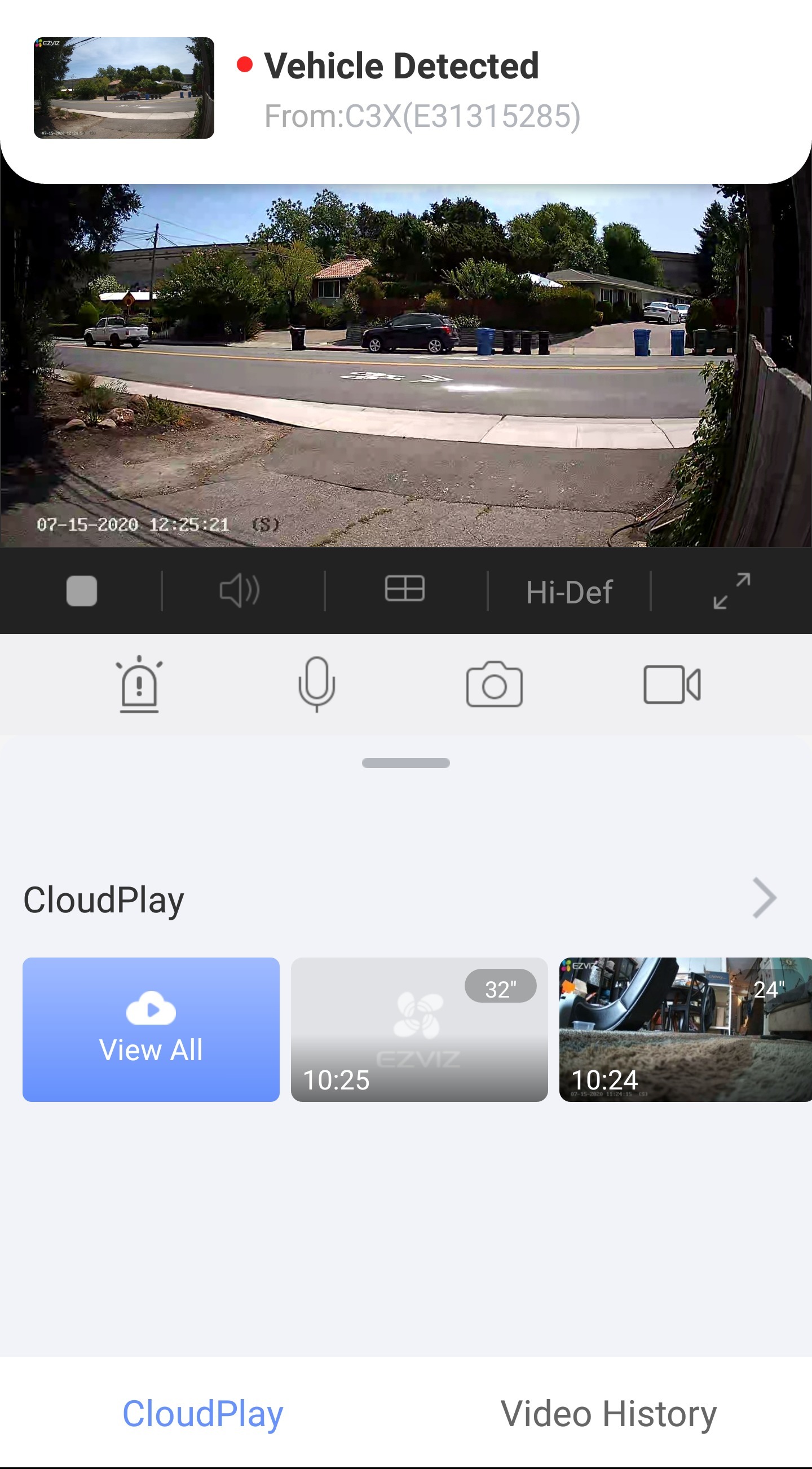 Setting up the C3X is very easy. I needed only to download the EZVIZ companion app and follow the on-screen prompts. The app recognized my camera as soon as I scanned its QR code, then found my Wi-Fi and had me log in. A voice prompt verified the successful connection.

Installing the camera is more complicated. Though the camera itself is weatherproof, the power cord is not, so even if you have access to an outdoor outlet, you’re probably still going to want to thread the power cord—and the ethernet cable, if you’re using it—through an opening into your home. That usually means drilling a hole through a wall. Depending on the distance from the camera to the indoor outlet, you might also need an extension for the 5-foot-ish power cord.

Once you have that sorted out, you just need to mount the camera. EZVIZ supplies the screws and anchors and a mounting template to make this easier.

When you launch the app, the home screen displays a screenshot of the C3X’s current field of view. Under this are buttons to access motion detection and notification settings and general camera settings. Above the screenshot, are buttons to activate “at home mode” and “leaving home mode,” which disable and enable alarm notifications respectively.

Tapping the screenshot opens the C3X’s live feed. Directly beneath the feed are buttons to stop the video stream, mute the speaker, change the resolution, and toggle to a split-screen view that supports up to four camera feeds. Under this are buttons to trigger the siren, activate two-way talk, and record video or take a screenshot of the feed. At the very bottom is a horizontal timeline of all the video clips stored online or to your local media.

The camera’s image quality is superb. In daytime mode, the picture is tack sharp with balanced lighting and accurate colors. Night vision, which uses a pair of infrared LEDs for illumination, is just as sharp. The colors don’t pop as they do in normal light, but they display well enough to identify easily, which can be crucial for forensic evidence. I was able to stream my feed to an Echo Show using voice commands when I didn’t have my phone handy. When detecting motion, the camera can identify human and vehicle shapes. You can select to be notified of one or the other or both in the detection settings. These were generally accurate in my testing. By default, you will receive detection notifications around the clock. You can change this by setting a notification schedule; you just choose a block of time during which you want to receive alerts then assign it to whichever days of the week you’d like.

You can manage alerts further by simply adjust in the sensitivity of the motion sensor or by setting motion detection areas. The latter method requires you to mask in areas on a grid over the camera’s field of view, after which you will only be alerted to movement within them.

While motion detection worked flawlessly, playing back the video clips they triggered did not. I had no trouble accessing video saved locally to microSD, but I couldn’t view any of the videos saved via my trial CloudPlay subscription. Every one of dozens of videos saved to the cloud failed to load and gave me a “Video playback failed” error message. I hoped a firmware update I received during testing would fix the problem, but there was no change.

On balance, the C3X is a good camera. It’s stocked with useful security features, almost all of which worked very well. The CloudPlay playback issue is frustrating though, especially considering the additional cost the subscription adds to the price of the camera. EZVIZ will undoubtedly remedy the issue at some point, I do suggest buying a microSD card and storing your video locally until it does.

The EZVIZ CX3 is a good outdoor camera with excellent security features, but the problems connecting to video stored on EZVIZ’s servers needs to be fixed ASAP.