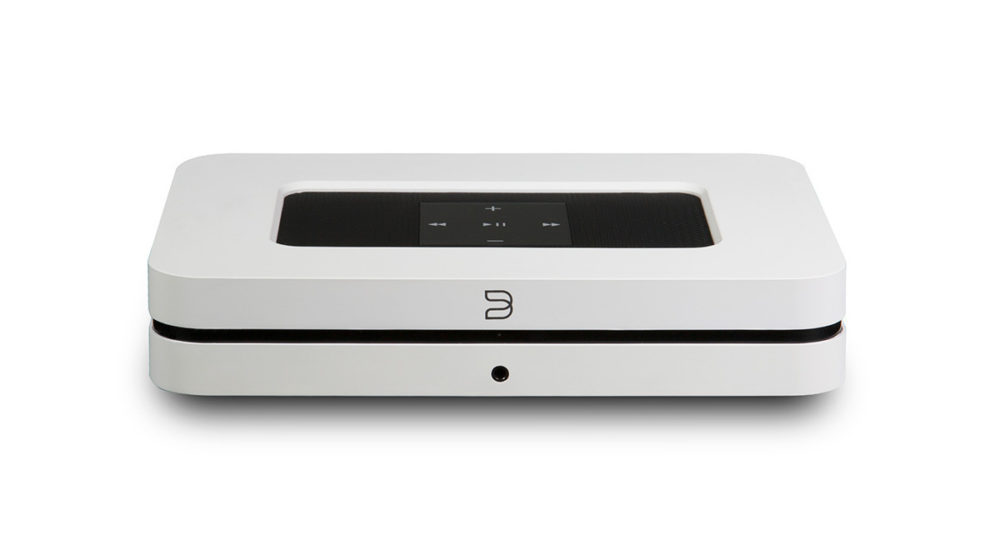 Bluesound Node 2i review: This high-fidelity music streamer sits at the top of its class

Audiophiles approach the Bluesound Node 2i with suspicion. As a compact music server with built-in DAC that dares to serve up the highest quality music-streaming services, this thing seems almost, you should pardon the expression, too cheap at $549 to perform all those tasks well. Serious digital-to-analog convertors alone can cost that much—or a whole lot more.

But pinch me, the Node 2i is the real deal, and the best of the “affordable” high-fidelity internet music streamers I’ve tested in recent months. Laying out an airy, open soundstage (never cluttered or compressed), reveling in precision and finesse, music flows from this small package in a most graceful, personable fashion. And that well-rounded aura persists, no matter what your stylistic taste, from AC/DC to Jay Z, Ambient to Zouk, Albeniz to Zappa. This is a player that can climb every musical mountain and ford any stream you send its way. 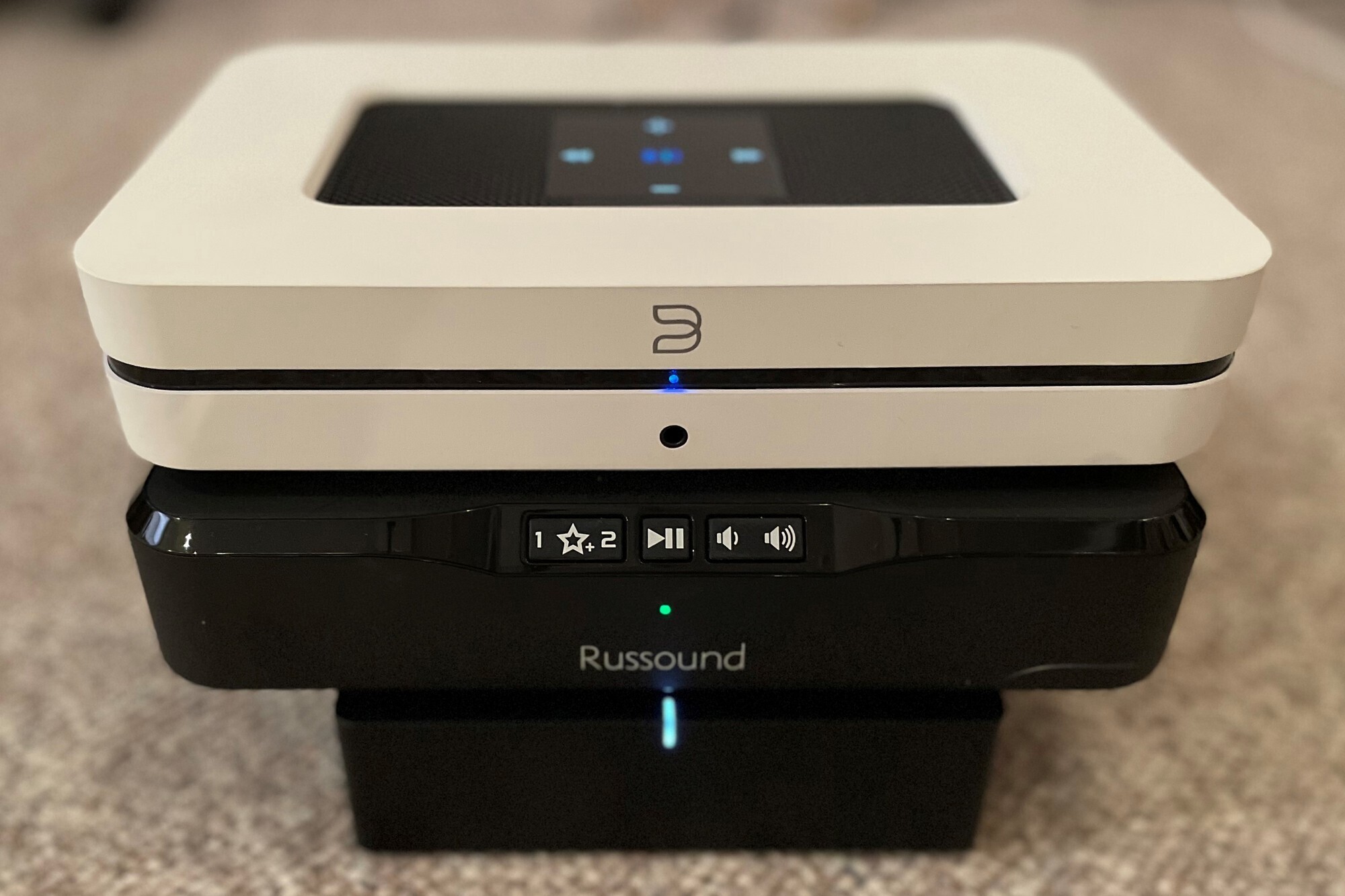 For sure, a Node 2i is especially responsive when you feed it the really good stuff. Say, by landing on a meticulously engineered, higher-bit-rate internet radio station that obsesses over every link in the chain. Or by splurging a few bonus bucks per month for the highest grade of 24-bit/96kHz (or occasionally even 192kHz) content streaming from a Qobuz, Tidal, or Amazon Music account. The highest-resolution files pumping through this music machine really could pass for studio masters, and one source (Tidal) has labeled them thusly. The new Sonos Radio HD is another candidate, although it tops out at 16-bit FLAC.

How far we’ve come. Remember when sound purists argued that digital encodes were so chopped up and connect-the-dots fatiguing that listening could literally make you weak in the knees? Now I’d argue these high- (and ultra-high) resolution streams can give both you and your sound rig a new lease on life.

The Node 2i is a very close relation to the self-powered (60-watts per side) Bluesound PowerNode 2i that I reviewed in September with similar delight. But as a self-contained, just-add-speakers-and-serve product, the Powernode 2i left me with some questions unresolved. Did I really hear all that much improvement over Sonos media players I’ve run with the same speakers? I couldn’t make a direct A/B comparison because I didn’t have a Sonos Amp on hand. I also wondered what sonic advancements Bluesound’s well-tuned chassis and chipset—including a 1GHz Arm Cortex A9 processor and a 32-bit/192kHz DAC—might deliver if I could pump up the amp power and load-bearing speakers, and then take this thing out on the high-tech streaming highway and really let ‘er rip 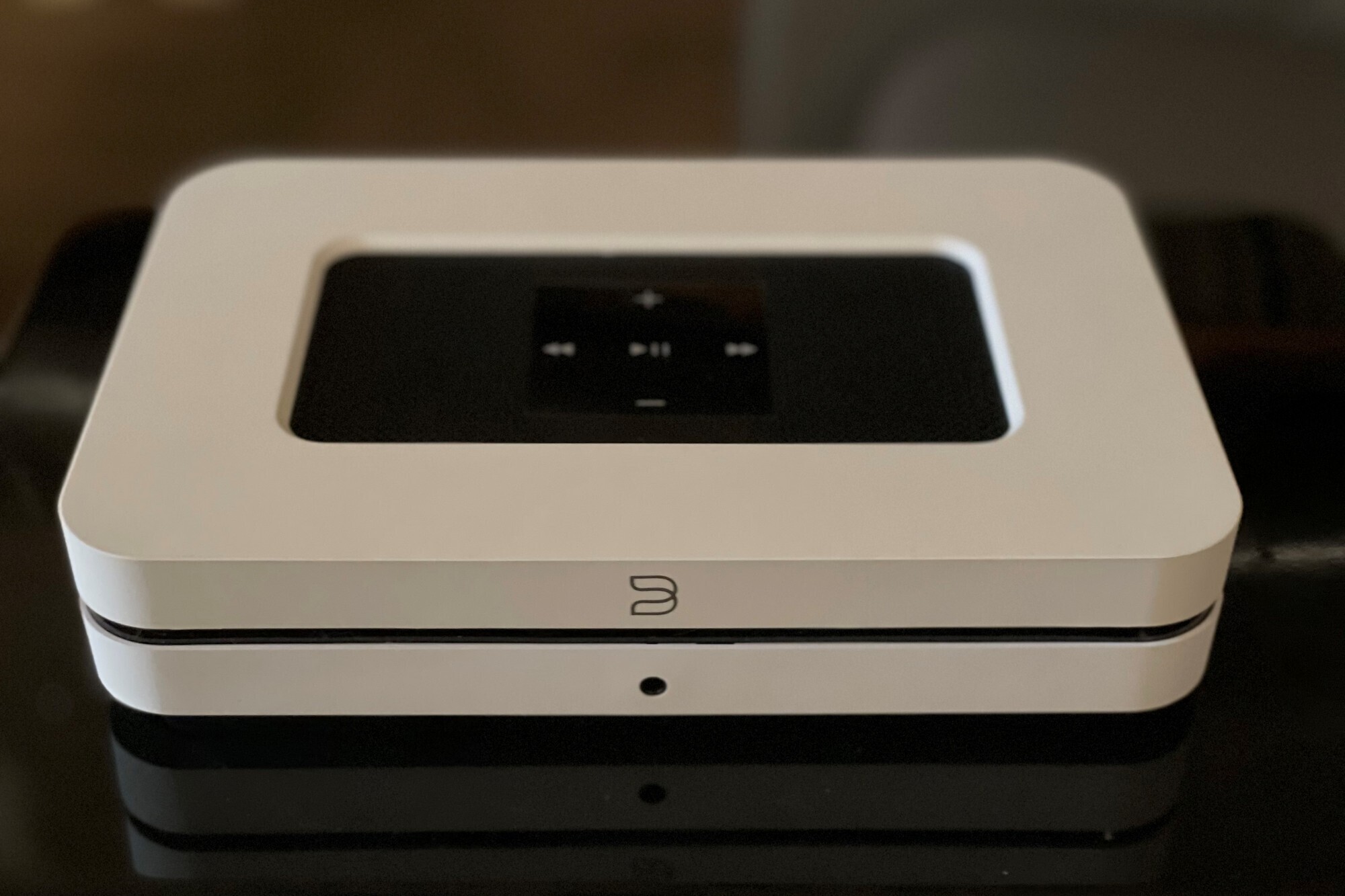 The Node 2i lets me do just that, with nary a disappointment. This isn’t just another component that brings new content (streaming) to your gear. It’s a game changer, the best argument I’ve found to date to sell my crazy-big vinyl and CD collection, ‘cause almost all that content on the walls is hiding in this little box’s connection to the internet.

To uncork the sonic genie, I plugged a Node 2i into my 150-watt-per-channel Yamaha Aventage RX-A3060 receiver mated with Bowers &Wilkins’ Nautilus 803 floor-standing speakers. I then started feeding it high-resolution material—artists and outlets that I hoped would do my ears good. Like singer/songwriter Sara Bareilles, going for the sonic gusto with her new More Love set, snap-happy country cousin Lee Brice (Hey World) and Cat Stevens (remember him?) daring to reshape history with a re-arranged 50th anniversary remake of Tea for the Tillerman. All recording pros with (good) ears, attuned to finessed production and engineering efforts.

Not simply trusting first impressions, it seemed wise to do some serious comparing and contrasting. Thanks to my receiver’s multitude of inputs and reasonably responsive remote control, I was soon plugging in and switching between the Bluesound Node 2i and the two other internet streamers I’ve recently reviewed here. One being the high profile Sonos Port ($449), which left me with a lukewarm feeling, and then the Russound MBX-PRE ($399), a dark-horse candidate that bested the Sonos in articulation, openness of presentation, and all-round emotional pleasance, though not on operating convenience and sheer volume of source options. (Honestly, will anyone ever surpass Sonos on those traits?) 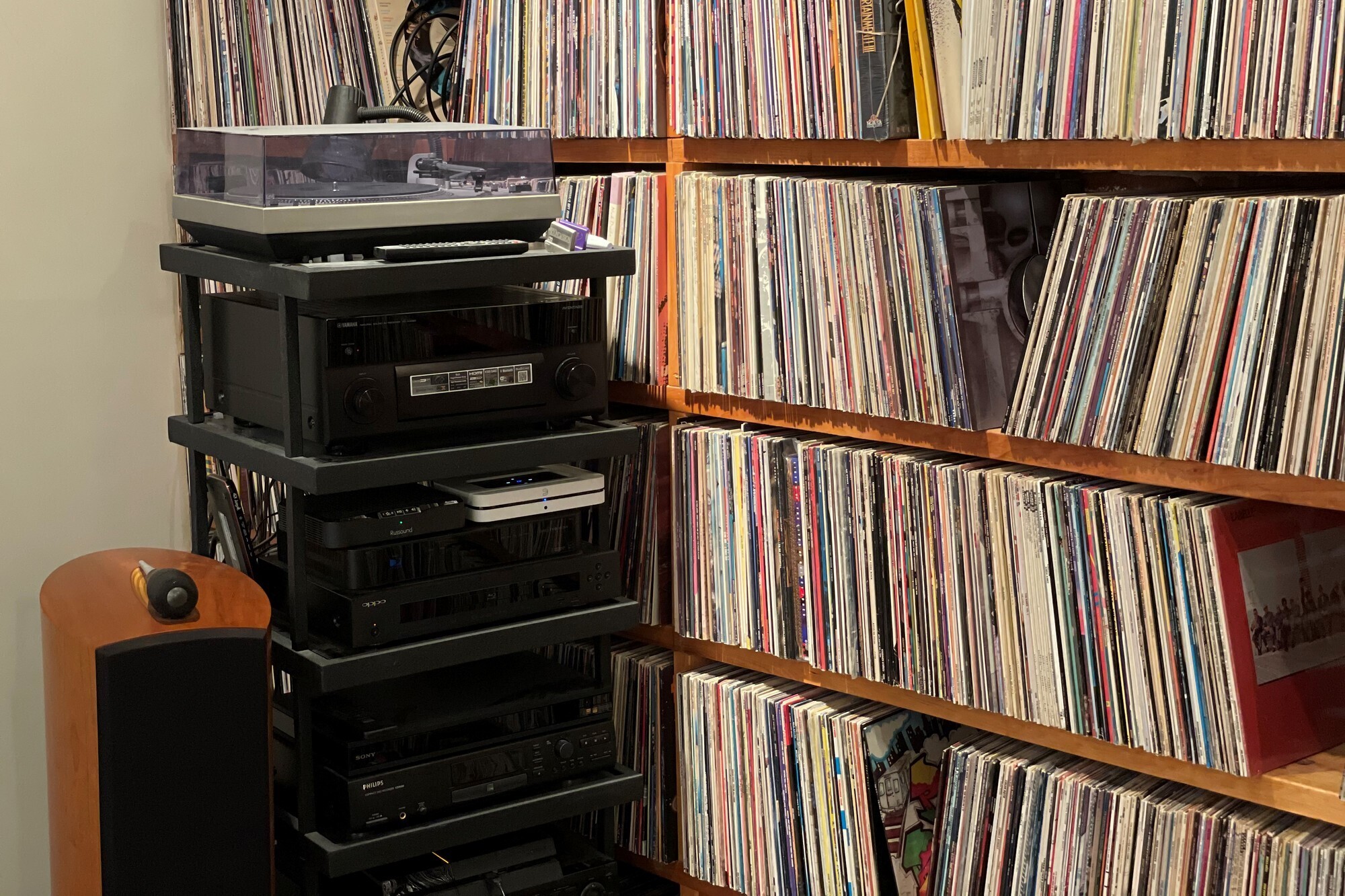 I’m now passing the “sounds best” crown to the Bluesound Node 2i in this three-horse race. With reasonably challenging internet radio material that was easy to sync up—the 320Kbps MP3-streaming Linn Jazz channel tapped on TuneIn—the Bluesound Node 2i and Russound MBX-PRE were neck-and-neck for the lead, with Sonos trailing by a length-and-a-half. If you haven’t heard of it, Linn Jazz is a spin-off of a noted UK audio products maker and record label, showcasing their own audiophile-grade, small ensemble acoustic recordings with artists like guitar master Martin Taylor and the sophisticated cabaret vocalists Barb Jungr and Joe Stilgoe. Constantly putting playback gear to the test, the Bluesound and Russound streamers both showed superior organizational and articulation powers. And they shined especially bright with fast transient challenges—plucked guitar and bass lines, sustained piano chords, splashy/ringing cymbals, and rattling tom-toms.

Don’t get me wrong. When consumed on its own, Sonos renderings of the same material are certainly pleasing. I’m happy as a clam in mud listening to Sonos speakers in my bedroom, bathroom, and kitchen. But when doing seriously focused (okay, obsessive) listening comparisons on my best rig, I was struck anew by the deeper soundstage and sharper focus; by the more dynamic, informative, and thus entertaining interplay afforded on the Russound MBX-PRE and even more so on the Node 2i. (FYI: all three boxes were connected to the Yamaha via variable-level analog outputs using identical audiophile-grade cables to allow for proper volume matching and to patronize the devices’ own DACs.)

Where the Node 2i (and its amplified sister, the Powernode 2i) clearly take the lead is their support for high-resolution music subscription services. Bluesound gear and the BluOS operating system support the highest grade of service available from Qobuz (my personal fave because it courts grown-up artists, styles, and listeners) and from Amazon Music HD. Both Bluesound boxes deliver high-res lossless FLAC encoding at up to 24-bit resolution and sampling rates as high as 192kHz (meaning bit rates up to 3,730Kbps). Why Russound doesn’t offer the same is a mystery, as its DAC can handle 24/192 streams. Bluesound also stands alone in supporting Tidal’s Masters tracks, albums encoded with MQA audio technology to deliver the quality of the original studio recordings.

While the brand-new Sonos new S2 platform can theoretically jump higher, Sonos remains content serving Qobuz, Tidal, Amazon Music, and its aforementioned Sonos Radio HD service at 16-bit/44.1 Hz FLAC (or less.) Like Russound, Sonos is betting that most listeners are satisfied with that quality. And really, who’s to argue, given the number of subscribers paying Spotify for its 320Kbps streams (and the millions more listening to the free 96- and 160Kbps ad-supported streams on that service).

Throw it what you will

Besides those internet sources, the Bluesound Node 2i stands ready to pull music off your thumb drives, NAS box, or anywhere else you might store your private collection (using gigabit ethernet, Wi-Fi 5, or Bluetooth 5.0—with support for aptX HD. AirPlay 2 support is onboard, too.) The device supports the high-res formats FLAC, ALAC, WAV, AIFF, and MQA as well as MP3, AAC, and WMA.

With both a Node2i and a Powernode 2i now under my roof, I’ve been happily grouping the two devices to output the same music stream with perfectly synchronized results. Throwing Airplay 2 signals to both Bluesounds (via my Wi-Fi network) has been a hit or miss thing, though, with the Node 2i sometimes dropping out for a second or three while the Powernode 2i soldiers on. (I can’t blame the iOS platform messenger, a brand-new iPhone 12 Pro.) 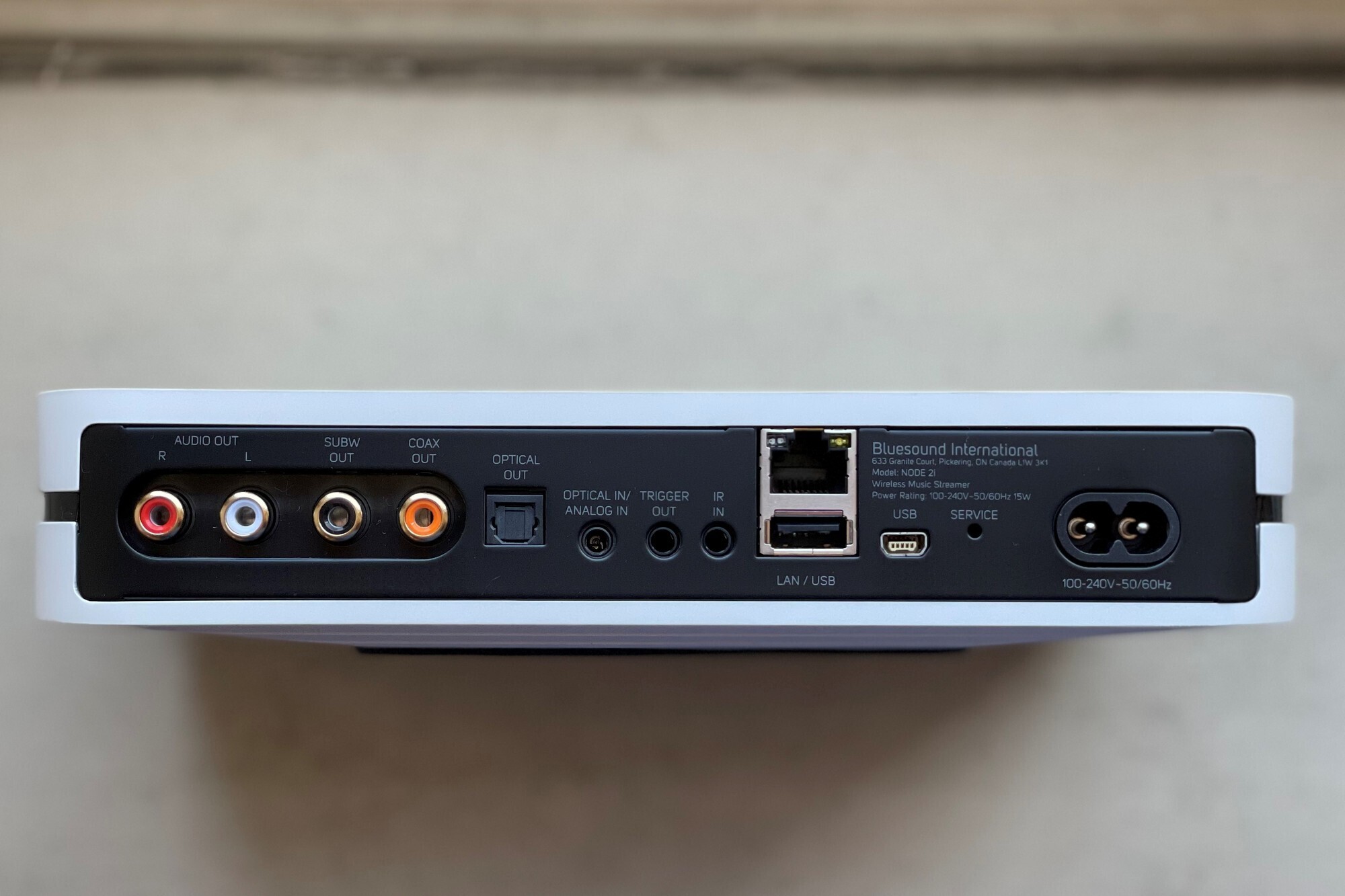 Both the Node 2i and the Powernode 2i offer similarly sleek styling, with top-mounted controls and a 3.5mm headphone jack conveniently located in front. The Node 2i doesn’t match the Powernode 2i in terms of HDMI support, but you will find a gigabit ethernet port, a USB-A port for a thumb drive, an IR input, and a 12-volt trigger output. There’s also a goodly array of audio inputs and outputs: A combo 3.5mm Toslink (optical) digital/analog stereo input, an RCA subwoofer out, and Toslink (optical) and coaxial digital outputs—convenient if you wish to use a higher-end outboard DAC. Remember, however, that you might lose MQA support if that outboard DAC doesn’t support it.

If the Node 2i fits your budget, and you have an amplifier and a pair of speakers you’d be happy to pair with it, this networked media streamer will reward you greatly with fantastic sound.

With high-quality sound and services, the Bluesound Node 2i brings 21st-century features and renewed vitality to your sound system at a rational price.