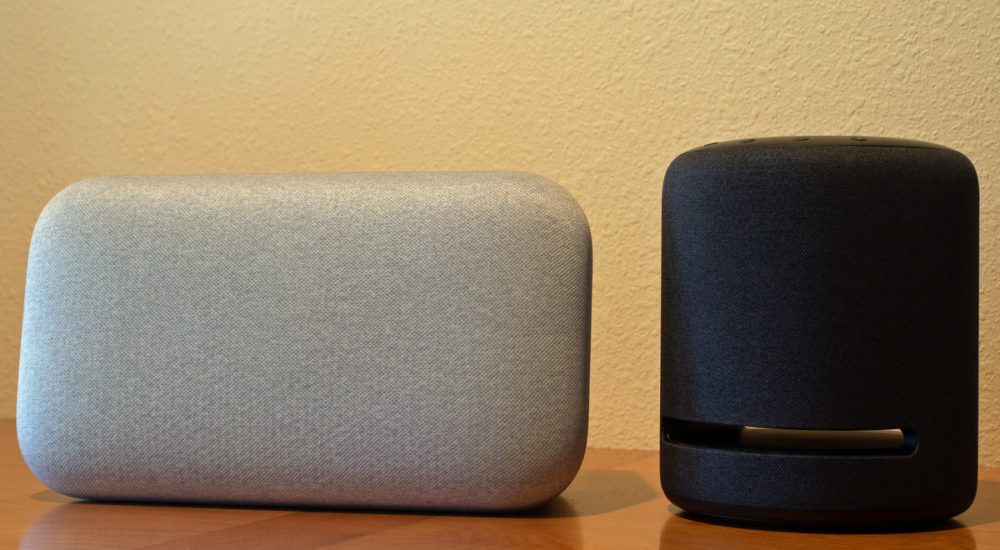 So, you’ve narrowed your smart speaker choices down to the top two high-end models: the Google Home Max that came to market in late 2017, and the Amazon Echo Studio that came two years later. You have good taste, my friend. These are both very fine speakers even if they don’t compete with high-fidelity dumb loudspeakers from the likes of Bowers & Wilkins, Naim, or Bang & Olufsen.

Comparing the Google Home Max and Amazon Echo Studio on seven counts reveals some important differences, and one important similarity, that should help you make up your mind.

Even if your sole reason for buying a smart speaker is to control your smart home, you’re still buying a speaker. You’ll still care what your digital assistant of choice sounds like when it responds to your commands and queries even if you never intend to play music on that speaker. That might matter less with an entry-level smart speaker, but when you’re shopping at this level, a smart speaker’s musicality is its most important attribute. 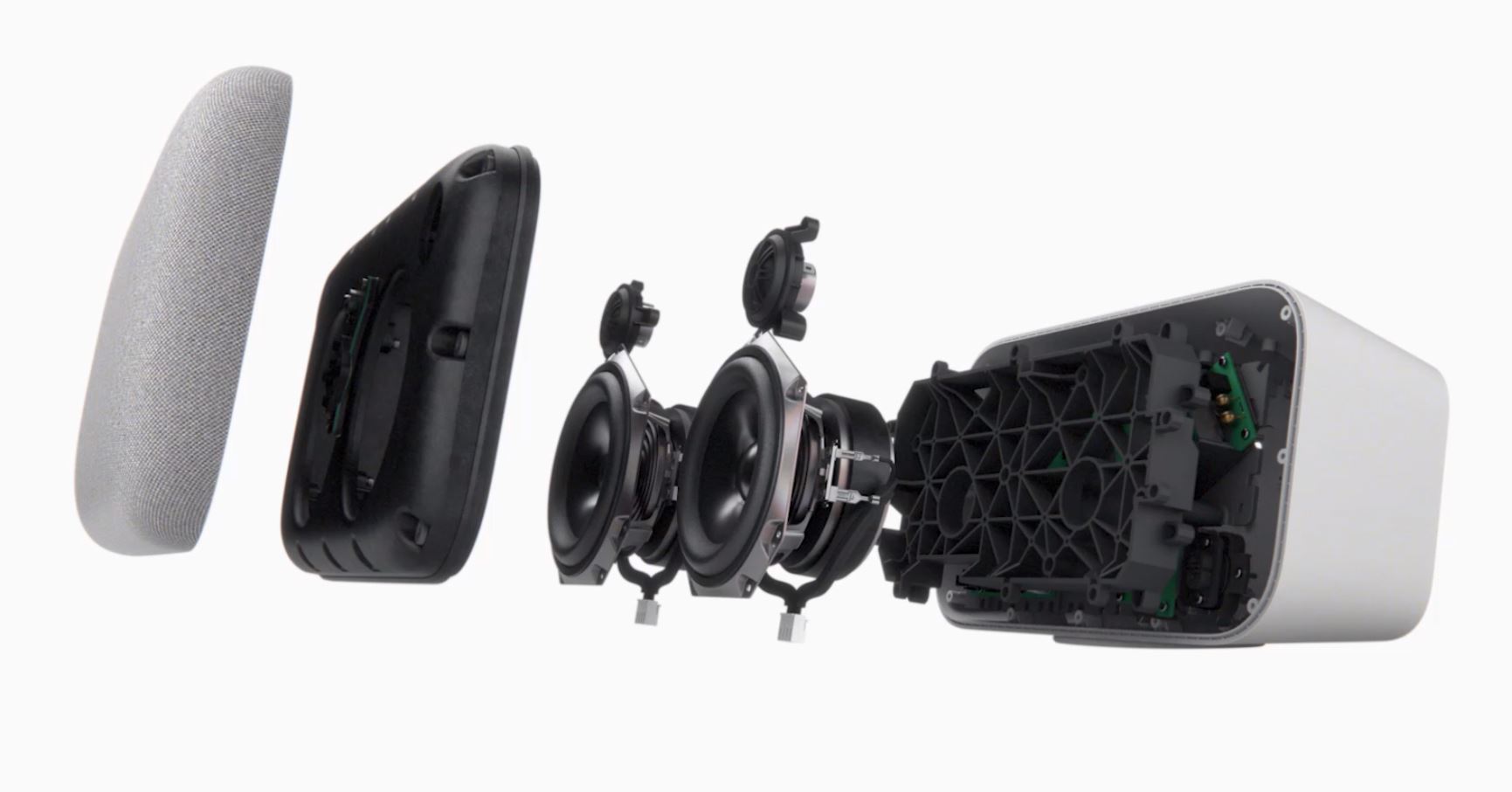 And on this score, the Google Home Max is better than any smart speaker on the market. While I wouldn’t classify it as an audiophile product, its dual 4.5-inch high-excursion woofers and two 0.7-inch dome tweeters driven by six Class D amplifiers deliver exciting audio performances with all types of music.

The Amazon Echo Studio comes in a very close second on this score, however, and that’s saying a lot. While its single 5.25-inch woofer is smaller, it delivers only very slightly less bass response. The construction of its enclosure, on the other hand, does little to prevent vibrations from the speaker from being transferred to whatever surface the speaker is resting on, coloring its sound in the process. 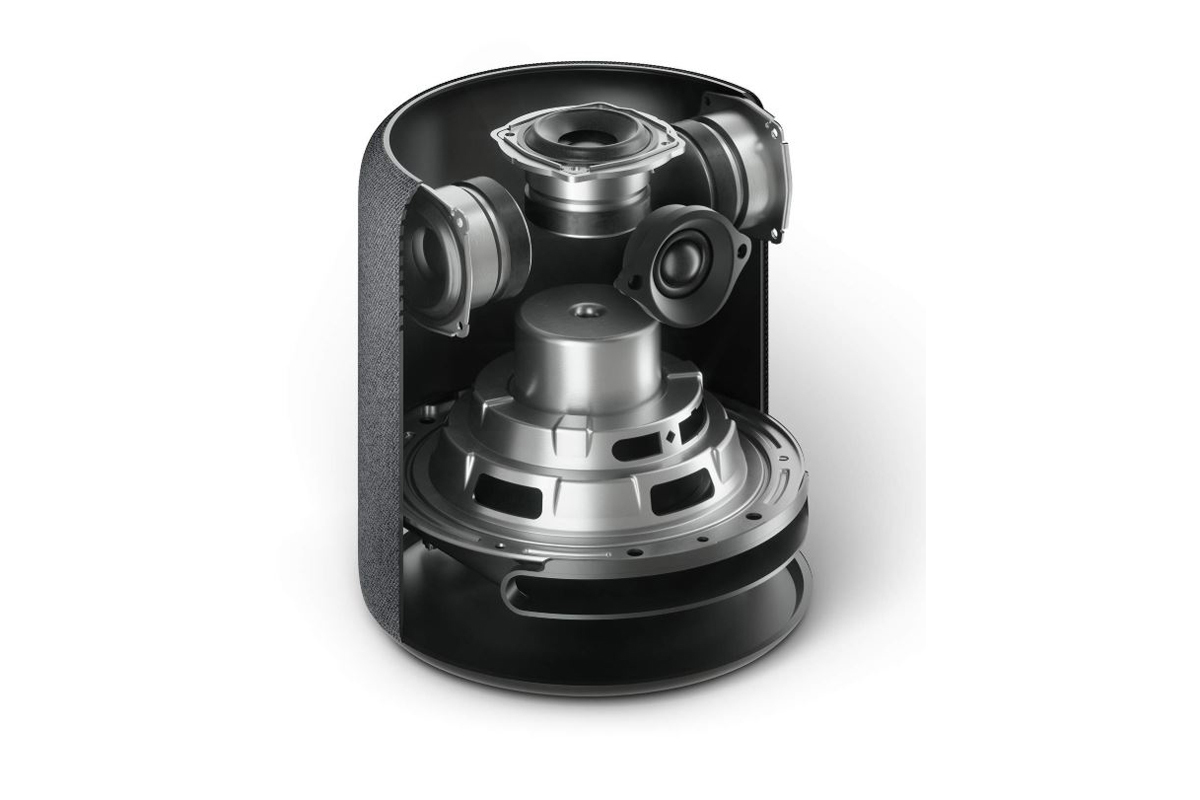 Amazon is also unique in its support for 3D audio, via Sony’s 360 Reality Audio and Dolby Atmos. But you’ll need to pony up for a subscription to Amazon Music HD to get it. TechHive contributor and home audio expert Scott Wilkinson has great things to say about Sony’s new format played on headphones, but I was less impressed with it as rendered on the Echo Studio.

Both smart speakers can be paired with a matching second speaker for stereo performance, and both can be nodes in a multi-room audio system. But only Amazon offers the option of adding a wireless subwoofer for deep bass reproduction.

But fidelity is more important than thump and sonic tomfoolery in my book, so the Google Home Max wins this round.

The primary reason anyone buys a high-end smart speaker is to listen to music. And if you’re listening to music on a high-end speaker, you’re likely going to play it loud. The conundrum is that the microphones on the speaker need to be able to hear you say the wake word even while the speaker is blasting your favorite tunes. On this score, I found the mics on the Google Home Max to be more capable of hearing me say (or shout, to be fair) “Hey, Google” while the speaker was pumping music at full volume than the Echo Studio was at hearing me yell “Alexa” while similarly cranked. 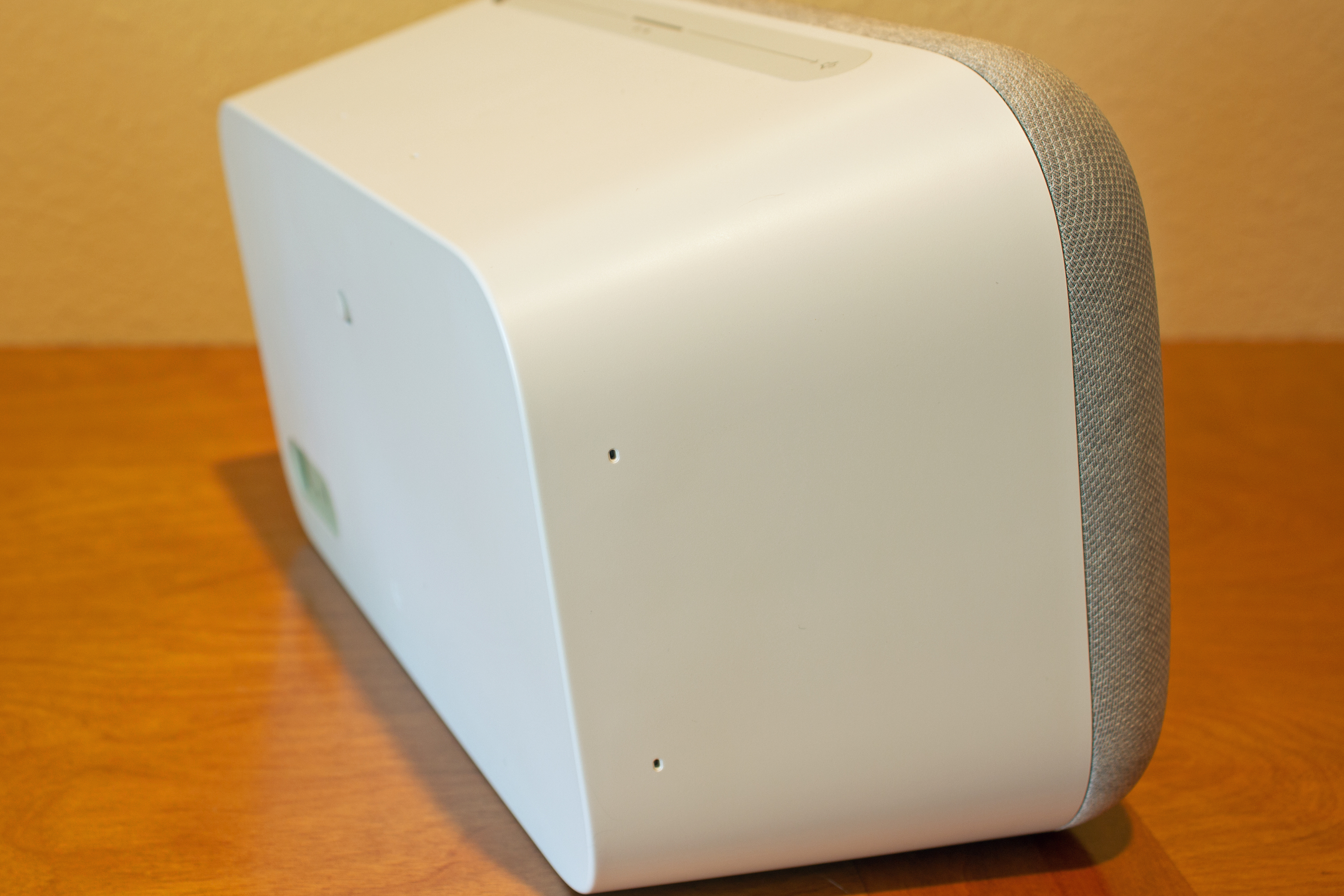 At the other end of the spectrum, there are times when you most certainly don’t want to raise your voice when asking your smart speaker to do something for you—when you’re in bed with your partner who you don’t want to disturb. Amazon’s Alexa has a “whisper” mode that lets you speak very softly to an Echo and Alexa will respond in kind. Google Assistant’s Night Mode will reduce its volume, emit a tone instead of a vocal response, and limit the brightness of its LED indicators; but this only works at defined times on specified days.

In other respects, both speakers have excellent voice recognition. You’ll need to decide which of the two advantages described above is more important to you, but I’m calling this one a tie.

Don’t underestimate the importance of buttons. Yes, you’ll use your voice to control a smart speaker 95 percent of the time, but there’s nothing better than the sensation of touch—at least when you’re near the speaker. 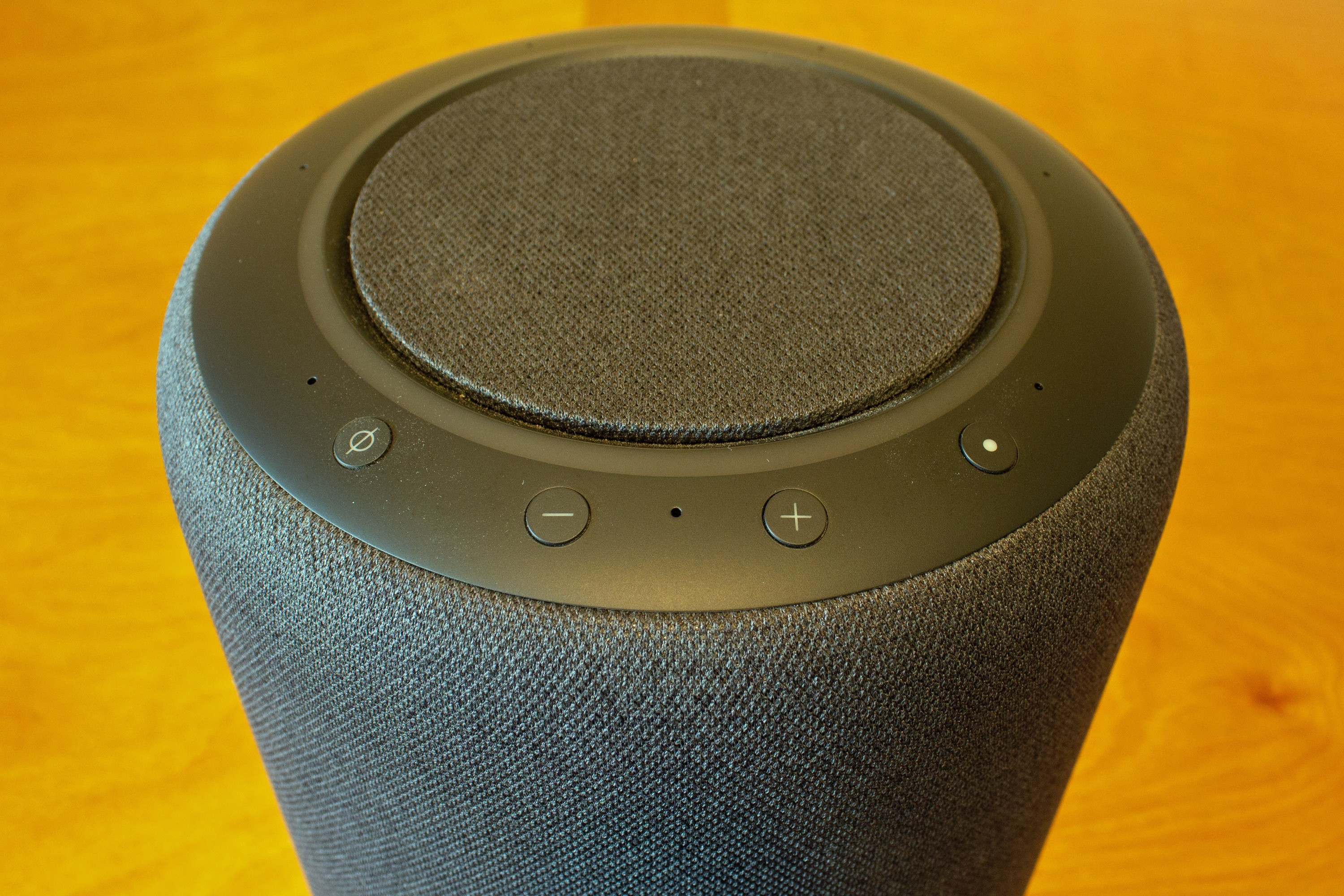 The Amazon Echo Studio and Google Home Max both have physical controls, but the Echo Studio’s distinct buttons for volume control are superior to the touch-sensitive slider on the Google Home Max. Pushing buttons delivers reassuring tactile feedback that non-haptic touch-sensitive controls can’t match. I’d like old-fashioned rotating knobs even more, although they might not be as aesthetically pleasing.

Neither Amazon nor Google are in the vanguard of personal privacy protection. There’s no shortage of horror stories about privacy breaches from both: Amazon admitted that human error led to one Echo user gaining access to more than 1,000 voice recordings made by another Echo user. And Google admitted last year that it had been using paid contractors to listen to audio clips recorded by Google Assistant, including user names, addresses, and other personal information. 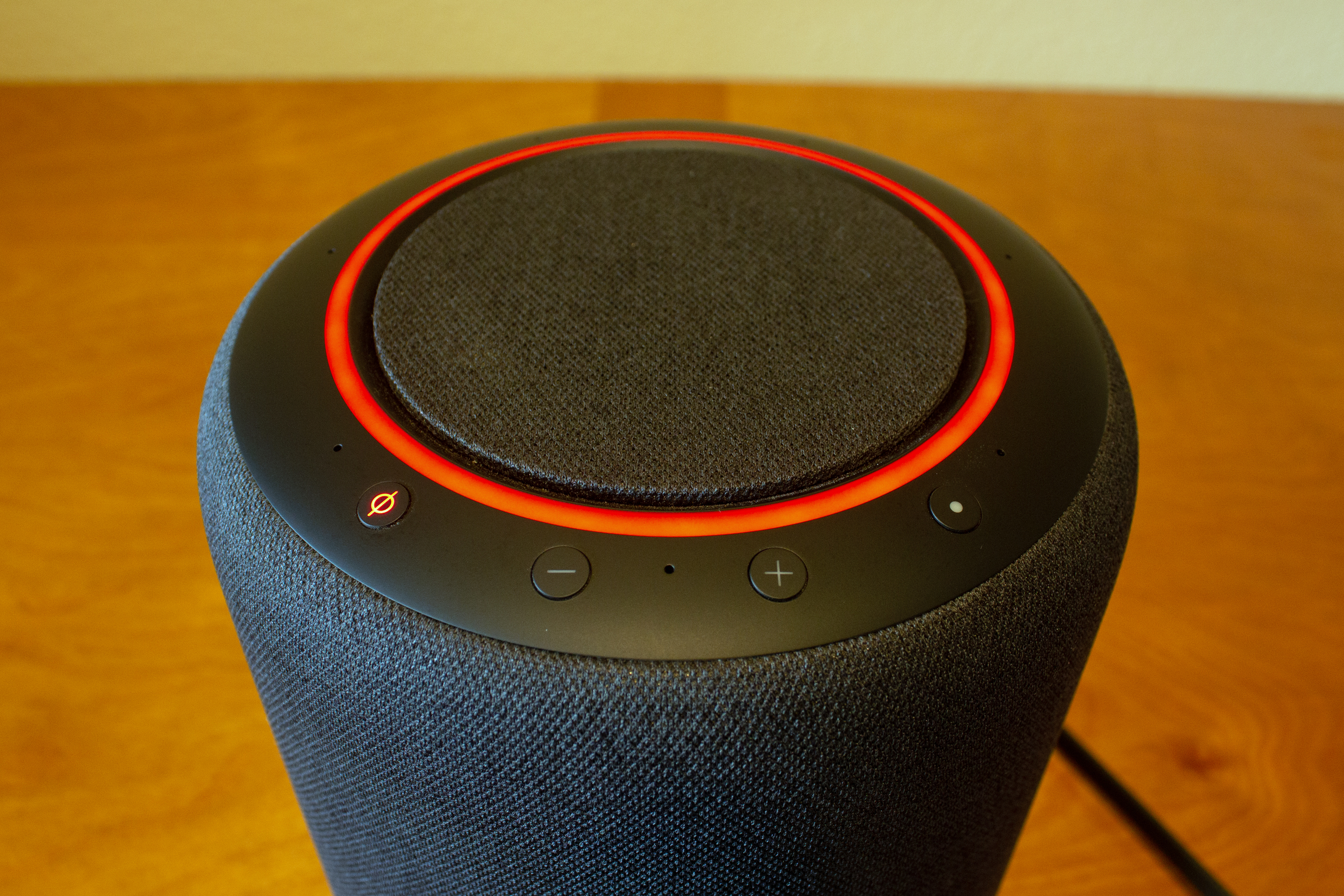 While each company has made strides to improve its performance on this front, there’s no question that putting a smart speaker in your home opens your personal space to a third party.

Both speakers allow you to mute their microphones, but this step is easier to perform on the Echo Studio than it is on the Google Home Max, and Amazon’s speaker provides the better visual cue that its mics are turned off. To mute the Echo Studio’s mic, you merely need to tap the button on the left-hand top of the speaker. When you do, the LED light ring encircling the tweeter turns a deep red.

To mute the mics on the Google Home Max, you’ll need to reach around and slide a switch on the back of the speaker. This is not only less convenient, but the speaker’s visual feedback—four static orange dots displayed beneath its cloth grill—is a much less obvious cue that the speaker isn’t listening to you. So, the Amazon Echo Studio wins this round—however barely.

Google is working hard to close the gap on this score, but Amazon maintains a very slight lead in terms of support from third-party smart home device manufacturers. Most ship new products with support for both digital assistants, but none—barring the Google-owned Nest, perhaps—ship without supporting at least Alexa.

It also just feels more natural to say “Alexa, turn on the light” than to say “Hey, Google. Turn on the light.” Alexa has a personality, where Google Assistant never feels like much more than a cold-hearted robot. That last assessment might be something of a personal bias for me—you might feel differently. Google Assistant runs away with the next category, but Alexa wins this round.

There’s no contest on this round. Google Assistant’s hooks into the Google search engine imbue it with a tremendous advantage when you’re looking for general information versus needing to play music, turn on a light, lock your door, arm your security system, or get similar tasks done in your smart home.

The two platforms are on an even keel only when you ask very simple questions, for example: How many ounces are in a cup? But in most other respects, even where you’d expect Alexa to have a leg up—answering questions about who starred in or directed a movie, for instance, since Amazon owns IMDb—a Google Home smart speaker beats an Amazon Echo every time. 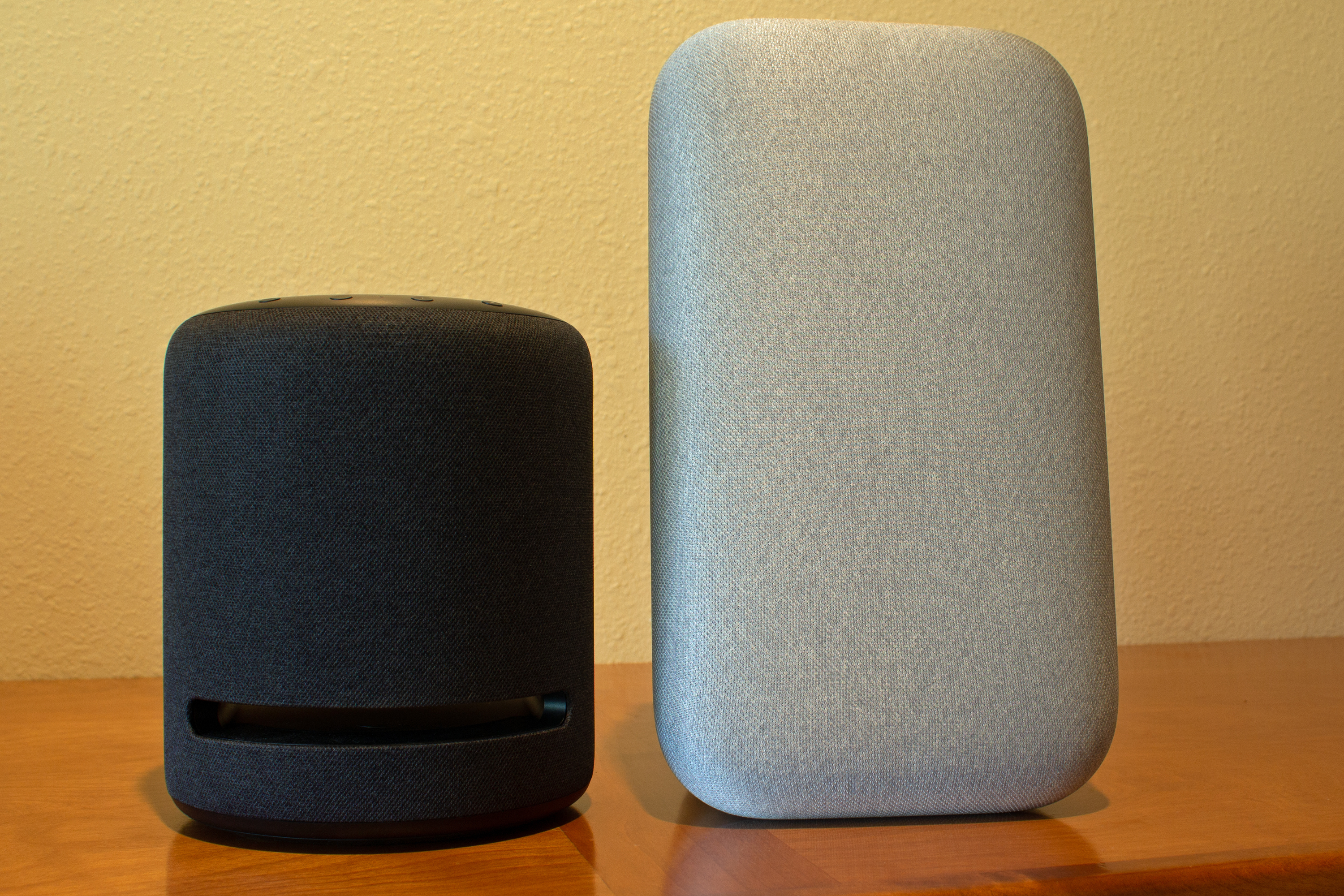 I’m putting greater weight on this comparison’s first round, musical performance, to declare the Google Home Max a superior smart speaker over the Amazon Echo Studio.

Yes, Google’s speaker won only two of the seven rounds and tied Amazon’s high-end speaker in a third. So, yeah, I’m putting my thumb on the scale. But if you don’t care about a smart speaker’s audio fidelity, there’s really no reason to spend several hundred dollars to buy one—pick up an entry-level Nest Home Mini or Amazon Echo Dot, instead.