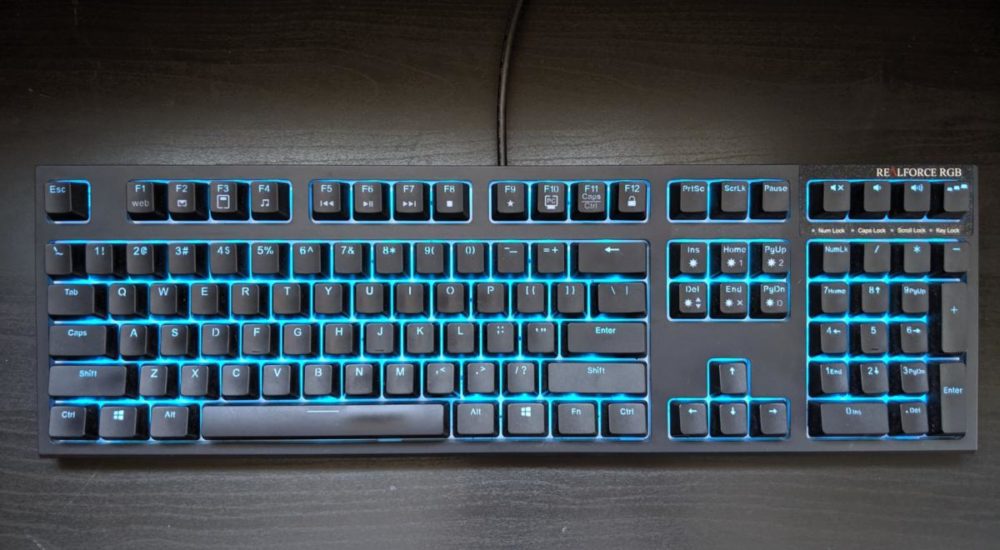 Topre Realforce RGB gaming keyboard review: Even for Topre fans this is a tough call

Topre switches. You either love them or…well, you’ve probably never tried them, because they’re prohibitively expensive to all but the most enthusiastic of keyboard enthusiasts. Case in point: The Realforce RGB, Topre’s attempt at a modern RGB gaming keyboard, yours for the low, low price—and this is the point where you swig some water—of $299.

Okay, now that you’ve wiped the spit-take from your monitor, let’s dig in.

Note: This review is part of our best gaming keyboards roundup. Go there for details about competing products and how we tested them.

The Realforce RGB certainly doesn’t look like a $300 keyboard—and maybe that’s following in a long tradition of high-end, function-over-form, “we’re so good we don’t need to impress you” hardware. You know, like Klipsch speakers and that garbage can Mac Pro. The Realforce RGB looks like the keyboard you’d find covered in dust at a garage sale, ‘90s tech startup logo and all. The F1 key even has a secondary command that just says “web.” 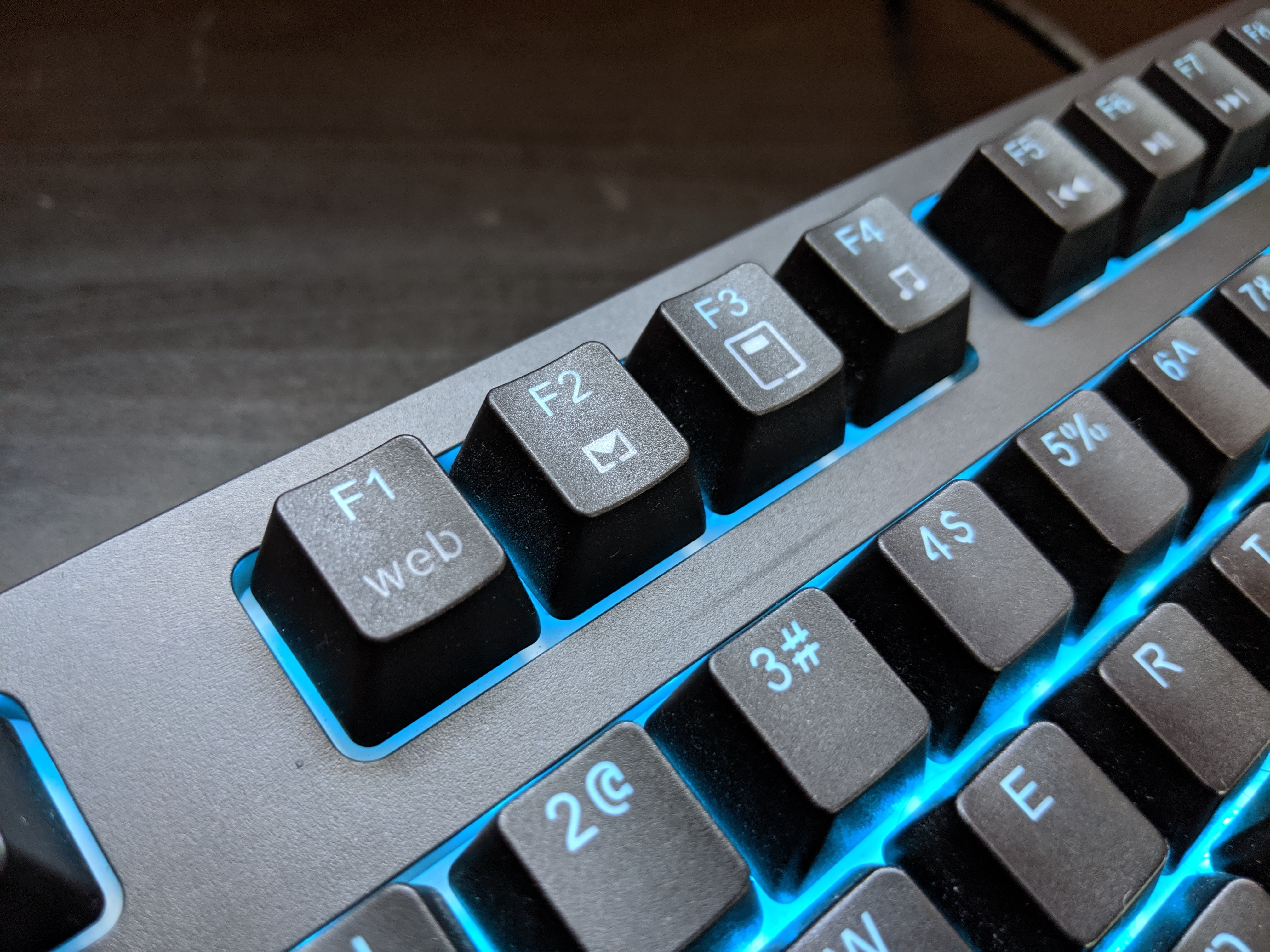 It’s aggressively uncool, as close as you could come to the Google Image results for “keyboard.” And I’ll admit that after years of flashy gaming keyboards the Realforce RGB is almost a relief to pound away on. This is hardware that says “I’m for work first, play later,” or the keyboard version of a mullet. It’s heavy. It’s black. It’s boxy. It’s indistinguishable at a glance from your average $20 rubber dome keyboard, except for a patch of glittery plastic in the top right, like at the last second a designer had a crisis of conscience and said, “we have to do something unique.”

So okay, you’re not paying for the Realforce RGB’s looks. Why are you paying for it? What could convince someone to spend $300 on a gaming keyboard?

And Topre is—at least if you’re a very specific kind of nerd—the answer.

Here’s the part where I mention that for a Topre keyboard, $300 actually isn’t that bad. You can easily spend more on less. The Happy Hacking Keyboard, for instance, has probably half the keys and no backlight, let alone RGB lighting, and is a programmer favorite. 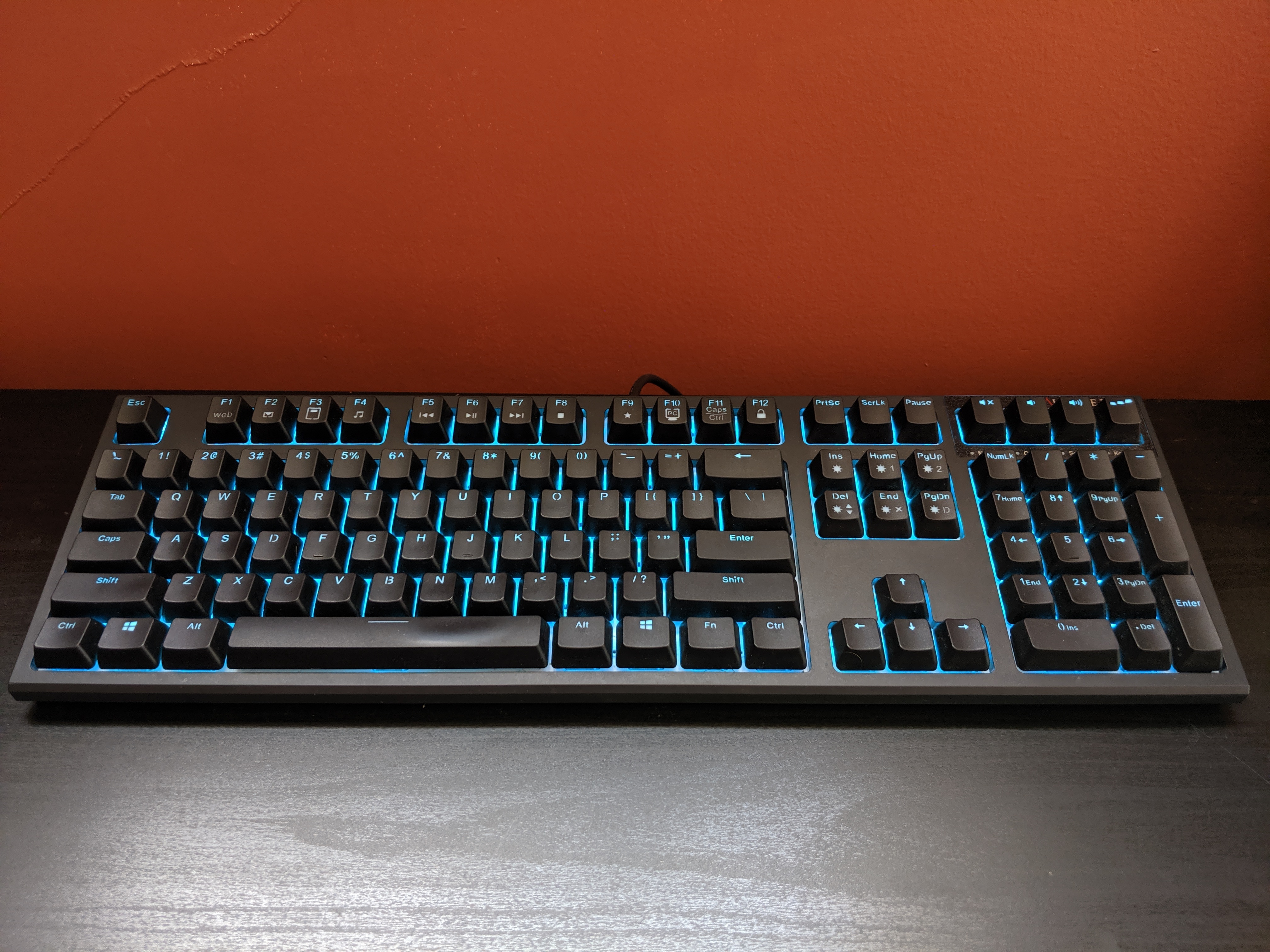 For the uninitiated, Topre is a sort-of hybrid switch, one that’s long invited debate. I’m not going to wade too deep into that void, but: The primary mechanism for a Topre’s key resistance is a rubber dome, the oft-maligned foundation of most budget membrane keyboards. The activation and feel, though, are similar to a mechanical keyboard’s, and the result is a unique switch that diehard fans swear by.

Me? I like Topre switches fine, though I’m always hard-pressed to justify the cost. They’re smooth and reassuringly clunky, with a nice thock when you bottom out the key. It’s a great typing experience, though admittedly an odd choice for games.

Topre does have one trick up its sleeves here: Adjustable actuation. Actuation is the point where a keystroke is recognized by the computer. A short actuation is faster and thus better for games, while a longer or deeper actuation is less prone to errors while typing. Theoretically, at least. 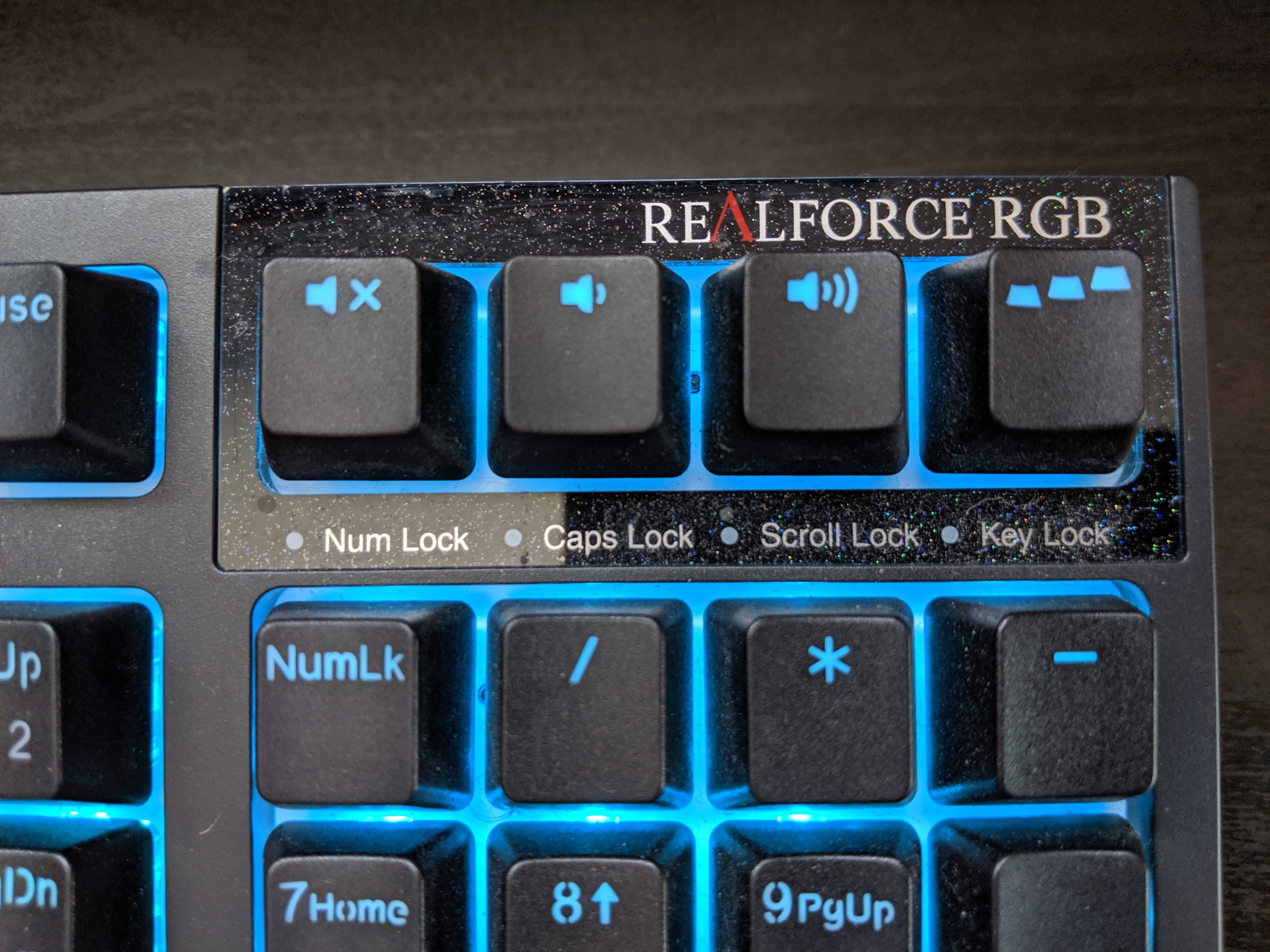 In reality, these are differences of a few millimeters and milliseconds. And the resistance profile of Topre switches—stiff up front, then a rapid collapse—makes the difference between a 1.5mm and 3.0mm actuation even less important. You’re unlikely to avoid bottoming out the switches regardless, especially with a relatively lightweight resistance of 45 grams, same as Cherry MX Reds.

Let’s call a gimmick a gimmick then and move on. Really, you’re buying the Realforce RGB because you love Topre switches or at least have an interest in high-end hardware.

To that end, it’s worth noting some of the Realforce RGB’s shortcomings.

On the plus side, this is one of the few Topre keyboards to integrate a Cherry MX style “stem” design. As a result it’s compatible with any custom keycap sets you might own, if indeed you own any. If not, it’s pretty easy to find Cherry MX-compatible keycaps. It’s an additional expense, and you might lose your backlight, but at least you’d inject a bit of personality into the Realforce RGB in the process. 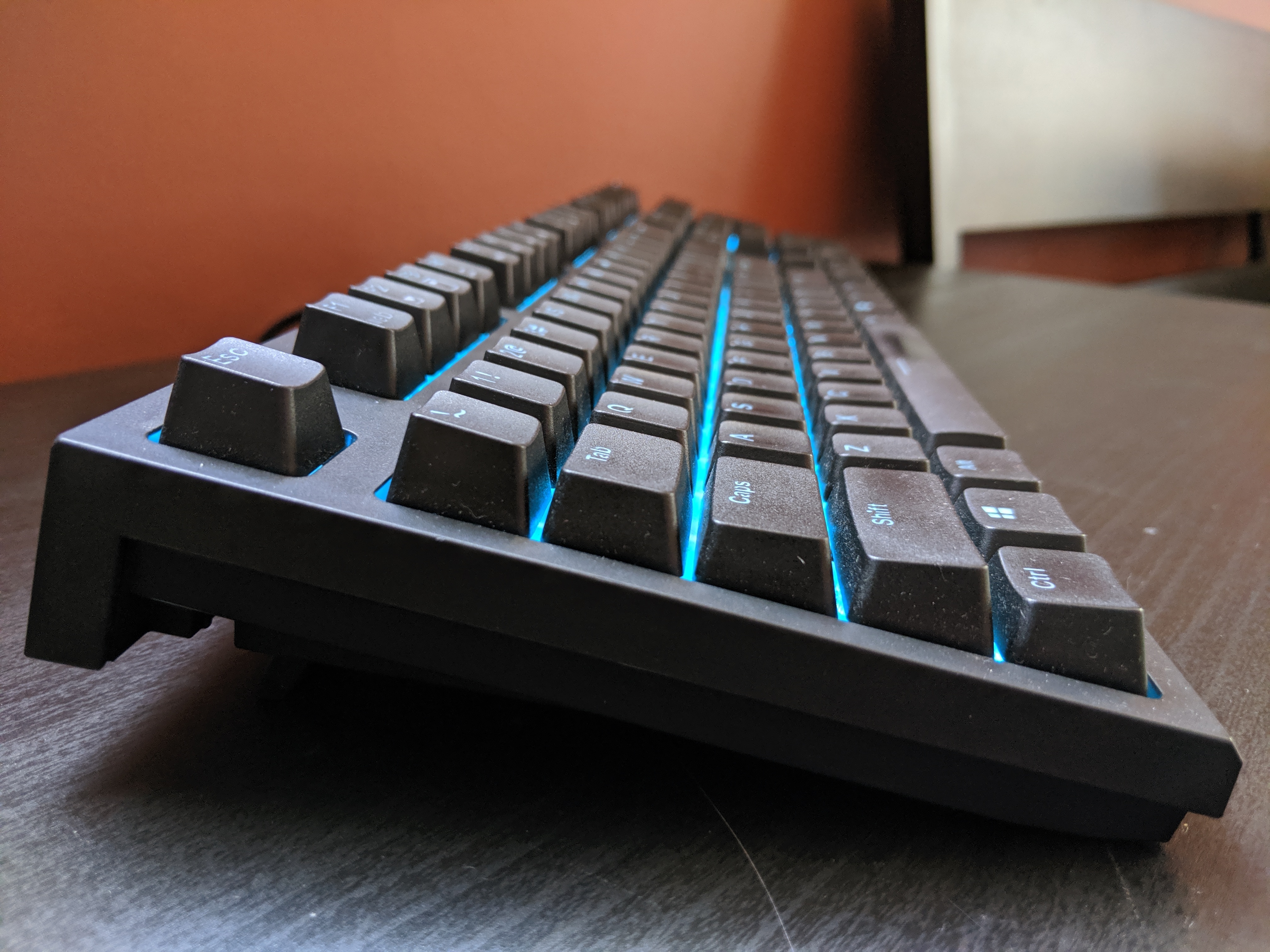 And honestly the backlighting is mediocre anyway. It works as advertised, but looks fairly dull even at full brightness in a dark room. I’m a bit disappointed, given the price.

Last, and probably most divisive: It’s so damn loud. Topre keyboards are generally quieter than their mechanical counterparts, but the Realforce RGB’s Topre implementation rivals Outemu Blue switches for the loudest modern keyboard I’ve had cross my desk. Depressing a key isn’t so bad, but on rebound it makes a loud, rattly clack that’s much louder than other Topre boards I’ve used—perhaps because of the stem design? I’m not sure.

Oh, and the cable is cheap rubber, and impossible to detach. That’s another oddity for one of these high-end keyboards.

Even a subpar Topre keyboard is still a pretty damn good typing experience. If you (and your loved ones) can get over the noise issue? Well I’ve found the Realforce RGB pretty enjoyable to use day-to-day, and have actually moved it back onto my desk a few times now. I like the feel of Topre switches for productivity, even if they’re a hard sell for gaming.

But given the backlighting is the Realforce RGB’s main gimmick, and only moderately successful at that, I’d wager most Topre fans are probably better off with a different keyboard. Get one with fewer compromises. These are pricey investments, and you might as well buy the best. I’ve heard great things about the non-RGB Realforce 2, even.

For the non-Topre fans, just give thanks you haven’t gone so far down this rabbit hole that you’re paying $300 for a keyboard. Tear your gaze from the void while you still can.

The Realforce RGB functions as advertised in that it’s a Topre keyboard with full RGB backlighting, but some of the Topre magic’s been lost in the transition. Oh, and it’s silly expensive.