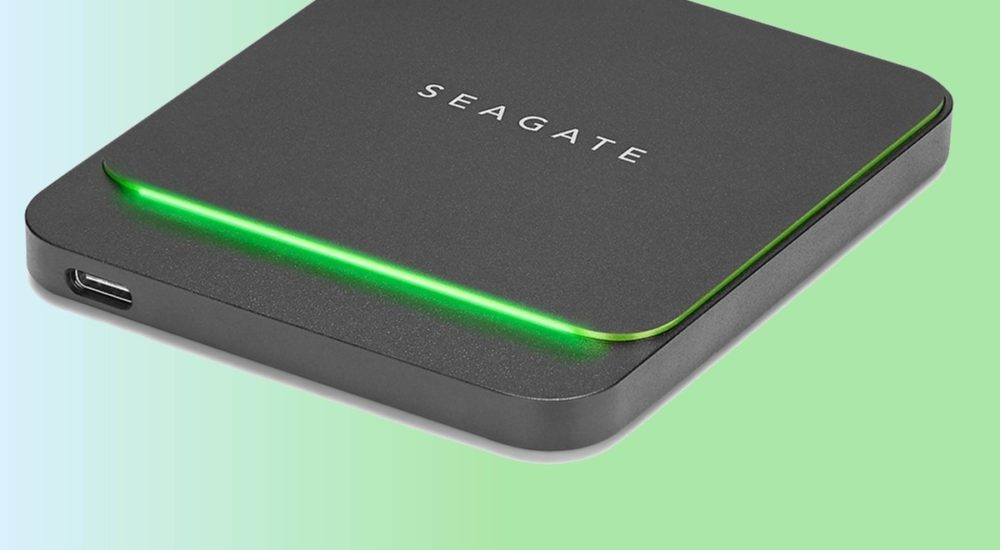 Seagate’s BarraCuda Fast SSD lives up to its name, but only if you’re talking about external USB storage with SATA drives inside from a couple of years ago. Most vendors have moved on to NVMe internals, to take advantage of the doubled bandwidth SuperSpeed USB 10Gbps offers.

That wouldn’t be a big deal if the BarraCuda Fast SSD were cheaper, but it’s priced nearly the same as NVMe drives such as the Samsung T7.

Most external drives opt for a rectangular shape, but the Seagate BarraCuda Fast SSD marches to a different drummer. A squarish drummer, as the drive is about a half-inch longer in one direction. In fact, I hate to say it, but it made a very nice coaster for my desk.

The BarraCuda Fast SSD is available in three capacities: 500GB ($110 on Amazon), the 1GB size we tested ($180 on Amazon), and 2TB ($350 on Amazon), respectively. It’s billed as a USB-C drive, which tells you nothing other than it sports Type-C connector. As mentioned, the USB is SuperSpeed 10Gbps. The drive technology inside, if our tests are to be believed, is SATA, not NVMe, as with some of the only slightly pricier competition.

The drive carries a three-year warranty. Seagate doesn’t provide a TBW (TeraBytes that can be Written) rating, however, for the normal user, that shouldn’t be a concern. SSDs are outlasting estimates in droves.

One design detail surprised me: The Type-C port is located on the same end of the drive as the thin, green LED band. If your cable orients the drive in the wrong direction, you can’t see the friendly Kermit-like lighting. Habits vary, but I would’ve put the port on the other end, or the side.

The drive ships with the Seagate Toolkit software, which is handy for syncing data to the drive. Alas, it won’t allow you to change the color of the LED as you can with the Seagate Gaming SSD.

The BarraCuda Fast SSD lives up to the second part of its name—within the limits (around 550Mbps) of its apparently SATA internals (Seagate would not confirm). It’s speedy, though not quite as speedy as Samsung’s three year-old T5. The results were so close, however, that performance really shouldn’t be the deciding factor. 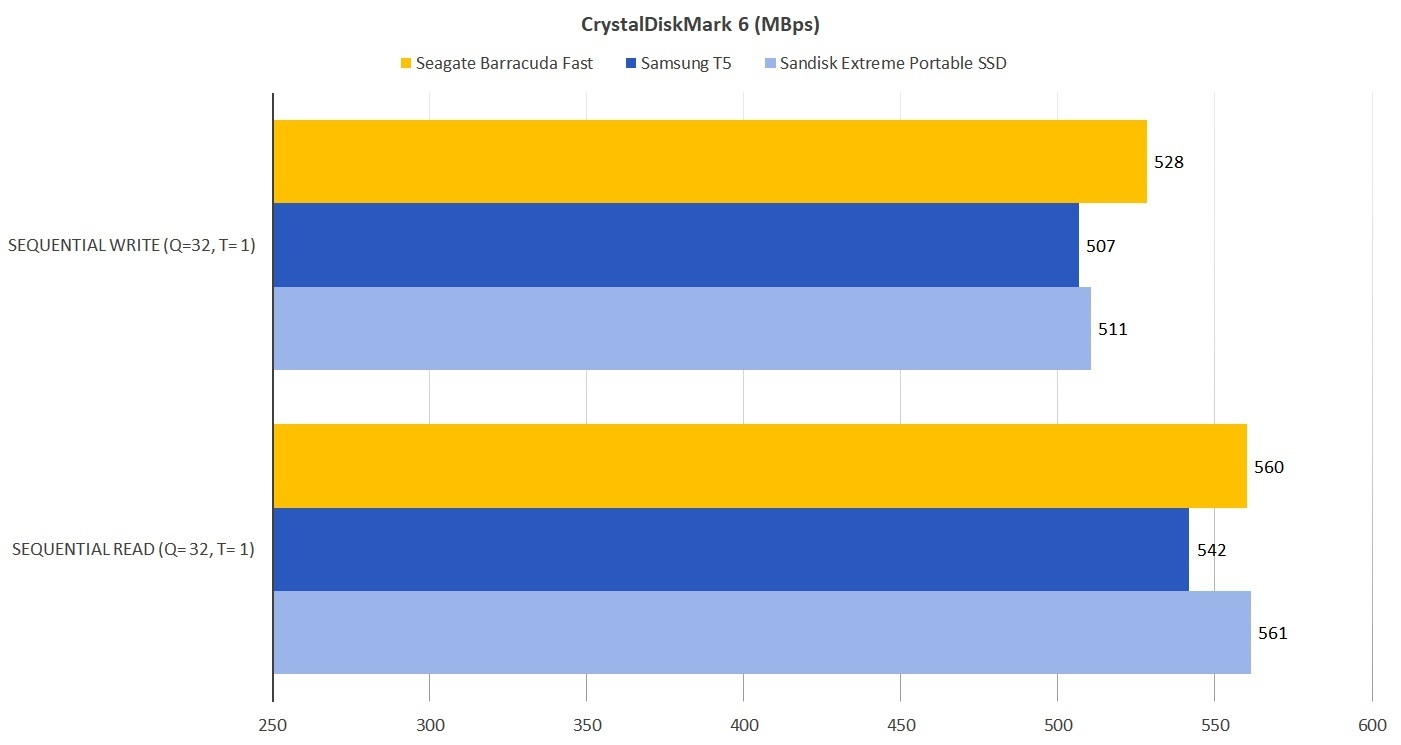 As you can see above, CrystalDiskMark gave the BarraCuda Fast a nice edge in write performance, and a statistically irrelevant deficit in reading. 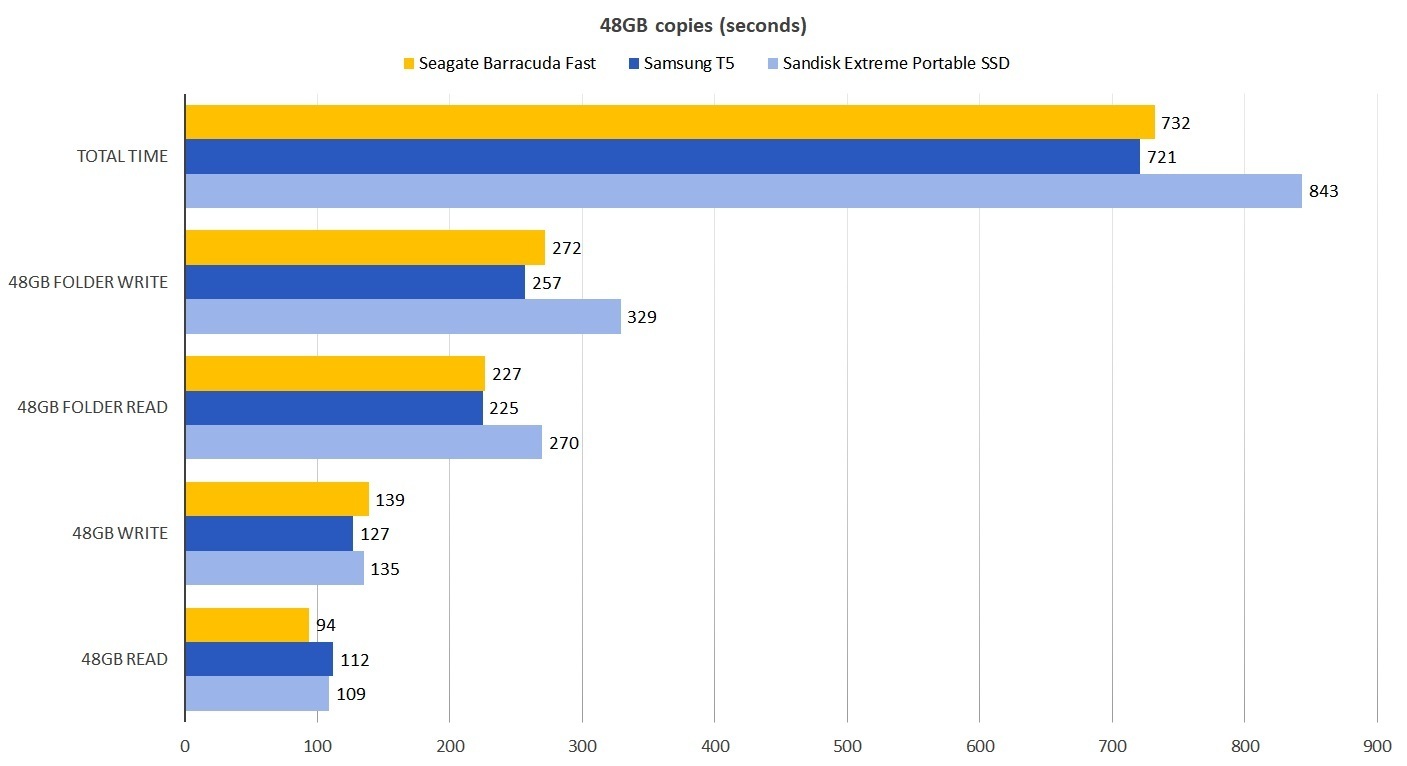 The BarraCuda Fast also played second fiddle to the T5 in the 48GB tests (above), but cut over a minute off of the T5’s 450GB copy time as shown below. 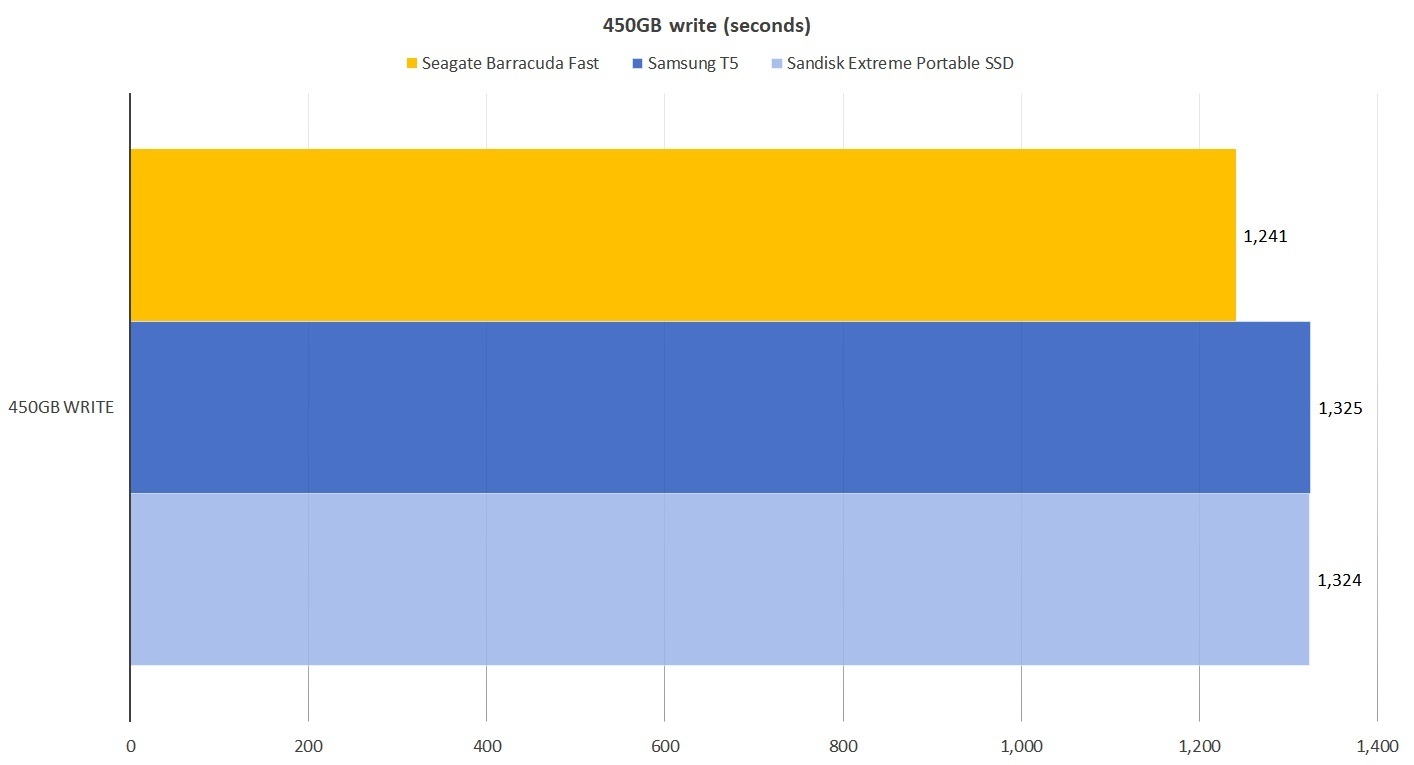 The BarraCuda Fast is a very good performer for a SATA-based drive, but so is the T5. However, there’s that pricing issue again—much faster NVMe-based USB SSDs, such as the SanDisk Extreme Portable Pro SSD and Samsung T7, cost only a little more. The graphic below shows just how much faster in everyday use the competition is. Twice the performance for another $10? Yup. 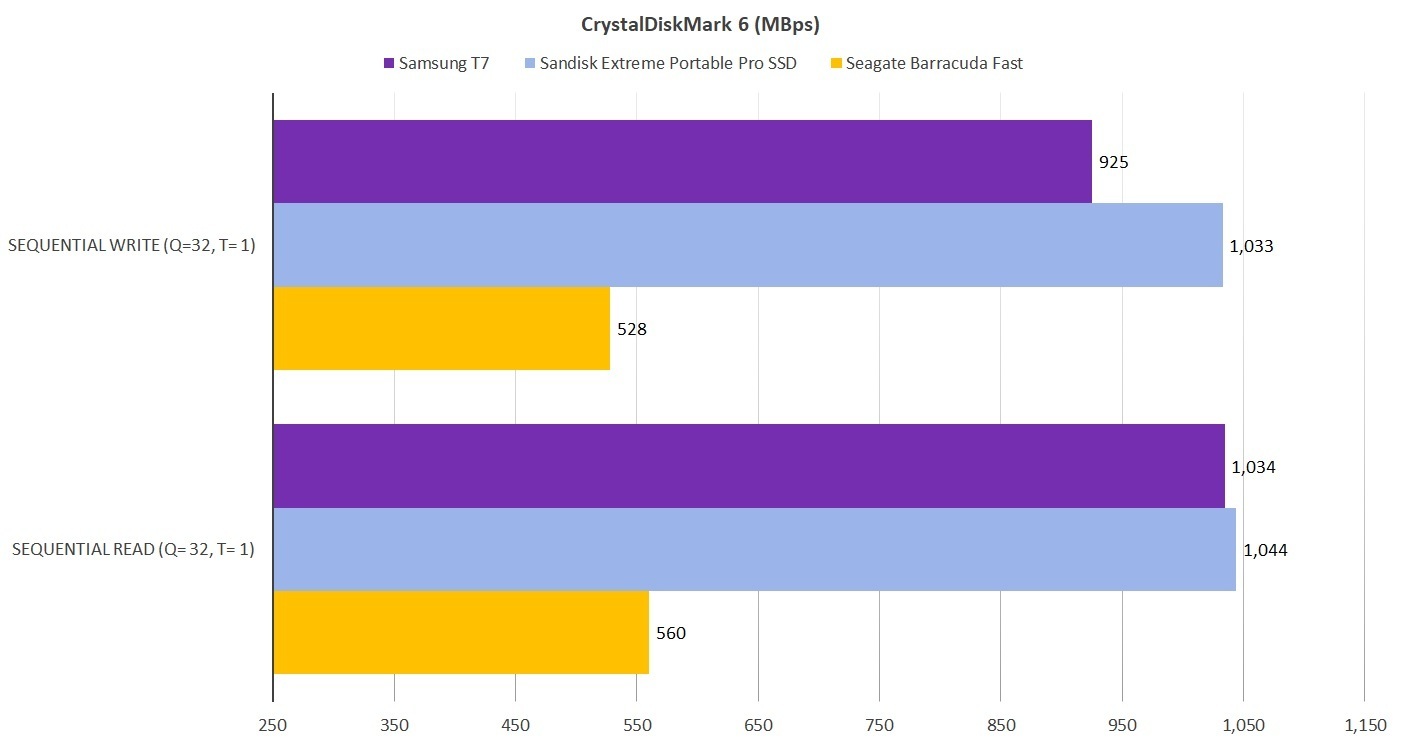 Note that the Samsung T7 will slow down quite a bit when its cache runs out, but for most purposes, it’s significantly faster. The SanDisk Extreme Portable Pro SSD is easily the fastest of three.

A nice drive, but…

I like the Seagate BarraCuda Fast SSD. There’s just something about the styling, and yes, the LED highlighting, that’s quite appealing. It’s also a good performer for the the technology involved. At a lower price point, I’d be all over it.

However, you can get twice the performance for only a little more. That, my friends, makes it a bit tough to recommend the BarraCuda Fast SSD. Unless of course, you’re dead-set on the idea that it’s hip to be square.

For a SATA-based SuperSpeed USB 10Gbps SSD, the BarraCuda Fast is a very good performer. It’s also good-looking. But you could get a much faster NVMe-based drive for about the same price.