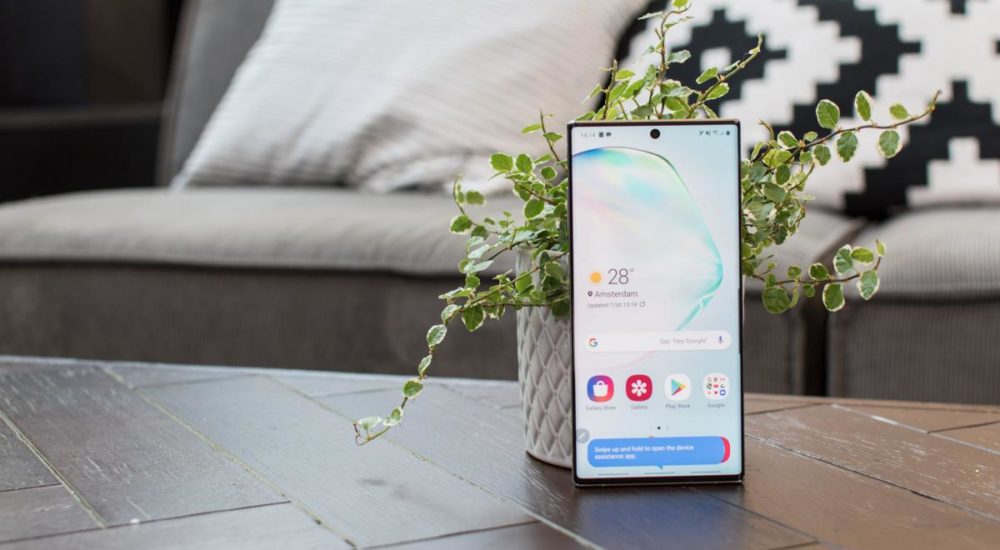 Dawn finally breaks on the Galaxy Note 10, but Samsung’s revamped phablet isn’t quite the major upgrade we were hoping for

With the same predictability as the setting sun, Samsung has unleashed its next-generation phablet to the world. Continuing to carve out a smartphone niche, Samsung is yet again taking a leaf out of Dom Joly’s rulebook and releasing an absolute monster of a phone, complete with a detachable stylus for on-the-go doodling.

Naturally, this year’s Note is a big’un that’s equipped with a smörgåsbord of niceties. Not only does it have a massive screen that occupies almost the entirety of the phone’s frontage, but it’s also the first-ever phone to benefit from Samsung’s latest mobile chipset, the Exynos 9825. Provided you’re in the UK that is.

However, now that Samsung has finally managed to fix the Galaxy Fold’s screen woes – with a release date pencilled in for September – perhaps the Note 10 is no longer as immediately headline-grabbing as its bendy alternative. 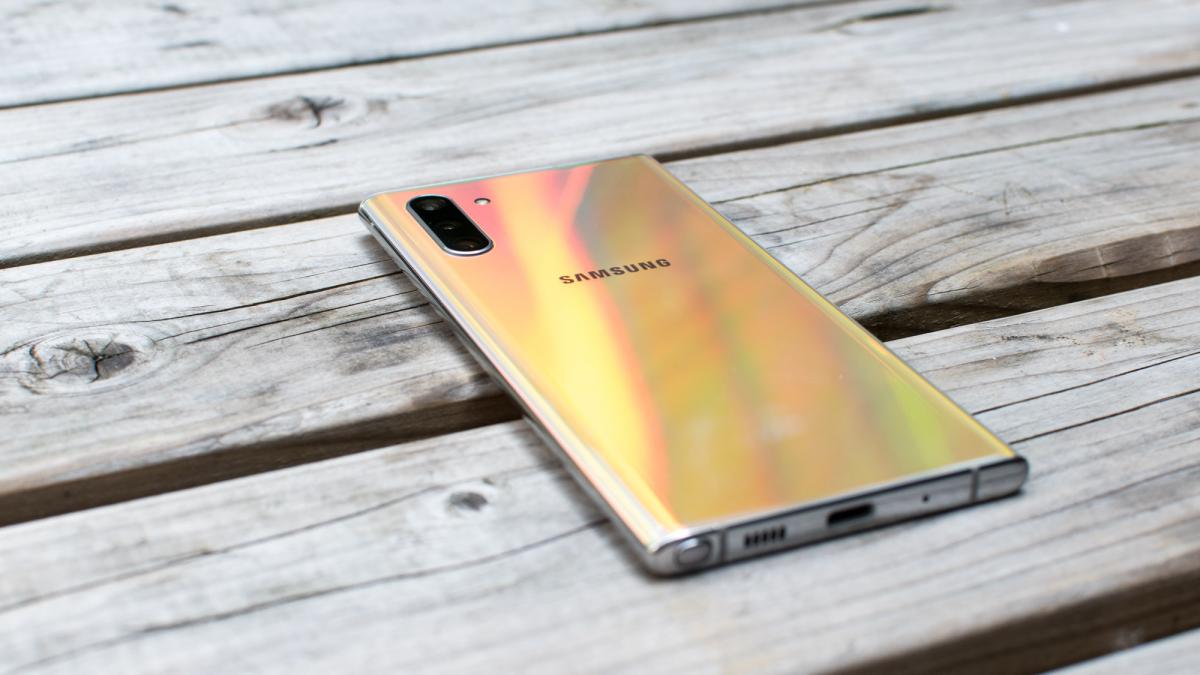 Even so, the Galaxy Note 10 remains every bit as impressive as any smartphone has any right to be. It might represent a mere incremental upgrade over last year’s Note 9, but its successor continues to lead the charge of Samsung’s smartphone output.

Kicking things off, the eagle-eyed among you might have noticed that the Note 10 looks ever-so-slightly different this time around. The most dramatic change is that the 6.3in screen – despite measuring 0.1in smaller than last year’s phone – now reaches out further towards the phone’s edges, allowing for drastically skinnier side bezels and an improved screen-to-body ratio of 93.2%.

The Note 10’s forehead bezel, in particular, is slimmer than ever thanks to the centralised hole-punch notch which houses the 10-megapixel selfie camera. The Galaxy S10 has a similar arrangement, although its right-mounted approach looks much cleaner in my opinion. 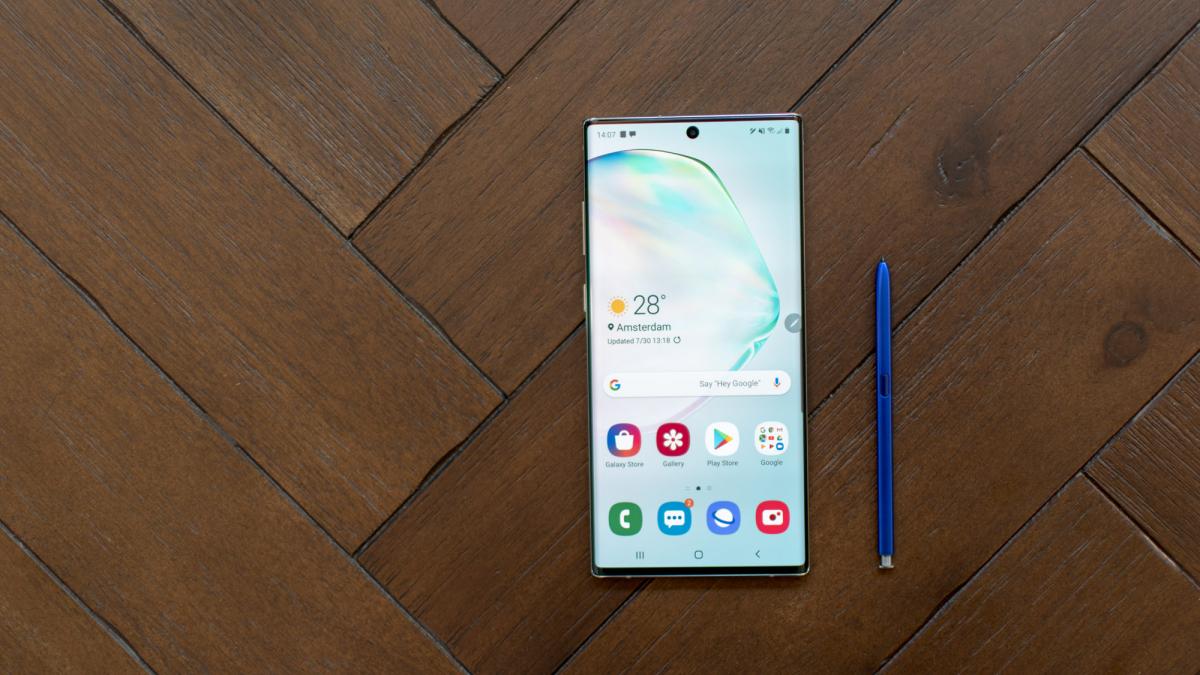 The Galaxy Note 10 is fitted with Samsung’s Dynamic AMOLED panel, with a slightly pared-down FHD+ resolution (2,280 x 1,080). Last year’s Note 9 – going as far back as the Note 4 in 2014, in fact – benefitted from a higher resolution display, although I expect this is both a cost-saving tactic and a drastic battery-increasing measure when you consider the capacity has reduced in size from 4,000mAh to 3,500mAh.

Regardless, the Note 10’s screen remains as lovely as ever, producing bright, vibrant-looking images that appear to jump right out of the screen during my brief time spent with the phone. As this is one of Samsung’s AMOLED HDR 10+ panels, you can expect an effectively perfect contrast ratio and accurate colours, too.

The phone’s various physical elements have changed slightly, although in some cases, not for the better. Starting with the positives – mercifully, Samsung has finally ditched the dedicated Bixby button, with only a power button and volume rocker positioned on the left edge. This is a smart move on Samsung’s part when you consider that you never really needed a proper button to activate its naff digital assistant in the first place. 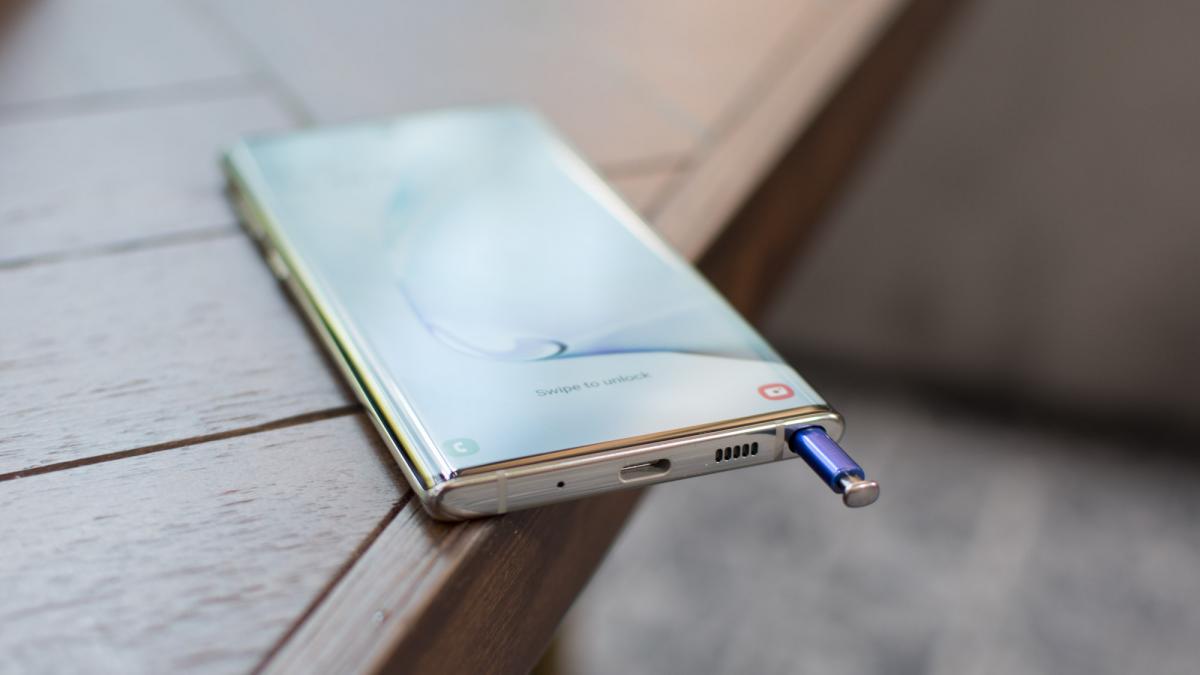 What isn’t a favourable move, on the other hand, is the bizarre decision to remove the 3.5mm headphone jack. This, like many things, was leaked beforehand, but the blow hasn’t been softened – if you were planning on picking up Samsung’s latest phablet, you might want to invest in a decent pair of Bluetooth headphones. If not, you could always rely on the usual convoluted workaround, as there’s a USB Type-C to 3.5mm headphone adapter in the box.

Elsewhere, dust and waterproofing to the IP68 standard have carried over from previous generation Notes, along with a protective sandwich of Gorilla Glass on the front and back of the phone. The Galaxy S10’s in-display ‘ultrasonic’ fingerprint sensor also makes an appearance, which allows you to unlock the phone by simply placing your thumb on the bottom portion of the screen.

The Note 10 can be picked up in two flavours in the UK – Aura Glow and Aura Black. Depending on which colour you choose, the back of the phone shimmers nicely whenever light catches the rear, producing a rather lovely-looking rainbow effect. You can see this quite clearly in my hands-on images. 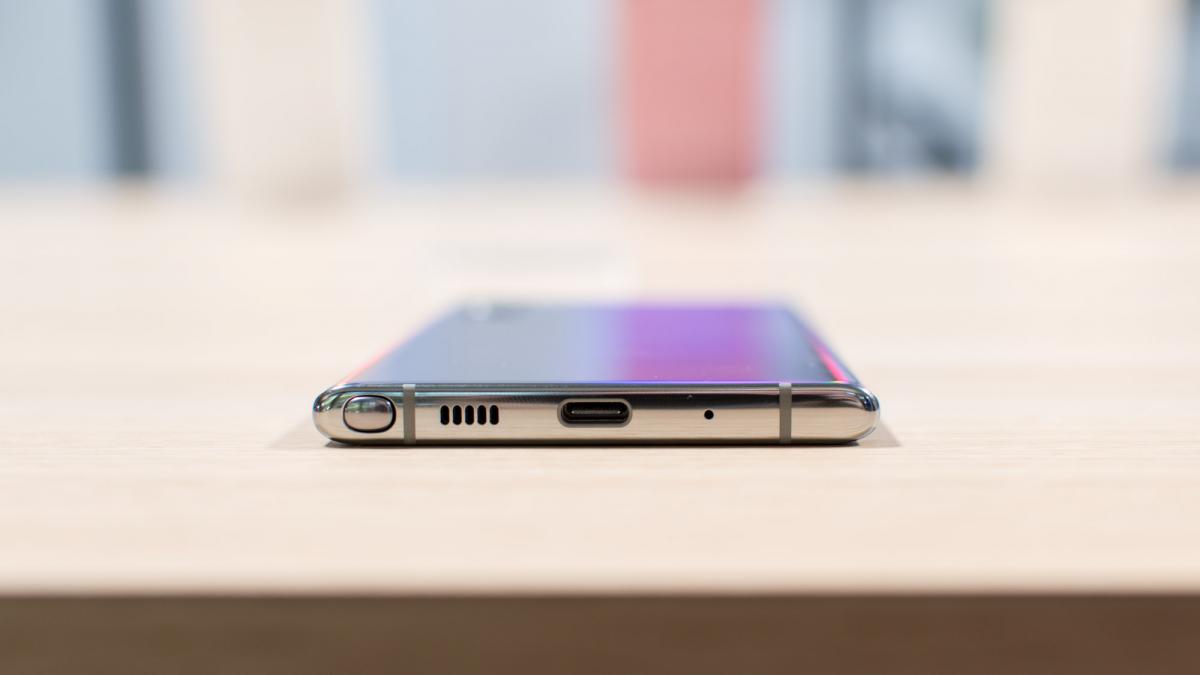 Speaking of which, the rear cameras have shifted to a vertical arrangement towards the back-right edge. The specifications haven’t changed much from last year’s effort, with the same 12-megapixel, dual aperture (f/1.5-f/2.4) lens working in tandem with the 12-megapixel, 2x telephoto zoom camera. What is new is the addition of a third, wide-angle (16-megapixel) lens which is capable of capturing a 123-degree image. The regular Note 10 lacks the fourth, depth-sensing unit of the Note 10 Plus, however, so your blurred-background portraits might not look quite as effective.

Elsewhere, the Galaxy Note 10 is powered by Samsung’s newest Exynos 9825 mobile chipset, which is built using a more power-efficient 7nm fabrication process, rather than the 10nm Exynos 9810 it replaces. As usual, if you happen to live outside of the UK and some countries in Europe, then you can expect to find Qualcomm’s Snapdragon 855 Plus running the show. 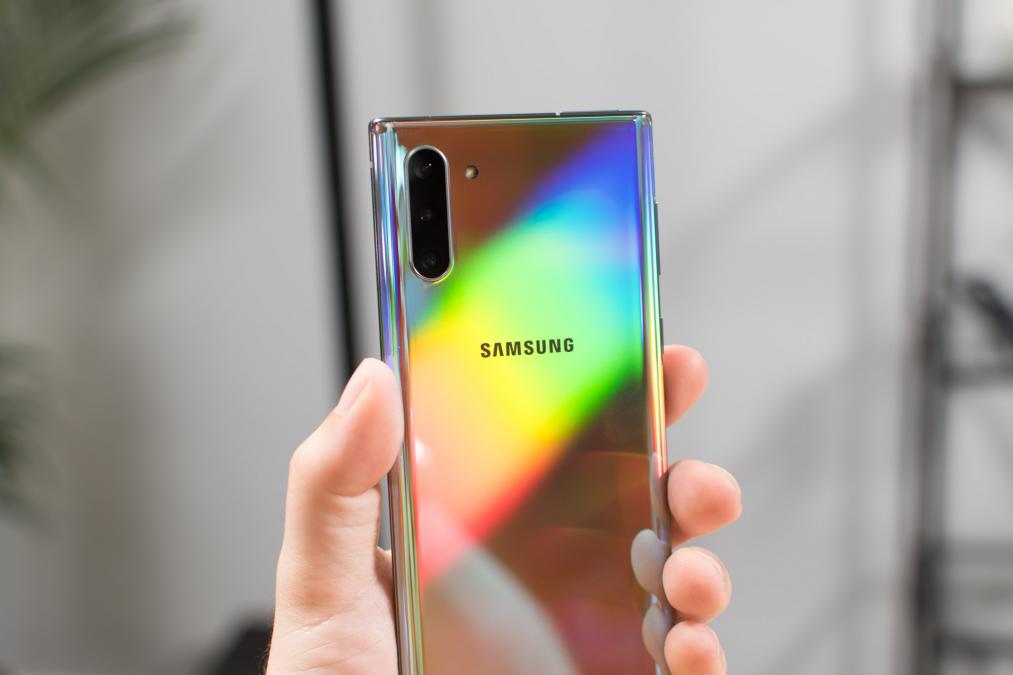 No matter which processor is inside, the Note 10 is backed up by 8GB of RAM and 256GB of non-expandable storage. It’s also running the latest version of Google’s mobile operating system – Android 9 Pie – and, strangely, uses a slightly smaller 3,500mAh capacity battery to keep things ticking along.

On that (ahem) note, Samsung made a big point to talk about the Note 10’s slim vapour chamber and “SuperFast Charge” capabilities. Samsung says the Note 10 should be able to charge for 30mins from empty and provide a day’s worth of moderate use, as well as supporting charging speeds up to 45W.

Finally, let’s discuss the Note 10’s note-taking abilities. Sliding into the bottom right corner of the phone, Samsung’s dinky Bluetooth-enabled S Pen stylus returns, this time with a handful of new motion-based features. These new “Air Actions” allow you to waggle the S Pen to perform certain actions, such as switching between camera modes. It’s a bit gimmicky, yes, but this could be quite handy if your phone isn’t at arm’s reach.

You might be waiting on the Galaxy Fold’s launch with bated breath, but the Note 10 still represents the culmination of almost eight year’s worth of smartphone innovation. Remember when the industry first laughed when the original Note’s “massive” 5.3in screen was unveiled? Nowadays, a 5in phone is considered “compact” – just look at how far we’ve come in such a short space of time.

However, the Note 10 still suffers from the same key criticism I had of last year’s phone. Samsung’s notetaking phablet is merely a phone of incremental upgrades – with a few minor tweaks in a couple of places, and not all of them are for the better. It may still be at the top of the class, but with the lack of a 5G variant and that avaricious asking price, the Note feels like an upgrade that’s increasingly hard to justify.