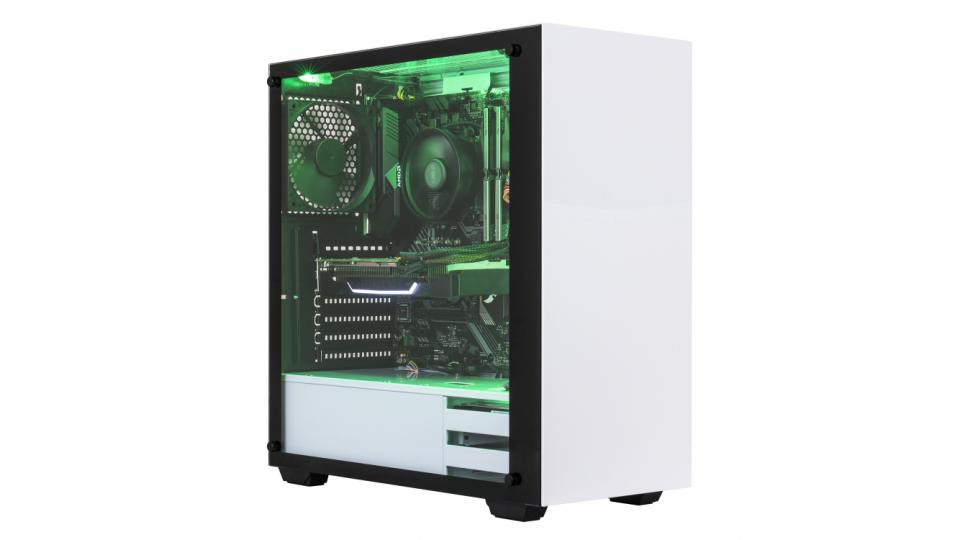 A good all-rounder, but in exchange for slightly less power you can get a much better deal

£200 can go a long way in PC building. This is well known to anyone who’s attempted a DIY system: it can upgrade the graphics card to a whole other tier, it can massively boost storage capacity and speed, and it can get you a CPU with significantly more cores and multitasking muscle.

However, spread that £200 too thinly, and what initially seems like a major overhaul can end up feeling less worthwhile than if you’d focused on making just one or two key upgrades.

This is precisely what’s happened with the Overclockers XVI Gamer: at £900, it’s £200 more than the Gaming XVI Essential, and is inarguably a more powerful and better-equipped system. Whether it’s worth the extra cash, however, is a different matter.

First, a rundown of what’s different between the two PCs, and what stays the same. The most notable non-change is that both have AMD’s hexa-core Ryzen 5 2600 CPU, although since the XVI Gamer has 16GB of RAM – twice that of the Gaming XVI Essential – it should have the edge on multithreaded performance. 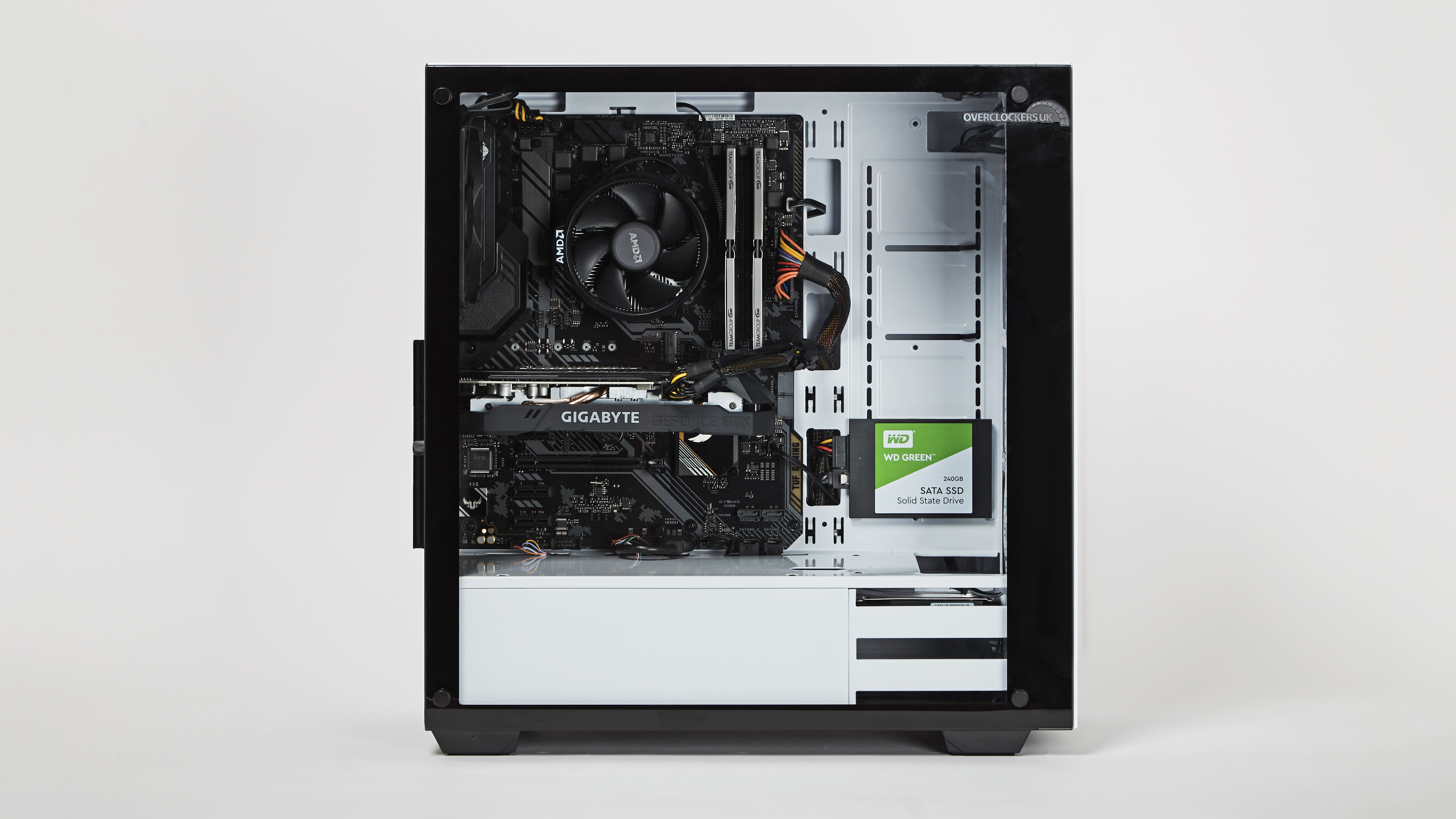 The XVI Gamer also comes, it must be said, in a much slicker chassis. Instead of basic black plastic and an acrylic side window, this PC’s case is a striking white number, with a full-sized tempered glass side panel. Through the latter, you can see a much cleaner internal chamber, thanks to the PSU shroud covering up more components and cables than the uncovered Gaming XVI Essential.

The front panel is still made of plastic, but it’s a pretty good approximation of metal, and the sharper corners further contribute to an overall more grown-up look. Except, perhaps, for the dazzling amount of RGB lighting.

It’s not that every single component has its own LEDs, but a set of two strips bathe the entire main chamber and then some. These are set to slowly cycle through different colours by default, and – almost entertainingly – they’re strong enough to completely swamp the specks of additional RGB lighting on the motherboard. This will appeal to some, of course, but if you’re not keen on throwing a disco on your desk, then you can tweak the colours or turn off the strips entirely.

CPU performance is, as expected, similar to that of the Gaming XVI Essential. In our 4K benchmarks, the XVI Gamer scored 135 in the image test, 212 in the video test, 248 in the multitasking test and 217 overall, so anything from basic browsing to home video editing will run just fine. The extra RAM doesn’t seem to make an enormous difference: 248 is a nifty little improvement on the Gaming XVI Essential’s multitasking score of 231, but the difference in overall scores is just 10 points in the more expensive system’s favour. 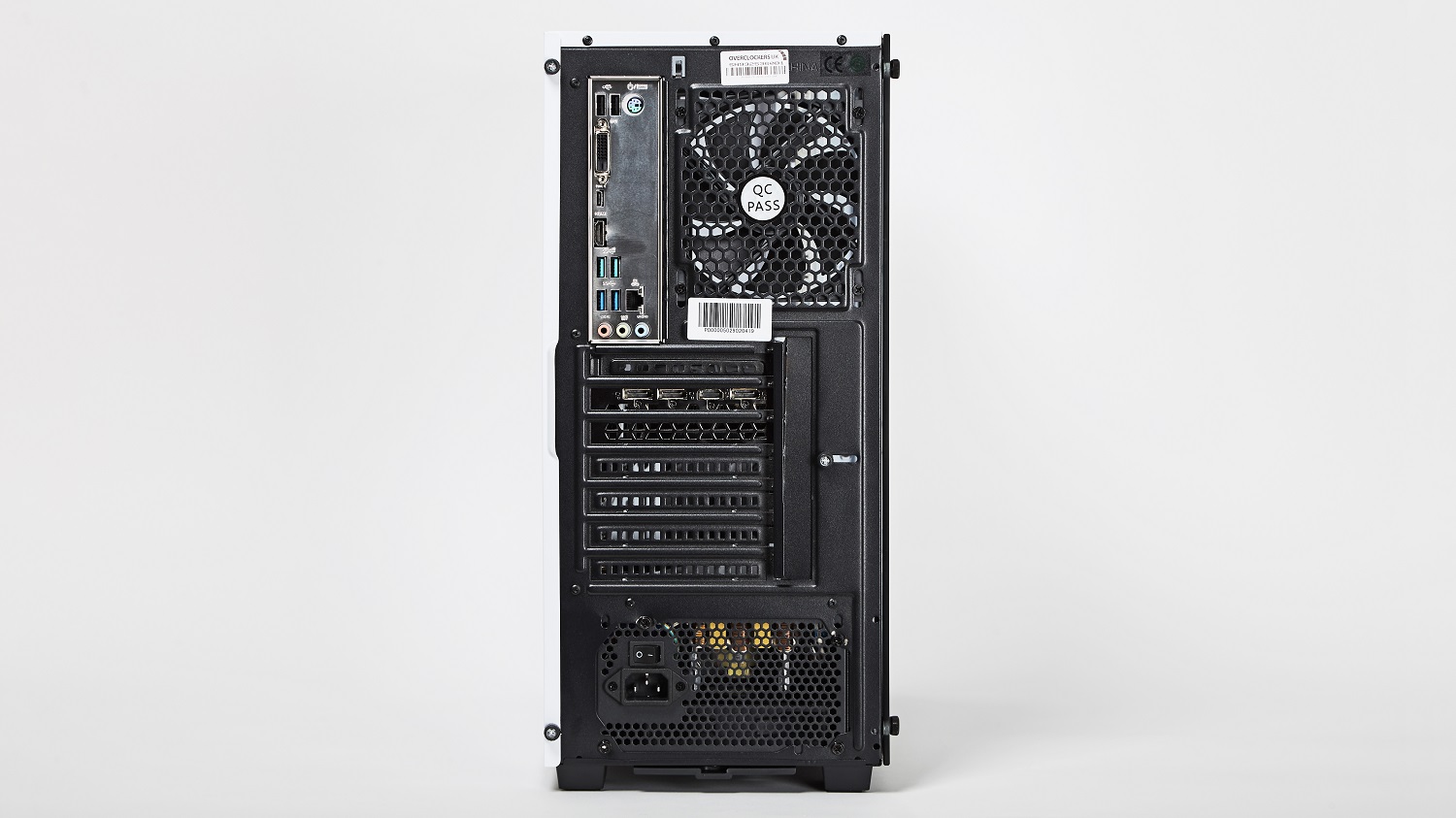 In everyday use, there wouldn’t be much of a tangible difference unless you’re regularly hoarding browser tabs or running multiple high-intensity applications at a time. The GTX 1660 Ti, too, doesn’t prove itself to be a particularly pronounced upgrade on the standard GTX 1660.

The XVI Gamer is still an appropriately capable gaming rig: in Metro: Last Light, the toughest of our test games, it managed a smooth 62fps at 1,920×1,080 with Very High quality and SSAA enabled. It even broke through the 30fps barrier at 2,560×1,440; with 36fps at this resolution you can afford to disable SSAA for a big jump up to 69fps.

4K demands greater sacrifices, as the PC only makes it to 16fps with everything maxed out, but drop down to High quality with SSAA off and the resulting 46fps will suffice. Undemanding games will zip along, judging by Dirt Showdown. Here, the XVI Gamer never required the lowering of settings, as it sailed to 147fps at 1,920×1,080, 132fps at 2,560×1,440 and 75fps at 3,840×2,160, all with the Ultra quality preset and 4x MSAA. By scoring 10.9 in the SteamVR Performance Test, a mere 0.1 off a perfect mark, the XVI Gamer also distinguishes itself as a great system for VR gaming.

If you’re unfamiliar with this test, it judges the extent to which you’d need to lower graphics quality settings in a big-budget VR game before achieving a stable 90fps; what a score of 10.9 means is that you could happily leave every setting at its best and still get the requisite smoothness. Overshadowing all this success, however, is the fact that the Gaming XVI Essential performs almost as well, for £200 less. 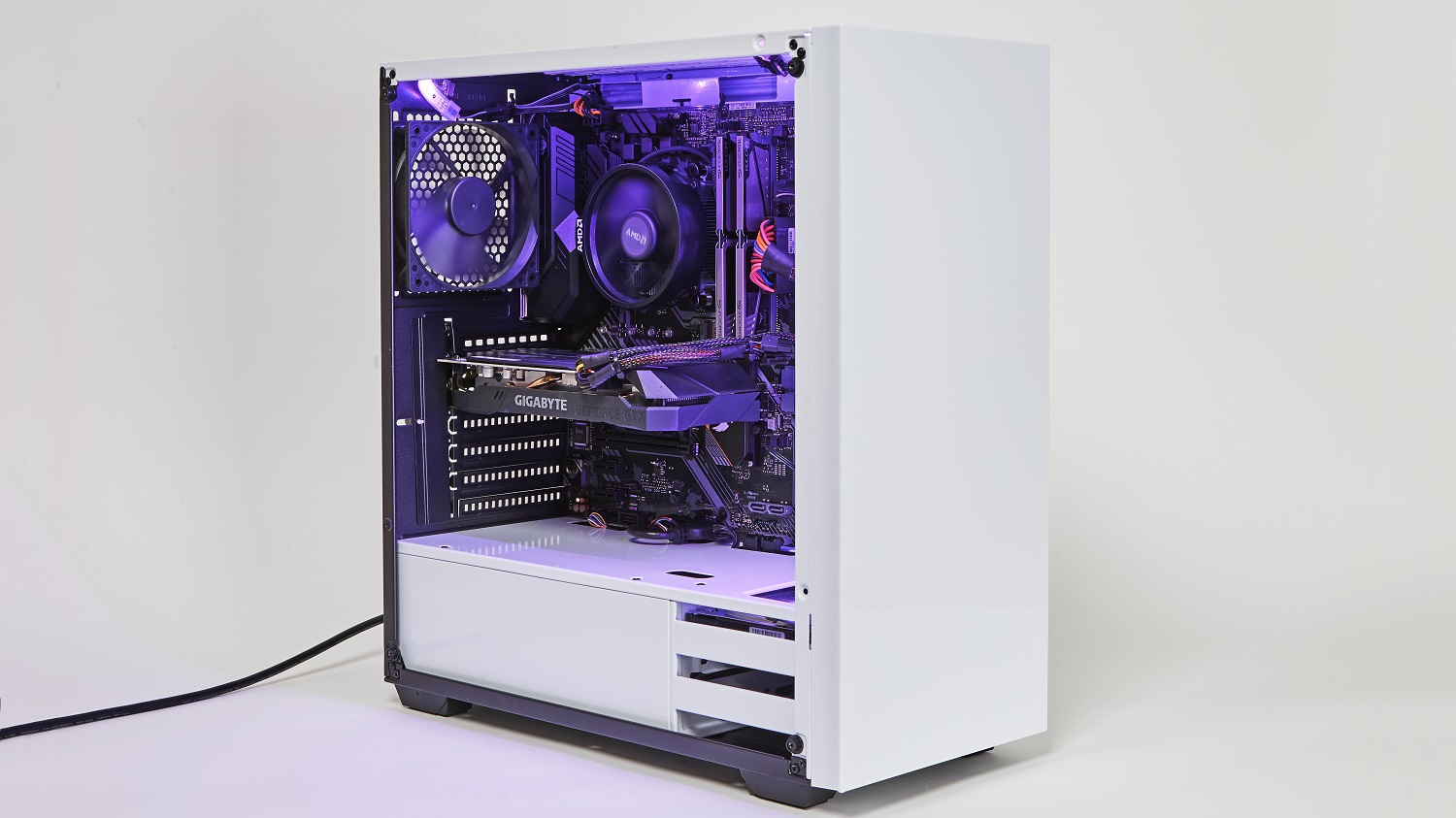 The biggest difference in these tests is the cheaper system scoring 114fps in Dirt Showdown at 1440p; otherwise, it’s all just tiny gaps of 10fps or less. It’s perfectly fair to want that extra sliver of performance anyway, particularly if you want a PC for more competitive play. The issue is that no-one else will see much of a benefit with the GTX 1660 Ti compared to the GTX 1660.

There’s no additional storage space, either. Granted, the SSD’s read speed is respectable for a SATA drive – we measured it at 519MB/sec – but a write speed of 346MB/sec is poor. For £900, we don’t think it’s unreasonable to expect a little bit more out of storage, whether it’s a larger SSD or hard disk, or a switch to NVMe instead of SATA. The £700 Palicomp AMD Abyss and PC Specialist Apollo S2 use this much faster SSD platform, so it’s not necessarily out of reach.

There’s also an empty set of RAM channels and an M.2 slot, so you can easily add NVMe storage later if you wish. The rear I/O panel is a good one, too. Instead of just USB2 and USB3 ports, you get two of each plus two faster USB3.1 ports and a USB Type-C connector. That’s on top of a PS/2 port, Ethernet connector and three 3.5mm audio jacks, with the graphics card providing one HDMI output and three DisplayPort sockets. In the unlikely event that you run out of space on the back for peripherals, another welcome benefit of the case is its front I/O panel, which contains two USB2 ports and one USB3 port. 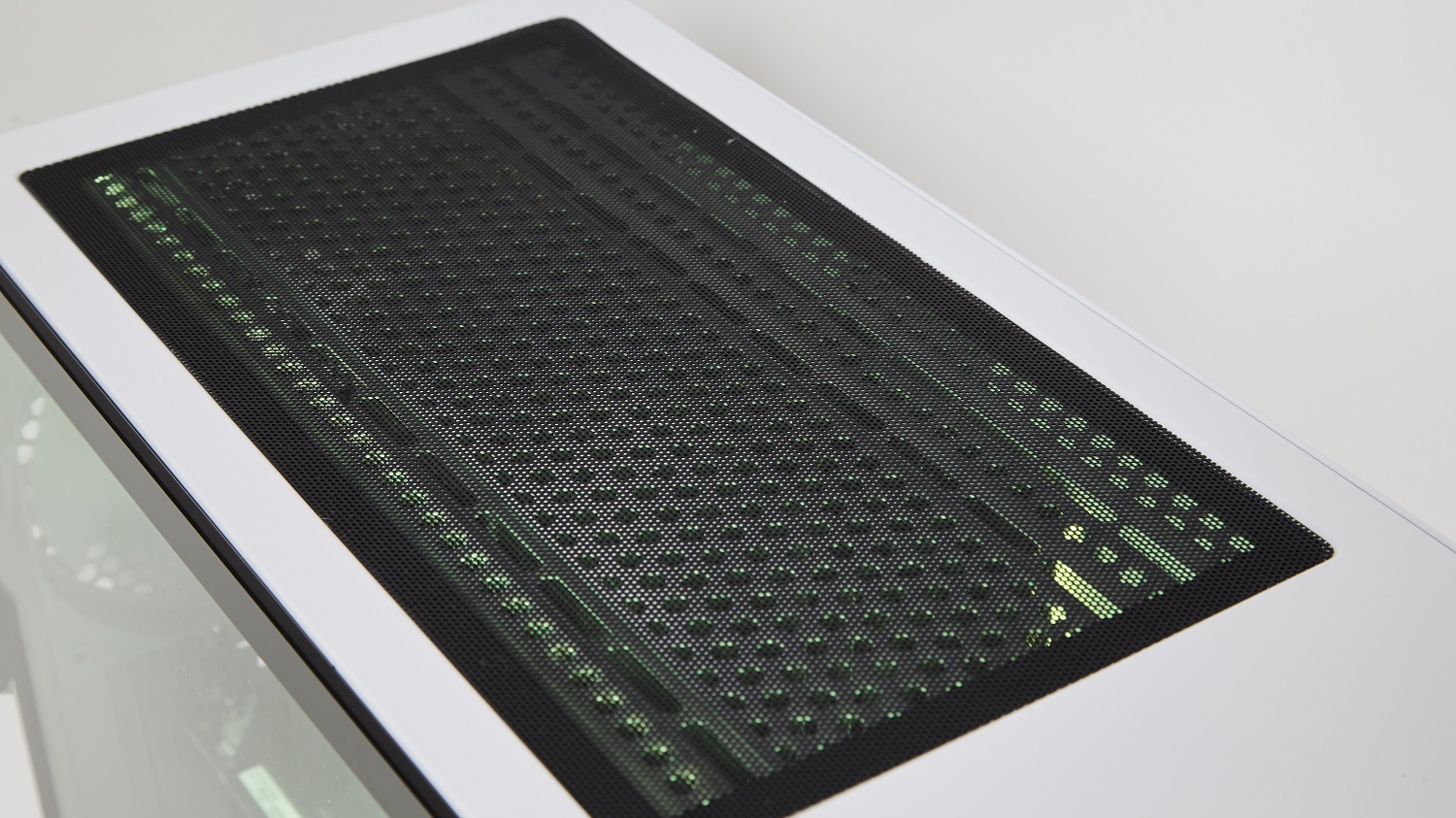 Internal storage upgradability is simple, but practical enough: there’s room to easily add one more hard disk alongside the one that’s already there, and a set of two 2.5in drive mounts behind the motherboard tray provide extra SSD space. The pre-installed SSD is affixed directly to a set of mounting holes on the chassis, and it looks like these could hold a couple more, were it not for some cable ties in the way.

In case it wasn’t already clear, we’re not suggesting you rush out and buy the XVI Gamer, even if its biggest problem is the existence of the Gaming XVI Essential, rather than any serious design or hardware flaws.

Most of the differences between the two look bigger on paper than they are in actuality, meaning you’d be paying £200 more for a PC with only marginally better gaming performance and almost identical CPU performance. The motherboard and case are clearly upgrades, but aren’t worth the premium by themselves.

We wonder if it would have been better to focus on one aspect of the Gaming XVI Essential – which is already a great PC – and make that one aspect significantly better, instead of the XVI Gamer’s approach of making small adjustments that ultimately don’t add up to much. It’s still a decent enough desktop PC, but the smart money would be put towards the Gaming XVI Essential, or potentially the AMD Abyss, which has a faster CPU and better storage than both.