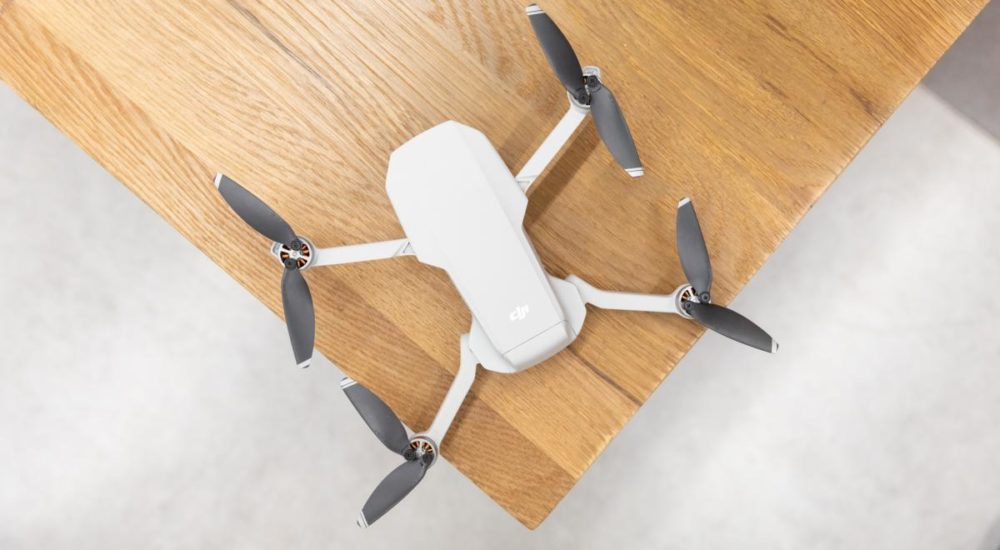 A miniature marvel, the DJI Mavic Mini is a small drone with big ambitions

When new drone laws come into place in the UK on 30 November 2019, every owner of a drone weighing 250g or more will have to register it with UK authorities and pass an online safety test.

If you go out and buy a DJI Mavic Mini, however, you’ll be exempt because its flight weight – proudly emblazoned on the drone’s right flank – nudges a single gram below that limit.

DJI Mavic Mini review: What you need to know

The DJI Mavic Mini is the lightest, smallest drone – or flycam as DJI is now calling this – the company has ever made. It weighs 249g with the battery installed, although I clocked it at an even lighter 246g on my scales with the camera cap removed, and it folds up small enough to fit on your palm.

This is no toy, however. It comes with a fully mechanically stabilised 12-megapixel camera, mounted in the nose, which can shoot video up to 2.7K in resolution. It comes with a compact remote control in the box, with a transmission range of up to 2km, and its flight time of 30 minutes is on par with much bigger drones. 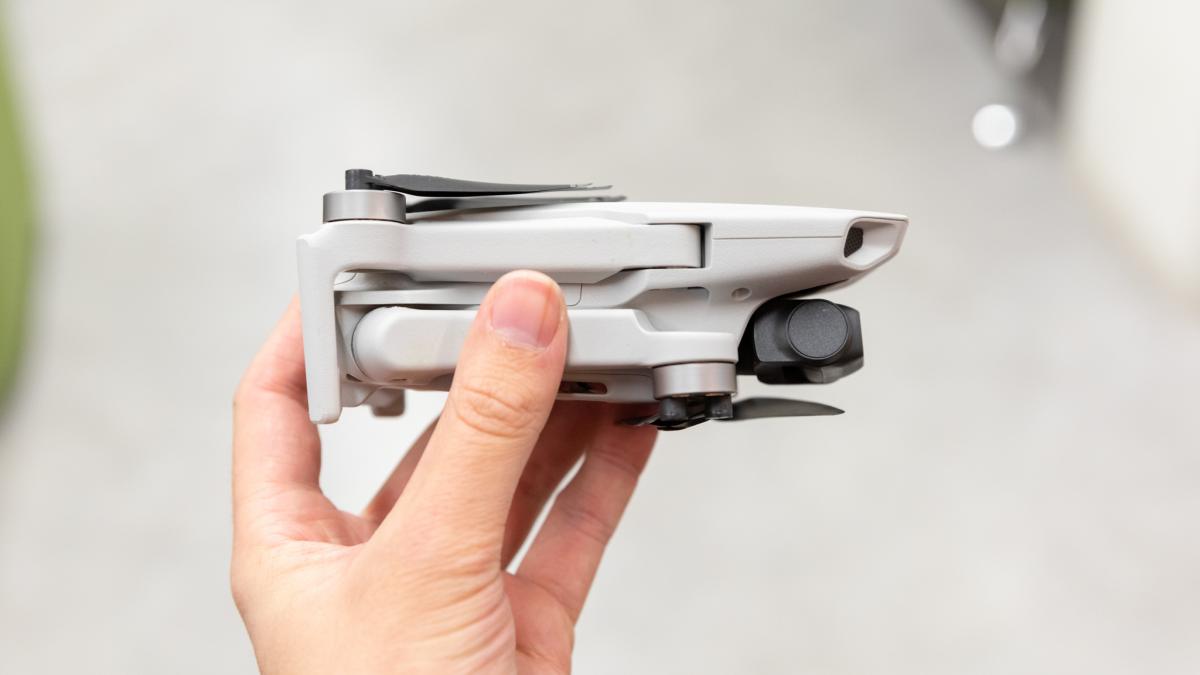 The DJI Mavic Mini may be small, then, but it’s a serious drone and that’s reflected in the price. The basic package will set you back £369 and it’s £459 for the Fly More bundle. The latter includes three batteries, all-round propellor guards and a triple-battery charging hub. Given that extra batteries cost £45 a piece and the charging hub is £35 when sold separately, the Fly More bundle represents decent value for money.

In the absence of the DJI Spark, which has now been discontinued, the Mavic Mini’s principal competition comes from French drone maker Parrot and its Bebop 2 drone,which costs around £366. It’s altogether more bulky than the Mavic Mini, double the weight and can only shoot 1080p, 30fps video. The Parrot Anafi is closer in size and weight, and can shoot 4K HDR video, but Parrot’s flagship drone costs significantly more than the Mavic Mini at £628.

The Mavic Mini’s principal attraction has to be its tiny proportions and super light weight. With its four rotor arms folded away, it’s small enough to sit neatly in the palm of my hand without protruding over the edges. The folding mechanism is the same as with its more expensive (and more advanced) siblings, the Mavic Air and Mavic Pro: to get it ready to fly, simply pull out the front arms horizontally, then pull the rear arms down and backwards.

With folding rotor blades already fitted (they’re secured via tiny Philips-head screws), all that remains to do is install the battery. This fits under a flimsy plastic flap at the rear of the drone, immediately below which you’ll find the microSD slot and a micro-USB port for charging, plus the drone’s only status LED.

There’s no charging port on the battery itself, which is a shame; if you want to charge spares while you’re flying, you’ll have to purchase the charging hub, which takes up to three batteries and comes in the Fly More pack.

Generally, the Mavic Mini’s build quality is fine, especially considering the extremely low weight. The arm hinges feel robust and solid and, although the battery door is a little thin, the rest of the body feels rigidly constructed – much more so than the similarly featherweight Parrot Anafi. It’s good, also, to see that DJI supplies the Mavic Mini with a protective plastic cap to cover the camera mechanism mounted under the nose of the camera. 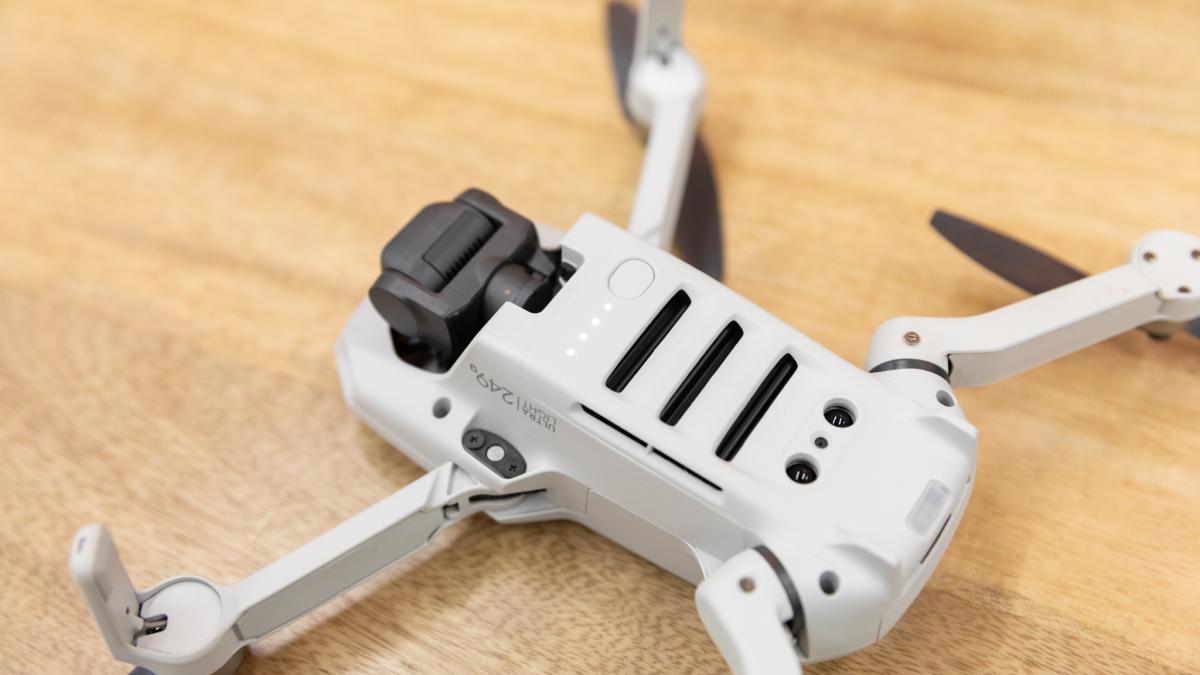 The tiny, rather delicate-looking camera is suspended on rubber mounts to absorb vibrations and has three axes of motorised stabilisation, so no matter how violently you’re flying it, it should produce rock-steady images.

So far, so good, but the Mavic Mini does miss out on some key features, as evident from a quick physical inspection of the fuselage. While the drone has a downwards-facing camera and two sonar sensors to ensure it can hover in one spot without moving around, there are none facing sideways, forwards or backwards to help it avoid colliding with buildings or trees during automated actions. Even the Mini’s forerunner, DJI Spark, had forward-facing sensors, so this is a disappointing omission.

Still, in every other respect, the DJI Mavic Mini works just like its more expensive siblings and, unlike the Spark, it comes with a physical remote control in the box as standard.

As with the pricier Mavic Air, this has removable sticks to enable you to stow it away more neatly, although it doesn’t have a status screen. There’s a battery gauge in the form of four small LEDs spread across the top and that’s your lot. 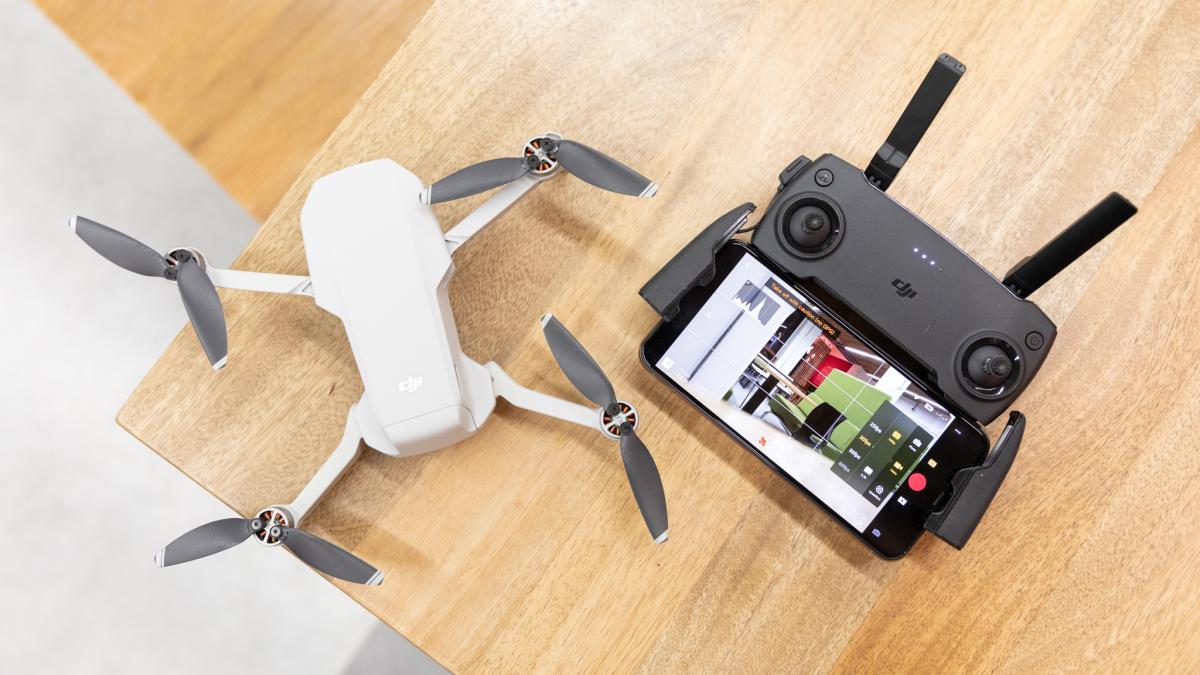 That’s not too much of a problem once you have your smartphone attached, though. As with other DJI drones, most of the drone’s advanced flight and camera features can only be accessed via the accompanying DJI Fly app, which is available on both iOS and Android.

You connect via your phone USB and dock it with the remote control by sandwiching it between a pair of arms that fold out from the bottom of the controller. Once you’ve paired the remote with drone, connected your phone and launched the new DJI Fly app, you’ll be able to see the live images from the drone on the screen of your phone – and adjust the drone’s various settings as well.

This all might sound rather complicated and daunting but it really isn’t. And the fact that DJI has rather dramatically simplified the accompanying app helps hugely in getting to grips with the drone. It’s also rather nice that the DJI supplies a tutorial mode for newbie pilots, which takes them through takeoff, safety checklists and basic controls step by step the first time they take to the skies.

The DJI Mavic Mini’s camera is a surprisingly sophisticated thing. As well as offering incredibly smooth, stabilised video, its image quality is very good. It isn’t quite the step up in quality over the DJI Spark that I had expected, though.

In fact, in some regards the Mavic Mini’s camera takes a step back. Although the resolution is the same at 12 megapixels, for instance, the aperture is a slower f/2.8 versus the Spark’s f/2.6.

If you’re willing to drop down in resolution, you can shoot in 1080p at frame rates up to 60fps, although in the pre-release software I was using this mode wasn’t working and the footage came out at 30fps. Hopefully this will be fixed once the Mini is commercially available.

Quality is what you’d expect from this camera: pretty decent without being amazing. Exposures are generally well judged, even in tricky situations shooting backlit subjects, and colour reproduction is excellent. The limited bit rate of 40Mbits/sec becomes apparent, though, when you look a little more closely. In the clips I’ve captured so far, although there’s clearly more detail and better colour reproduction than the Spark’s 1080p footage, you can see some loss of texture, for example, in expanses of green grass, where compression smears out the finer details.

Flying the Mavic Mini is, as it usually is with DJI’s drones, a perfectly pleasurable experience. It takes off and cruises around exactly as you’d expect it to, responding to stick inputs without noticeable lag and, if you leave it to hover on the spot, it stays put. GPS-based safety features mean you can’t take off in restricted areas and it’s child’s play to set altitude, distance limits and the return-to-home altitude – just tap “Takeoff permitted” in the top-left corner and adjust the sliders.

And while the Mavic Mini is more easily perturbed in light winds than the Mavic Air or Mavic Pro – understandable given its extraordinarily light weight – the video footage stays remarkably stable, especially if you use DJI’s new flight Cinematic flight mode. In this mode, sudden turns and braking are slowed down dramatically, ensuring that footage remains jerk-free. 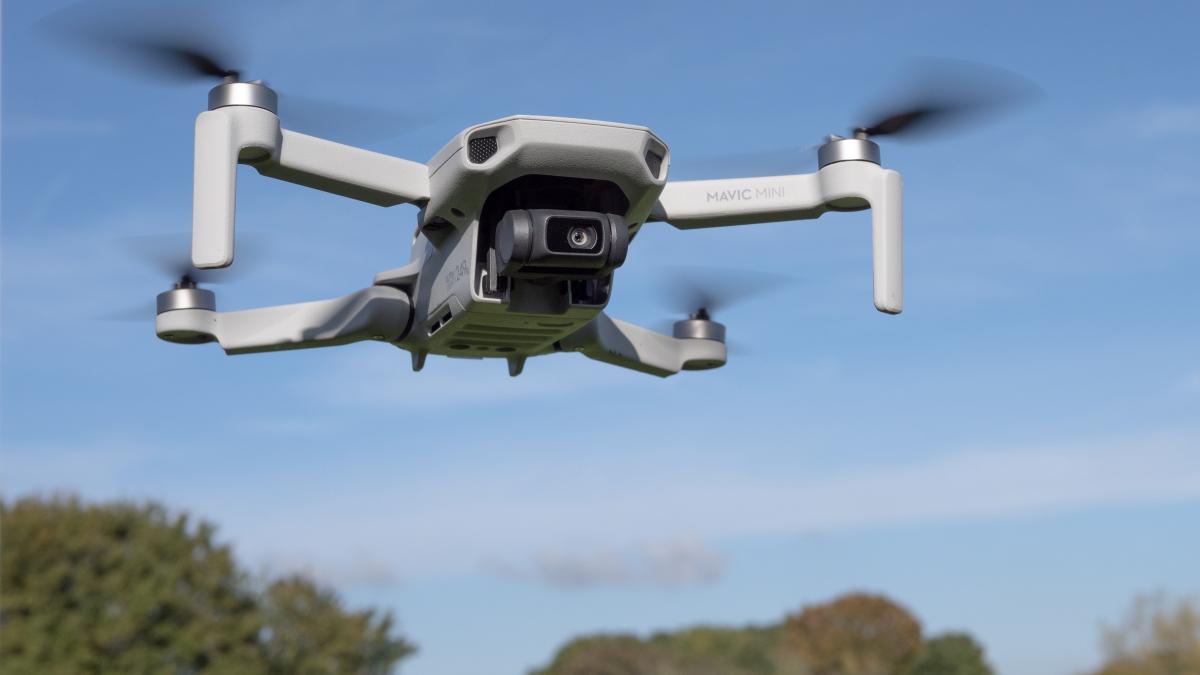 If you want to get the drone to a particular location fast, though, you’re better off using one of the drone’s other flight modes. Sport is the most responsive and unlocks the Mavic Mini’s top speed. In Position mode. the drone is still responsive but doesn’t speed off like an airborne Roadrunner at the slightest tweak of the sticks.

Perhaps the most impressive aspect of the Mavic Mini, however, is its long flight time. Despite its size, the DJI Mavic Mini’s 2,400mAh, 8.7V battery will last up to 30 minutes per charge on a still day. That’s longer than the Mavic Air at 21 minutes and the Parrot Bebop 2 at 25 minutes, and on a par with the far more expensive Mavic 2 Zoom/Pro at 31 minutes. Put in context, it’s also nigh-on double the 16-minute flight time of the DJI Spark. 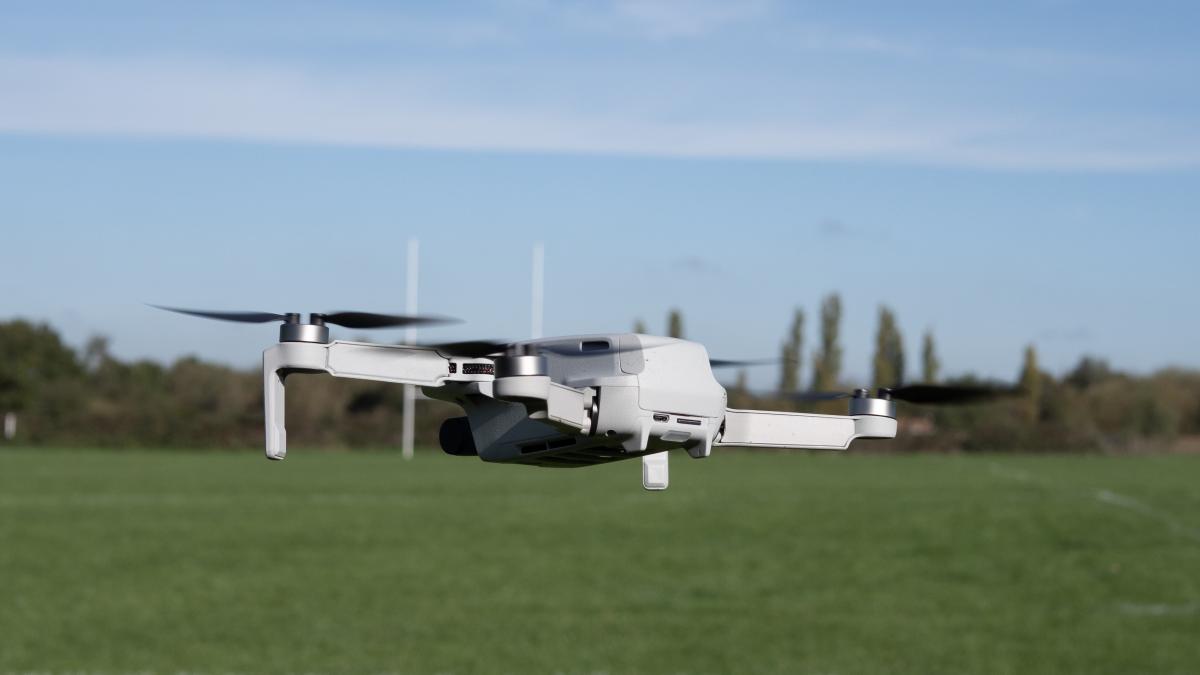 Where the Mavic Mini comes unstuck a bit is in its camera modes and tracking options, which are restricted compared with previous DJI drones. There’s no hyperlapse mode – it’s simply not possible to replicate that capability with the simple tools available on the Mini. It’s also a little annoying that the Mavic Air and Pro’s multi-frame panorama modes haven’t been included, although perhaps DJI was worried that the Mini’s light weight would make these a bit too tricky to pull off with reliability. There’s also no camera-based follow-me mode, which will disappoint extreme-sports fans.

The Mini does, however, have some of DJI’s automated Quick Shot modes to help you create more dramatic shots. Rocket mode sees the drone fly straight up to a preset altitude, with the camera keeping you in the middle of the frame. Choose Circle mode and the drone will fly around you in a smooth circle, again keeping you front and centre; you can set the distance or simply fly the drone to your desired distance, tap the object you want it to circle and hit Start.

With Dronie selected, the Mini flies back and away from you, while with Helix it flies in a corkscrew pattern around you with an increasingly broad radius. Be careful with this mode, though – even with the smallest radius set, you need a lot of space to make it usable

It certainly has its weaknesses, then, but for such a small, lightweight drone, the Mavic Mini delivers big time. It shoots detailed colour-rich video – although I’d love the option to shoot at higher bit rates – it’s responsive and predictable in flight, and the battery lasts an absolute age.

Plus, it’s light enough to come in under the threshold for drone registration; for peace of mind, however, I’d advise you register it anyway. It will be far easier, if anyone questions you, to simply show your registration documents than attempt to explain how and why it comes in under the limit.

Sure, the Mavic Mini is limited in some ways. If you want to capture the ultimate aerial panorama or hyperlapse movie, you’ll have to consider purchasing a Mavic Air instead, or Mavic 2 Zoom or Pro. But as a drone you can carry anywhere, and stow in pretty much any bag, it’s unbeatable.